Through the eyes of an injured athlete 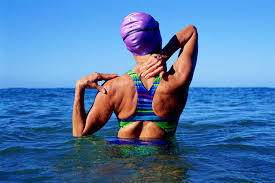 Playing a sport can be as rigorous as you want it to be. It can be something you do for fun or something that consumes your entire life. Having swam competitively since I was four years old, it has taken up a majority of my childhood. Unfortunately, at the age of 13 I started developing a pain in my right shoulder, which ultimately led to a major shoulder surgery the summer before my freshman year of high school.

Middle school was definitely the peak of my swimming accomplishments. I was scoring really well at my meets, achieving multiple best times, and qualifying for state and zone meets. Before my surgery, I was only two seconds off of making a state cut for high school swim. I wanted to swim in college. Swimming was my entire life. Until July 11, 2017.

The surgery prompted me to sit out of my freshman season on the swim team. That on its own was a major setback to my swimming career, but I didn’t let it stop me. I continued to practice when possible so I would be ready to swim my best during my sophomore year. Sophomore swim season came around, and my shoulder hadn’t recovered to the extent I had hoped. Still, I persisted and tried to swim as best I could the entire season. I achieved a few best times here and there, but nothing close to the goals I had set for the season.

Then came junior year and I felt so defeated. I should have been fully healed, but I was nowhere close to where I wanted to be. Not making the qualifying times for the MISCA or state meets was very degrading towards my mental health. Having to sit out of practice because it hurt too much or not swimming in meets altogether broke me down more and more every time.

My coach is very goal-oriented, so at the start of each season, we each came up with at least three goals we wanted to achieve over the course of that season; my problem was that I never achieved them. After the hardships and realizations of my junior year, I did some reevaluating. My only goal for my senior season was to simply have fun. That is exactly what I am doing. I couldn’t swim in the meet on Tuesday, but instead of getting super down on myself, I turned it into an opportunity to cheer on my teammates instead, and I had fun doing it. I’ve started to realize what is best for me and my swimming career.

After this season is over, so is my time as a swimmer. Although twelve-year-old me would think otherwise, I have found what is best for me. It took three years post-surgery to figure it out, but I have learned to be content with my current situation. I would never wish an ongoing sports injury on any athlete, but if it occurs, it’s okay to step back and reevaluate the situation.

Sometimes taking a step back can set you two steps forward in the long run.