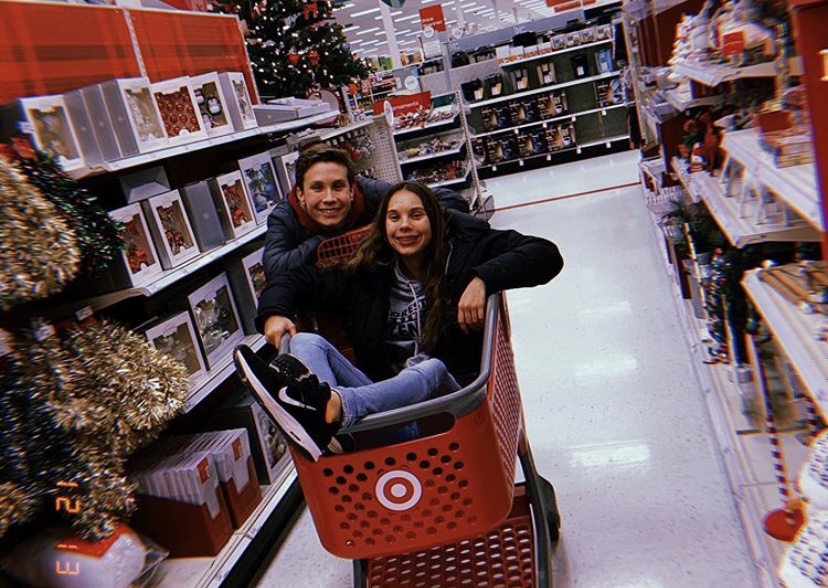 Ashley (in the cart) and her brother, Mason, inside a Target

Influenced by her brother, Mason, and his theatre involvement, sophomore Ashley Yarnell was aware of at least one area of interest for herself when she began her freshman year of high school. But the spotlight didn’t call to her, rather the more inconspicuous aspect of the stage did.

So Ashley joined stage crew, specifically deck crew. Now, in her sophomore year, she has formed ties that she attributes to the time she’s spent with her fellow stage crew members, getting to know each other better through collective contributions.

“During the performance, we sit in Demeester’s room normally,” Ashley said, “and we can all play card games or something or talk, and then we’d go out a little bit before behind the stage and get everything we need. And then when the act is done, we’d go out and switch everything and then bring everything back.”

In the time she’s spent as a part of crew, Ashley feels it’s changed her. With nearly three more years left in her high school career, she hopes that she can follow the path to some level of a leadership position. This currently entails simply following instructions and offering help whenever she can, specifically while she sticks around after school waiting for Mason to drive her home.

Ashley’s relationship with her brother is a strong bond. They’re more than just siblings; they’re close friends. His role in her theatre experience is only one of the many ways that her family’s impact has precipitated Ashley’s interests.

Ashley’s instrument of choice—the trumpet—is a product of her father’s own musical leanings in high school. She picked it up not only because it intrigued her, but because she counted on her dad’s capability to help teach her.

The sentiment also applied to Ashley’s two sports: golf and softball. In the case of golf, Ashley had been putt-putt golfing before, and her dad would occasionally bring her on the course with him. So the summer before her freshman year, Ashley picked up golf as a more regular hobby, and ended up making the JV team that year.

“It’s just kind of fun,” Ashley said, “and the team and getting to know different people in different teams at tournaments is really fun. It’s sometimes frustrating if you’re getting bad [scores] consistently, but it’s fun if you’re doing [well].”

While Ashley took a short break from golfing after last year’s season so she could focus on softball, she started practicing again this summer, and ended up making varsity as a sophomore.

Despite golf being a relatively new hobby for Ashley, she’s soared to the top and found a community within it.

Softball, on the other hand, has played a much more integral and long-lasting role in her life.

“I started playing way back in the day—I don’t even know what age I was—because my dad played baseball,” Ashley said, “and he coached my team when I was really little. And then I just kept on playing, I guess.”

Softball seems so right to her, such an obvious and logical part of her world, that Ashley can’t even quite identify why she’s continued with it for so long. She tends to play outfield because she finds a thrill in catching the ball as it soars down towards her, but the biggest rush comes from being on the base.

“On the base, especially if you’re on third and you’re trying to steal home plate, it’s an adrenaline rush a little bit,” Ashley said. “When you’re on the base, if the ball goes past the catcher, you can go and try to steal, and everyone’s like ‘whoo go!’”

But the energy while playing is entirely different when Ashley’s family shows up to watch her play, which they often do. In any of her activities, their support means a lot to her and pushes her to put forth her absolute best effort.

For golf, although walking the course often deters people from coming, her family’s presence, while at times nerve wracking, can even subconsciously help her hit better. And in crew, although the lights are off and she can’t see into the crowd, she always knows her parents are there, supporting her.

She feels a certain responsibility to show her family all she’s capable of as they’ve propelled her onto her path in life.

“[Them being there] makes me more aware,” Ashley said, “and it’s just different in a certain way. I don’t really know how to explain it. I feel like [I] try harder because [my] parents are watching or if [my] grandparents come to a game. They came to watch [me].”