Anderson uses the lessons that he has learned from his role models, sports, teaching, and adversity and passes them onto his students. 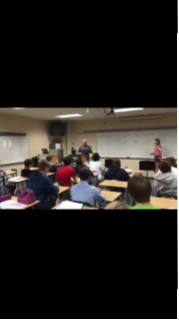 When someone takes a step into room 141, they are blasted with two things: history and sports. The wall on the right-hand side is coated in FHC posters from wrestling to football to every other Ranger sport imaginable. Under the posters sit spray-painted, cardboard shields with duct tape handles.  In the front corner of the room is a Corinthian helmet. Both the shields and the helmet are similar to those used by the Spartans. Teacher and coach Brad Anderson admires the Spartans way of life and has been influenced by them whether he knows it or not.

Anderson’s posters chronicling FHC sports from 2010 to 2016 take root in his love of sports. He wrestled in high school and gained a love of sports through his love of wrestling.  Any sport with a degree of physicality piques the interest of Anderson. Sports intrigue Anderson for another reason as well.

“I just love sports in general,” Anderson said. “I really believe sports is an extension of the classroom. There are things that you can learn on the field of athletics that you can’t learn in a classroom.”

The first lesson he learned from sports, and specifically wrestling, was how to handle adversity. Adversity, according to Anderson, is something that challenges a person or is just hard enough that for a split second a person has to stop and think about how they will take on a challenge. However, Anderson’s idea of adversity extends outside the realm of sports.

“Adversity can be in the classroom,” Anderson said. “It can be on the field of play, but there can be real life adversity which is the people in our armed forces. People who lose their loved ones and people who experience tragedy, that’s another form of adversity. I think adversity, simply, is life’s challenges, large and small.”

When this adversity hits, Anderson calls on his life motto: improvise, adapt, and overcome. He uses this to find ways to get around and plow through his challenges. He uses this motto in combination with role models, such as Teddy Roosevelt, to motivate him even further.

“[Teddy Roosevelt] has always been my favorite person,” Anderson said. “About the age of 27 or 28, I said I really like this guy, and I admire him, but am I like him? Am I being adventurous and am I seeking out challenges? That’s when I started training hard, and I want to bring that to my students.”

Anderson wants to challenge his students in the same way he challenges himself in order to prepare them for adverse situations. He knows that real world challenges come from experiencing the real world. This point of view reflects all the way back to his time at FHC.

“I never did homework,” Anderson said. “I did it all at school. I never took work home. I believed in maximizing the time of the day. It wasn’t uncommon for me to go to the media center during lunch or get to class early because I was so busy after school. If I wasn’t busy, I wanted that time to myself. I work that way as a teacher too. I work my butt off from 7:40 to 3:15 and when I go home I’m with my kids and I’m devoted to my wife. I think that’s the way people need to be. I think there is a difference between working hard and working smart and hard.”

In high school, Anderson was busy with sports, specifically wresting. After his school day, he used his time to practice and work to achieve his goals. Anderson would go on to CMU and wrestle there. Wrestling and a great work ethic forged Anderson into the person he is today.

“I used to think for a long time that I was better [than others] because I wrestled,” Anderson said. “Over time and with maturation, I’ve understood that I wasn’t better than anybody, but I was better for it. I think everyone needs adversity in their life. I needed wrestling in order to become a man. It was a right of passage; it was very difficult.”

His wrestling coach at FHC was Dave Mills. Mills and many others were role models for Anderson. He was able to use their lives as a model for his. Anderson is extremely thankful that he had great role models in his life to make him the man he is today. One role model is his dad, a man like “Teddy Roosevelt and Davy Crocket rolled into one.” Another is his mom, who is always there for him and at every wrestling meet whether he coaches or wrestled at it. Lastly, Mills is a role model for both coaching and parenting.

He took all these lessons into his teaching career and mixed those lessons with another. He loves to have a sense of community. He never knew he’d be back at FHC as he wanted to be a businessman. With a love to travel, Anderson gained a love of world history and geography. When he decided on being a teacher of world history, there was no other place to go besides FHC. Anderson wanted to come back and put himself in the community that he loves.

Throughout his time at FHC, Anderson has put a large focus on creating relationships with his students and fellow teachers alike.

“[Building relationships] is number one,” Anderson said. “It’s not just [relationships] with me, but with each other, student to student. We all come into here with a certain set of friends. My goal is to break those down in a way and have you interact with people you maybe would never interact with if you didn’t have to.”

As a person Anderson is all about values, lessons, and being a role model to his students. He loves the Spartans as a part of history because they value toughness, community, and overcoming challenges. He loves the relationships and community that he has at FHC.