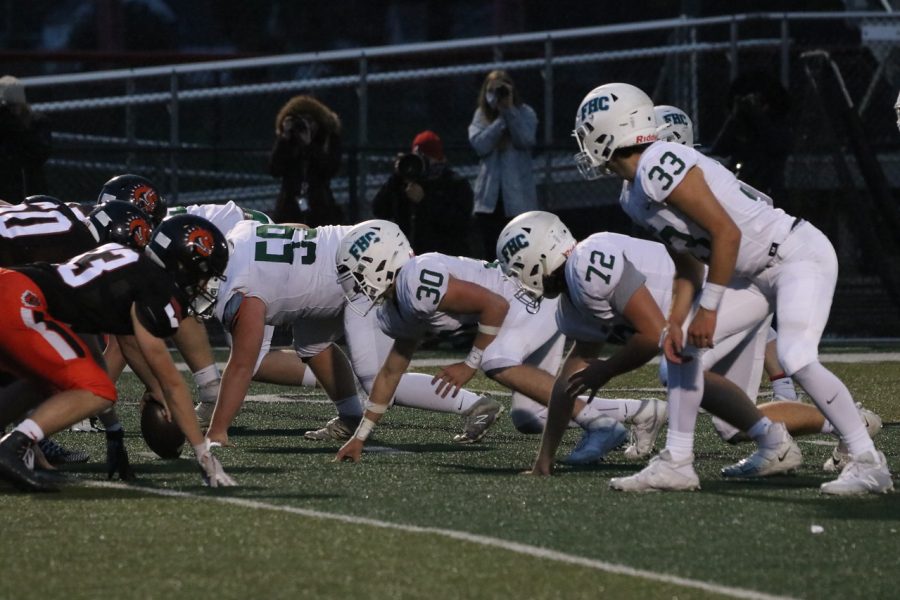 2020 has been an extremely rough year for FHC students and faculty, but seniors like Carson Deines have a lot of faith in the safety of our school and precautions being taken for FHC’s football games.

A lot of fall sports, only a couple of months into the school year, had been on the brink of being shut down; football was one of the many. Something FHC prides itself on is its football program: everyone comes to watch the football games in the student section, the band plays, the dance team performs, the cheerleaders put on a show, and much more.

“[In past years, the student body hyped up the football team] a lot, especially during huge moments in the game,” varsity football player Carson Deines said. “It was always nice to hear the student body.”

Although football season is coming to an end, the restrictions due to COVID-19 are starting to lighten. Just recently, it was announced that the spectator limit was raised to one thousand people. This increase made it so more students could attend, the band could play, and the dance team could perform.

“I was very excited knowing that the students were able to cheer us on again,” Carson explained. “Running out before the game and seeing everyone cheering us on makes the games more meaningful.”

While some of the restrictions are being lifted, most still stay in place. Carson was mainly just excited that he and his teammates could still play football, because, at the beginning of the season, football had been canceled. But, with more students cheering the football team on, it brings a whole other level of excitement to each game.

And, aside from the student section, FHC’s marching band brings a sense of familiarity to the not-so-normal games.

“I think that [the marching band] brings a lot of noise, especially with all of our brass players, and that noise and the familiar tunes that we play, the football players can hear and recognize,” senior Katie Ritzema said.  “And besides our music playing, we cheer very loudly. So I think all of that brings some hype to the team in general.”

Every normal aspect of high school that FHC’s students get back is uplifting and reassures that things will go back to normal soon enough. Having some form of familiarity is extremely important for the difficult span of time that COVID-19 has brung to the learning environment.

So, while students struggle to become familiar with five-day school weeks again, they can finally let loose every Friday night at the varsity football games. The positive atmosphere that is caused by the normality of FHC’s football games doesn’t go unnoticed; everyone that participates in the overall experience of the football games feels the hype surrounded around high school football each Friday.

“Part of the experience of going to a football game is the atmosphere,” Katie explained. “The band keeps the crowd fired up during the low parts of the game and adds entertainment both during the game and during half time. It brings everyone attending the game a sense of normalcy to not just hear quiet chatter amongst the crowd but the familiar music coming from the band.”

The Homecoming game this Friday will be the marching band’s first time performing this school year. But along with the band, FHC’s dance team will also be performing for their first time this year. FHC’s football games consist of so much excitement that adding the dance team back into the mix will make everything even better—everything is back to normal—which everyone wants to get back to as quickly and as safely as possible.

“We were very thankful for the opportunity [to perform this Friday] because of all the guidelines the school has to follow,” sophomore Megan Fox said. “Even though the assembly is canceled, knowing we are currently able to perform at our first football game this year makes us still excited for what is to come that day. It will be our first performance as a new team.”

While all of FHC is getting to experience everything surrounding the football games, the groups of people that are participating also get to experience new things because they haven’t gotten a chance to actually come together and perform, although most groups have been practicing this whole time.

And all of these groups come together to put a show on for the spectators, and since the limit has been raised, more people get to enjoy the joys of FHC’s football games. The student section will be louder than ever with the new amount of people that get to fill the stadiums. But along with more people, it means FHC’s student section leaders have to create more energy and volume from the student section so the football team can hear their support more than ever.

“The student section gets everyone excited for the games and riled up while they play and keeps people engaged to what’s happening on the game even if they don’t like football,” student section leader senior Anna Freihofer said. “It also gets more people out to the games and that encourages the guys a little more to having their school supporting them.”

The student section leaders want this year to feel as normal as possible while still staying safe. Following the restrictions is one of the main things in the sections leaders’ minds, but following that is how much the crowd is getting into the game. Football isn’t just about the game—it’s the overall experience.

“Expect to get rowdy and stay on your feet,” Anna explained. “Participate in the theme and cheers because we all come together as a little community during each game, and it’s a really fun and exciting way to kick off the fall every year.”