Nothing will diminish the spirit of the theater program 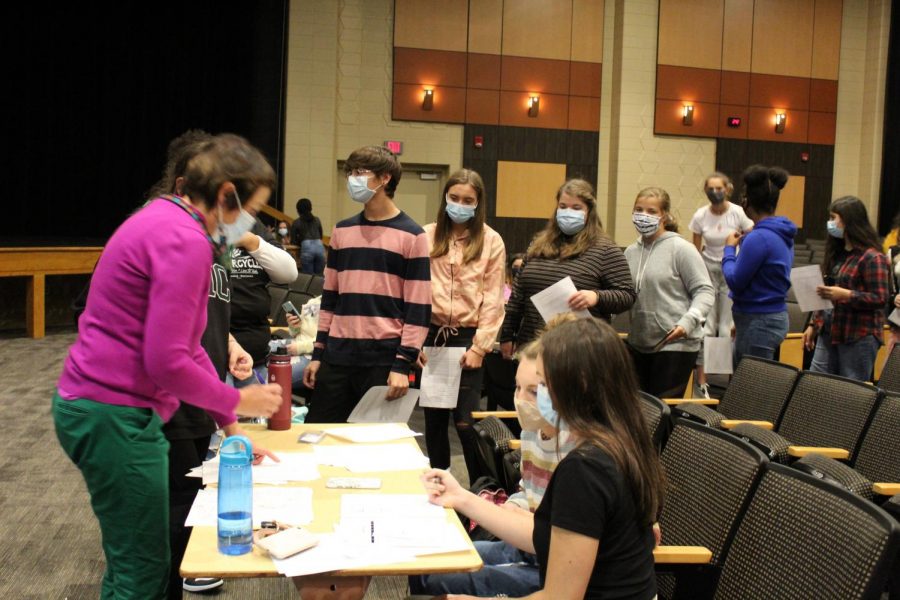 These are some of the words that describe the astonishing, hardworking students and staff that partake in our school’s theater program.

Numerous clubs, events, and programs, such as theater, have taken a rather large hit this year when it comes to the COVID-19 crisis, but the valiant efforts of the actors, stage crew, directors, and teachers who are involved have been pushing through in order to make this year the very best it can be during these trying times.

“I think [the] theater department this year has demonstrated our flexibility as actors, as directors, as teachers,” director and English teacher Robbin DeMeester said. “When you are doing a live production every single night, there are so many things that change and happen. It has definitely allowed for the flexibility to shine through. COVID-19 has made us think outside of the norms in theater, and I think that it has helped us to become more adaptable people within the realm of this type of art.”

Everyone, including the theater department, is adapting to the idea that this year, more than ever, we never know when something might change. But that doesn’t mean they aren’t without their struggles.

Last year, the spring musical got canceled in March due to the lockdown. This not only affected the cast and crew of last year’s play by not allowing them to show off all their hard work, but it is now sadly impacting the funds for this year’s theater budget.

DeMeester feels saddened by the fact that without the money from ticket sales from the spring musical, it is unclear where they are going to get the resources they need to go ahead per usual.

“A huge change this year because of COVID-19 is the lack of funds that we normally would have gotten from ticket sales from the musical,” DeMeester said. “That [money] would have then funded our following years full season of shows, but because we obviously didn’t get to have that show last year, not only did we go in the whole on those expenses for that production, but it does not give us a full piggy bank for this year either.”

However, even though the struggle is a very real problem, the dedicated students are not going down without a fight.

In efforts to raise some funding, they did a pop can drive over the summer. The students are so set on having as normal a year as possible that they took the time out of their own lives to collect people’s cans to exchange for money. Alongside this, they are also getting creative with the way they advertise this year in order to get maximum ticket sales at their shows.

The next show they have is quickly approaching, and support can still be shown for the amazing theater program through high participation.

“[We want everyone to know that] we are enforcing social distancing in the audience,” senior and performer Mason Yarnell explained. “We also tape off rows and seats so everyone can sit at least six feet from each other, and we’re having people keep their masks on while in the audience so it can be as safe as possible.”

Although these new changes may seem a little discouraging to the future of the theater program this year, it’s actually quite the opposite as everyone involved is more determined than ever to follow through with this year’s plans.

The masks have made it slightly more difficult to interact on stage, but these minor setbacks have in no way diminished the enthusiasm towards the progress of this fall’s production.

“Everyone is extremely energetic and really having a good time with everything,” Mason said. “All things considered, I think the fall play is going to be amazing, as well as hilarious.”

Many of the students that Mason works alongside would also agree with him: things like social distancing and masks are a necessary precaution this year, and although they have possessed some obstacles along the way—like all challenges they are working to overcome them.

“[This year] it has sometimes been more difficult to connect physically and emotionally on stage with masks,” senior and actor Ben Lowen said. “However, it’s in no way distracted from [our excitement], [these things are only] a small barrier that we work to overcome. Overall, there’s been great commitment and enthusiasm to tackle our new problems head-on by everyone.”

In fact, Ben thinks that these new changes have paved the way for some of the best talent he has ever seen.

Everyone has a thirst to prove themselves, and those who partake in the theater program want to show the world that its problems are no match for their talent. Nothing will put a damper on these students, not even COVID-19.

“I have seen some of the best acting, the best dancing, the best singing, and the best art during this pandemic,” Ben said. “The influx of a monstrous common struggle has united previously divided people and mediums and seeing people still find ways to come together to combat the horror we face has been inspiring and beautiful in a way that I never believed I would see.”

Even DeMeester herself has been shocked by how truly inspiring these students are.

“The students have done an incredible job adapting,” Demeester said, “from the show getting canceled in March, to now. The students have taught me through their attitudes and willingness to explore different ways for us to be able to do our art, and our talent and our passion has been nothing short of just glorious.”