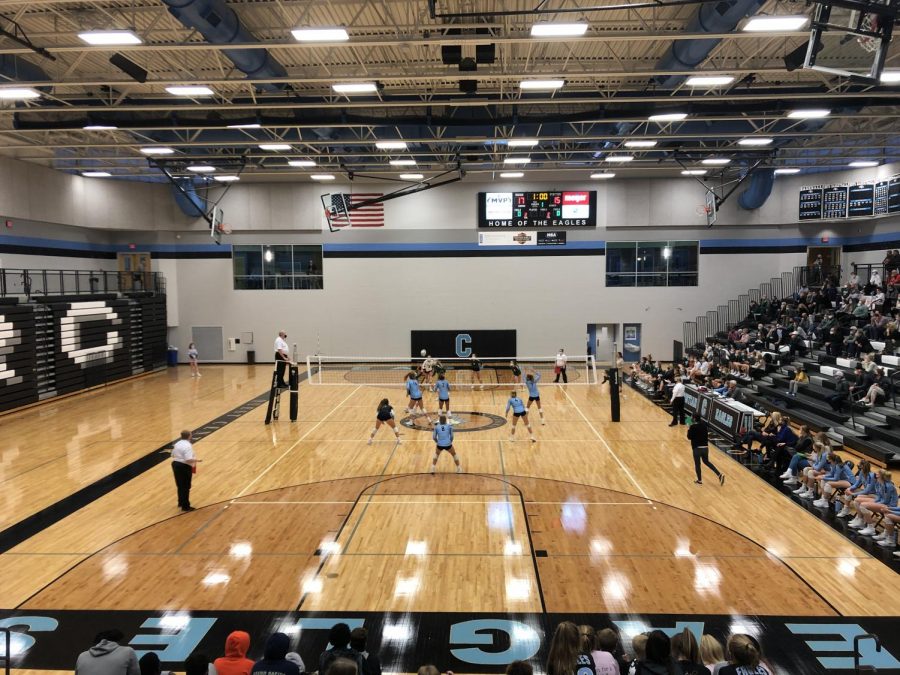 Last night the varsity volleyball team took on the two-time defending state champions, the Grand Rapids Christian Eagles, in the OK White Conference semifinals. After three close sets containing back-and-forth leads from both teams, the Rangers fell to the Eagles, 3-0.

As the first set commenced, the Eagles quickly took the lead; however, as the set seemed to be drawing to a close, the Rangers made a massive comeback, forcing an Eagle timeout with the score tied at 21-21. From there, the set continued bouncing back and forth between the teams, until the Eagles emerged victorious in the first set with a score of 28-26.

Despite their strong fight in the first set, the second set didn’t seem to fall in the Rangers favor yet again. The Eagles came out firing, starting off the set with a 5-0 lead. Their lead continued to grow, but the Rangers were still able to hold their ground and retaliate with several explosive plays against the Eagles defense. By the end of the second set, however, the Rangers fell to the Eagles, 25-12.

As the last set began the Rangers came out strong and were able to maintain a steady lead against the Eagles for the majority of the set, reaching their highest lead of the game at 14-6. They forced an Eagle timeout and were able to keep the momentum going until GRC made a comeback towards the end of the set tying it 21-21. The Eagles then proceeded to finish off the game, and win the last set with a final score of 25-22.

There were multiple players who had stand-out performances last night for the Rangers. Senior Julia Bouma had 18 digs, 27 serve receives, and six sets putting her at the top in both digs and receive. Fellow senior Morghan Tilton also had a phenomenal game last night with 50 assists, four attacks, and one kill. Lastly, junior Brooklyn Conner and sophomore Sarah Dunn combined for an astonishing 17 kills and 15 attacks.

The Rangers varsity volleyball team will play again this Saturday at the East vs. West Challenge. This tournament will begin at 9:00 am for the Rangers.