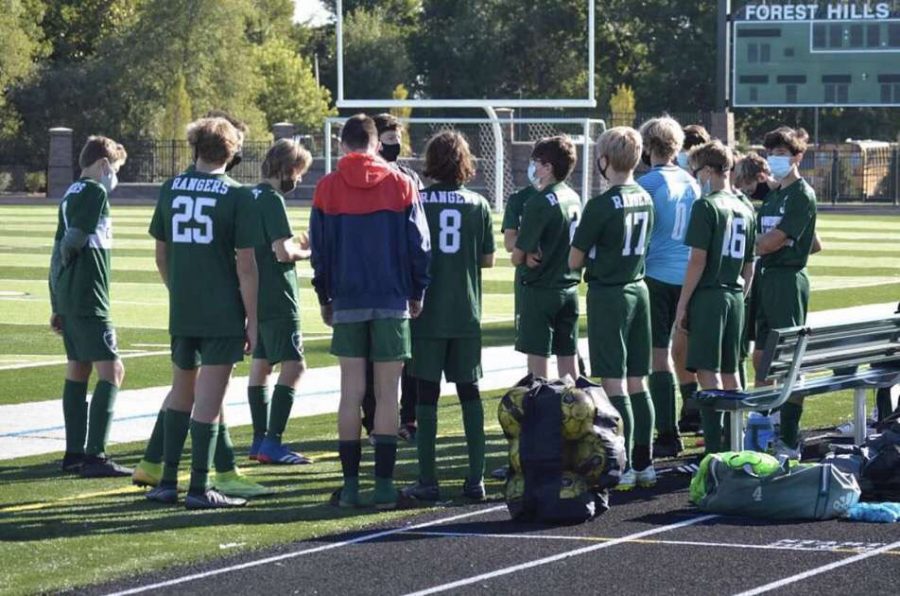 On October 12, 2020 the boys JV soccer team ended their season on a rain cancellation. This sums up their season as head coach Robert Otterbein said, “The season was a roller coaster for sure.”

The Rangers started the season off slow, as their first two opponents of the season were the Lowell Red Arrows and the Grand Rapids Christian Eagles. Both of the Rangers first two losses were heartbreakers in the second half by a single goal.

“We were trying to figure out what style of play worked for our team,” freshman Andrew Schepel said. “Making our free kicks and knowing what’s good for our team was a big part that furthered our success.”

The boys were not able to find their first win until they matched up against the East Grand Rapids Pioneers. This was the first game the boys were able to put everything together as a team and was the spark to their mid season hot streak.

Following that game, the boys had their confidence up, and despite not having freshman Jack Ballou—one of the Rangers starters—the Rangers put together a barrage of victories and were able to string an impressive four game win streak together. They started their domination by breaking the hearts of the West Catholic Falcons and scoring the game winning goal in the final few minutes to officially kick off the win streak. Entering their next game, the Rangers faced off against a new opponent to the conference, the Byron Center Bulldogs. The team found great success during this run by moving the ball through the midfield, and was able to show they had true potential as they dominated the Bulldogs in possession to gain their fourth win in a row.

However, following their next game with Forest Hills Northern, the boys lost their edge and started to struggle. The Rangers’ team morale took a blow following the FHN game as the boys took their worst loss of the season losing 4-1.

“The Rangers looked to forget about that game in their near future and take it as a learning lesson for the rest of their season,” said freshman goalie Lance Childers, “We have to rise up to the occasion and play our game.”

Looking to bounce back, the boys faced off against the Portage Northern Huskies in their eighth game of the season; however, the Rangers seemed to be in their own heads as Portage Northern was able to handily glide past the boys in a 3-0 loss. Entering the home stretch of the season, the boys faced numerous challenges ranging from important players getting hurt, all the way to losing players by being pulled up to the varsity team. Therefore, for the final handful of games, the team had under 13 boys rostered that were able to play. For the boys’ next game, they faced off against one of the bottom teams in their conference in the Greenville Yellow Jackets. Looking to get some momentum back during this game, the boys were unsatisfied with the 1-1 tie in full time after dominating the Yellow Jackets the whole game. Furthermore, the boys had one of the best teams they faced all year as their last game of the regular season, featuring the South Christian Sailors. The Rangers took a brutal 6-0 loss to the Sailors. Overall, the boys were not able to generate any offense for themselves at all during the game which troubled their spirits going into the conference tournament.

Later the following week, the Rangers had a rematch against the EGR Pioneers in hopes of getting back on track with a win in the first round of the tournament. However, East Grand Rapids out played the Rangers the whole game, looking for revenge from their first meeting and the boys were sent to the consolation game following the 1-0 loss. For the boys last game of the season they had another favorable rematch against Byron Center, although with several players pulled up to varsity and key players such as freshman Andrew Schepel and sophomore Tyler Poth injured, the Rangers were not the same team as before. Unfortunately for FHC, the boys would take a tight 1-0 loss to end the season as well as the conference tournament.

Throughout the Rangers’ season, a plethora of the boys stepped up on different occasions and were able to make huge impacts during individual games. Center back Andrew Schepel was one of the boys leaders throughout the whole season and was constantly a defensive presence all over the field.

“Andrew defiantly helped us get a couple of our wins with his impressive free kicks.” said Robert Otterbein.

As well as sophomore Noah Burr and freshman goalie Lance Childers contributed big things for the Rangers and both demonstrated excellent leadership qualities being able to always get the team to give it their all on the field.

Overall even though the Rangers finished their season 4-7-1, they showed tremendous potential throughout the whole season and several of the boys will be looked to in the future to make a big impact on varsity.