2020: Another triumphant year for the FHC equestrian team 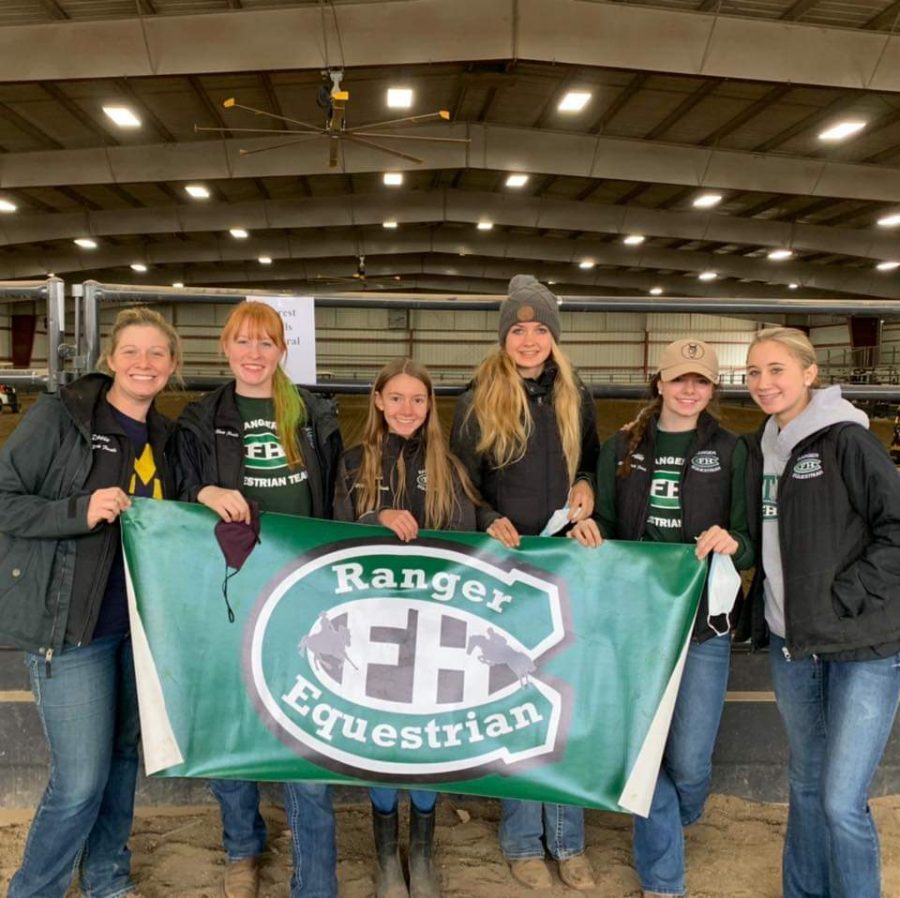 In a season of vast uncertainty and unpredictability, the Forest Hills Central equestrian team kept their hands on the reins and their winning culture on the saddle. Like most high school sporting teams around the nation, the FHC rough riders’ season was expected to be canceled and their team was held in a cloud of haze. Whether Covid-19 would have halted the season in its tracks or not, head coach Stacie Berendshobe and her team had their riding boots ready for action.

“The girls were pumped for the upcoming season and they were ready to go whenever the MHSAA gave us the green light,” Berendsbode said.

After the MHSAA gave equestrian the green light to commence with their season, the riders of FHC traveled to Barry County Fairgrounds for their 2020 inaugural meet against teams like Gull Lake and Maple Valley. During the meet, senior Alaina Briggs stepped into her prized role as team captain and filled up points in her allotted classes. Along with Alaina, sophomore Abby Satterthwaite—who taught her horse several new events over the off season—secured a first and second place ranking in jumping and western bareback. In the end, the team compiled enough points individually to notch a second place spot behind Gull Lake. Coach Berendsbode determined that her roster of riders put themselves in tremendous position to glide through the rest of the two district meets and into regionals unscathed.

“The points for all 3 meets accumulate to determine the qualifiers, so it was a very successful start to the season for us,” Berendsbode said.

On Alaina Briggs’s special senior night, the stallion squadron suited up for what was arguably the most vital meet of their short season. In fact, that third district meet was the last chance for FHC to maintain their number two position behind the powerhouse of Gull Lake. As stated above, the meet’s vitality for the rest of the season was enormous, and junior Claire Richardson and freshman Meghan Bonney chose the perfect meet to break out of the gates quickly: Claire snatched up the “highest scorer” for her team, and Meghan put up her very first points of her FHC equestrian career. Both of their unreal performances permanently solidified FHC a spot in the regional tournament.

“It was a very good meet for us and it felt good that all of our hard work paid off,” Claire said.

With states on the horizon, the ranger rough riders entered the rainy Berrien Springs Fairgrounds with anxiety and high expectations for themselves. Because jumping events kick off every equestrian meet, sophomore Abby Satterthwaite made it her mission to jump FHC onto the big board for Division C. Without a doubt, Abby’s resounding victory in the jumping sector of Division C gave her team a slight cushion going into day 2 of the two-day tournament. Sophomore Masyn Cole also continued to surmount the bad weather with her horse, Baylee, and she scored some massive points and patterns for her team. From her perspective, coach Berendsbode observed a team-oriented group of girls who had a chance to win states.

“All of our FHC riders put everything into their classes and it showed,” Berendsbode said after the exciting season.

As 2020 Reserve Regional Champions in Division C, the ladies of FHC glided into the all-encompassing MHSAA Equestrian State Tournament as one of the team’s to beat. Their leader behind the wheel, Alaina Briggs, choreographed the impressive organization of the team, and she even scored in all three events she competed in. Not only did Alaina step up to the plate, but so did—the “highest scorer” of the year for FHC—Claire Richardson. To be more specific, Claire won several 1st places in her saddleseat classes and one in Hunt Seat as well. A meet of this magnitude always seems to bring in the top talent of Michigan equestrian teams and the 2020 meet was no different; FHC ended up with a 5th place finish behind all sorts of decade-brewed talent like Lowell and Vicksburg.

All in all, the Forest Hills Central equestrian team heavily improved their last year’s 7th place State Finals finish and morphed themselves into a dangerous team in the coming years. No matter what, this team consisted of a senior, a junior, two sophomores, and one freshman who were undoubtedly filled-to-the-brim with equestrian expertise, and they traversed their way through a pandemic year full of dead ends and crevices. Even though Alaina Briggs’s career at FHC is over, the Claire Richardson show will have an encore to be reckoned with. Claire will be paired with both Masyn Cole and Abby Satterthwaite to bolster the team’s stock to an even greater extent in jumping events. Last but not least, Meghan Bonney should be on the radar for a breakout second season with the rough riders. With their back to the 2020 season, the FHC equestrian team has their eyes set on triumph in 2021.

“It was a great season and we had a blast! It was an honor to coach these 5 wonderful young ladies,” Berendsbode said.