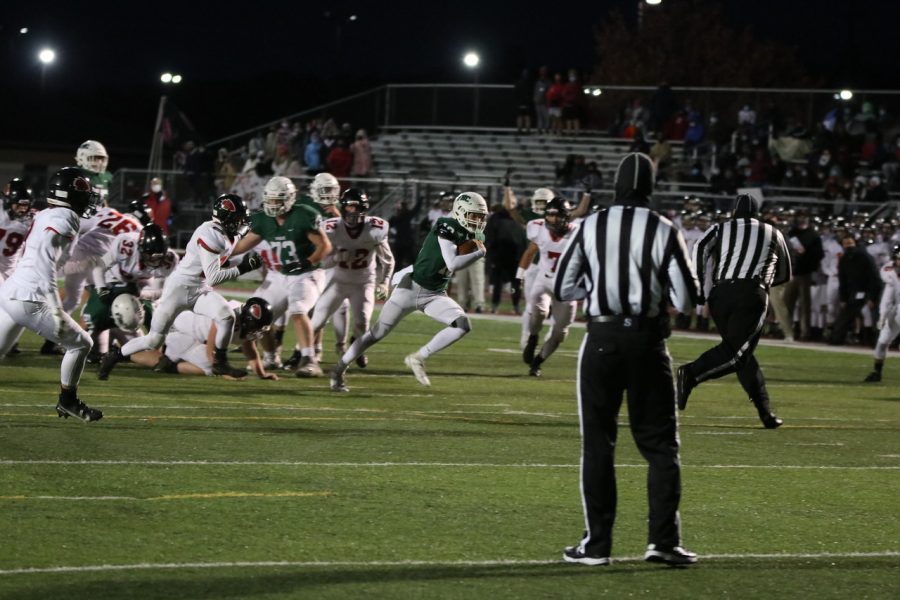 On Friday night, the stakes couldn’t have been higher for varsity football. It was the homecoming game against a rival school, and with a win, the Rangers had a chance of winning a share of the conference title depending on the Byron Center result. Junior quarterback Hunter Robinson took this opportunity to cement his role as the key figure in the FHC offense, going for a monster stat line with four rushing touchdowns, 208 rushing yards on 23 carries, and 62 passing yards on seven attempts. Hunter has definitely been important in the offense all season, but with the transition to varsity football from JV, it has taken some time for him to get completely comfortable.

“Each week, Hunter gets more comfortable and confident, It takes time to transition from JV to varsity, but it takes even longer at the quarterback position,” head coach Tim Rogers said. “Hunter has gone through some growing pains, but he has learned from them and gotten much better.”

Neither team could get anything going very early on, and senior Jonah Spates actually almost intercepted the ball on one of the first plays of the game, but he couldn’t keep hold of the football. The Red Arrows were still forced to punt from deep inside their own territory though, and the FHC offense took over.

Following a few stuffed runs and a penalty on FHC, the Rangers were put in a tough situation on 3rd and 17 from the 49. Hunter looked to senior Dallas Hopson—who has proven to be a threat in the redzone lately—but the ball was very underthrown and intercepted by Lowell’s Connor Lixie. Fortunately for the Rangers, the defense remained strong yet again, and Lowell punted for the second time in just as many possessions.

Despite the interception, the FHC offense went right back to the passing game. On 3rd and 11, Hunter found the hands of junior Benny Scholler for the conversion and a 19-yard gain into the Lowell half. Hunter then started to take over from there, capping off the drive with a 17-yard touchdown run on a read-option. With 3:01 in the first quarter, the Rangers finally drew blood first.

On the very next play, things started to take a turn for the worst for the Red Arrows. In a scrum on the handoff from Lowell’s Doak Dean at the Red Arrow 9-yard line, the Rangers recovered the fumble and had the offense in very threatening territory. Hunter ran the first play for seven yards, and with some hurry-up offense in the mix, he ran the ball in seconds later from two yards out for his second touchdown of the game. Play after play, there were massive holes at the line of scrimmage, and the Ranger offense was flourishing.

“The offensive line just really seemed to be in-sync,” senior Mason Wiltz said. “The backs were hitting the holes hard too, which just made our job even easier.”

FHC’s momentum was lost for a bit, but the defense picked up the pace and forced another punt with seven and a half minutes to play in the first half. Hunter went back in the air for the next big play, finding Jonah over the top for a 31-yard grab. Jonah was free and the ball was slightly underthrown by Hunter, but Jonah leaped for the jump ball and made the catch over the Red Arrow defender. Then, from a yard out, Hunter ran it in again himself, scoring his third touchdown of the day and giving FHC a 21-0 lead with 3:10 to play in the second quarter. Both lines for FHC were dominating, but the offensive line led by Mason and junior Will Richardson is what was creating the points on the board.

“We won in the trenches because we won in the weight room,” Rogers said. “Our offensive and defensive lines were just more physical than they were.”

After taking over again, the Lowell offense had a couple of threatening plays early, but the Rangers forced yet another punt from the Red Arrows, giving FHC the ball back with less than 90 seconds to go. On 1st and 10 from the FHC 29-yard line, Hunter found success on the read-option yet again, faking the handoff to junior Tyler Weaver and finding a massive hole in the middle. He took off for a 60-yard run, and the success on the ground continued as junior Jacob Bonnett took the handoff on the very next play for a 10-yard touchdown run. At the half, the Rangers held a resounding 28-0 lead.

Hunter agreed to Rogers’ earlier point on the success on the ground, noting the line’s ability to dominate the physicality aspect of the game.

“We saw that they weren’t the most physical up front, so we wanted to just keep pounding the ball between the tackles,” Hunter said

To start the second half, Hunter showed his prowess on the ground once again. He started with a 20-yard run himself, immediately followed up by another first-down rush. Continuing the theme of hurry-up offense, the Rangers ran quite a few plays in a short amount of time. On 1st and 10 from the 14, Hunter found a hole led by junior Carter Kelly that enabled Robinson to reach the endzone for his fourth and final score of the game. Running five minutes off the clock on the first possession of the half, the Rangers all but officially clinched the game with the touchdown and a 34-0 lead.

Closing out the game, the Rangers were able to rotate guys in like they have been able to do for much of the season. Lowell was able to get two scores at the end, but it had little effect on the game.

With the final score of 34-14, FHC finished the regular season with a record of 5-1 and a win against a storied Lowell program that the Rangers have had the advantage over the past few years.

“Lowell has a great football history,” Rogers said. “It is a confidence booster having success against a reputable program.”

Also, thanks to East Grand Rapids taking down Byron Center, the Rangers won a share of the OK White conference title.

“This is a very good league, and it is an honor and accomplishment to say we are co-champs,” Rogers said.

Hunter agreed but added the team wants more and isn’t satisfied with just the co-title.

“Obviously we want to win it outright, but considering we were able to keep fighting all season to end up with a share of the title, it felt very rewarding,” Hunter said.

Next week, the Rangers will open their postseason campaign against Forest Hills Northern, a team FHC took down 28-13 earlier in the season. The Huskies are coming off a string of three consecutive wins though, and they have things rolling at the right time. The game certainly presents a challenge for FHC as FHN will be looking to earn its first win over the Rangers since 2004. Rogers is excited, but also ready to get back to work to improve the team’s discipline ahead of Friday.

“There are still too many avoidable penalties on offense, and we can still get much better in a variety of individual techniques on defense,” Rogers said.