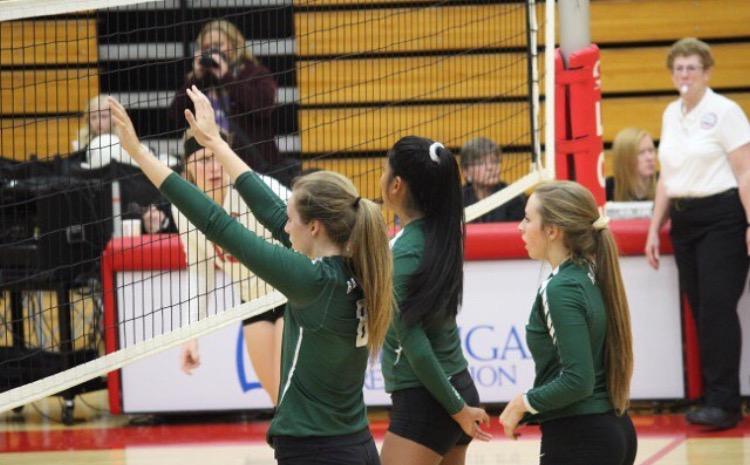 Volleyball first started for senior outside hitter Reese Weslow in fifth grade when she went to camps and played in her jeans with her playmates. Since then, Reese has come a long way. Reese has grown into a talented volleyball player and has been on the Varsity team since her sophomore year. Head coach Lauren Heinz recognized Reese’s talents early on.

“I remember when Reese was a freshman,” said Heinz, who is in the middle of her fifth year as the head coach of the FHC varsity volleyball team. “I would always pull her over and have her play with varsity. I honestly considered maybe bringing her up as a freshman.”

However, Heinz made the decision to let Reese develop on JV her freshman year.  Heinz knew that she wanted Reese on her team for the years to come. This decision was made largely in part to the fact that the varsity team had plenty of hitters that season.

“Aside from Emily Campbell, who graduated Reese’s freshmen year, she is probably the next hardest hitter we have had in this program over the past eight years,” Heinz said.

Reese will follow Heinz’s steps and play volleyball at the collegiate level. At this time next year, Reece will most likely be knee deep in school work and volleyball at Miami (of Ohio) University. Reese verbally committed to Miami in the middle of July after she attended their volleyball camp.

Any collegiate sport requires a high level of talent and dedication. Anybody that knows Reese and has seen her play would most likely agree that she brings both of those aspects to the table. The team definitely would agree, and that is why she was named a captain for this season.

“Her leadership style is more lead by example,” Heinz said. “She can go out on the court and get things done.  People respect her for that, and they feel like they can count on her.”

Reese has certainly led by example and is in the midst of helping lead FHC to a great season of becoming potential conference champions. This season, FHC finds themselves with a very good overall conference record of 6-1. Beyond conference lies districts, a place that the Rangers found last year but where they ultimately lost to Rockford. FHC will certainly be looking to win districts this year to make up for last year’s loss. Reese says that making it to that game last year was her best memory of high school volleyball thus far.

“I mean we lost, but it was still fun to make it that far,” Reese said. “Our team hadn’t made it to district finals in a long time.”

Fortunately for Reese, regardless of this year’s outcome she will continuing playing the next four years. Reese has been playing volleyball competitively year-round since seventh grade. Needless to say volleyball has been a cornerstone for Reese throughout the past six years.

“I like having schedules,” Reese said. “I feel like I wouldn’t know what to do in college if I didn’t have to go to practice or do stuff with the team.  That will be nice to always have something to do.”

The constant schedule of balancing school and volleyball is certainly tough. That is why senior defensive specialist Sabrina Harrison will put her sole focus on school and campus life as she plans on attending University of North Carolina at Chapel Hill. Sabrina will definitely miss having Reese around as both a teammate and a friend once they go their separate ways this summer.

“She is a very nice person in general,” Heinz said. “I know that all the girls feel that they can go talk to her if they have any troubles; they are not afraid to approach her.”

Reece’s easy going attitude is something that a lot of people have gravitated to. Many will miss her presence as much as she’ll miss theirs.

Reese will be blazing a new trail for herself by taking on college volleyball and either pre-med or kinesiology. In some regards, college will be an adjustment and a bit of a learning curve. However, Reese will find herself right at home in Oxford, Ohio next year.

“You can talk to her about anything,” Sabrina said. “You can go up to her if you have a problem; she’s so amazing.”