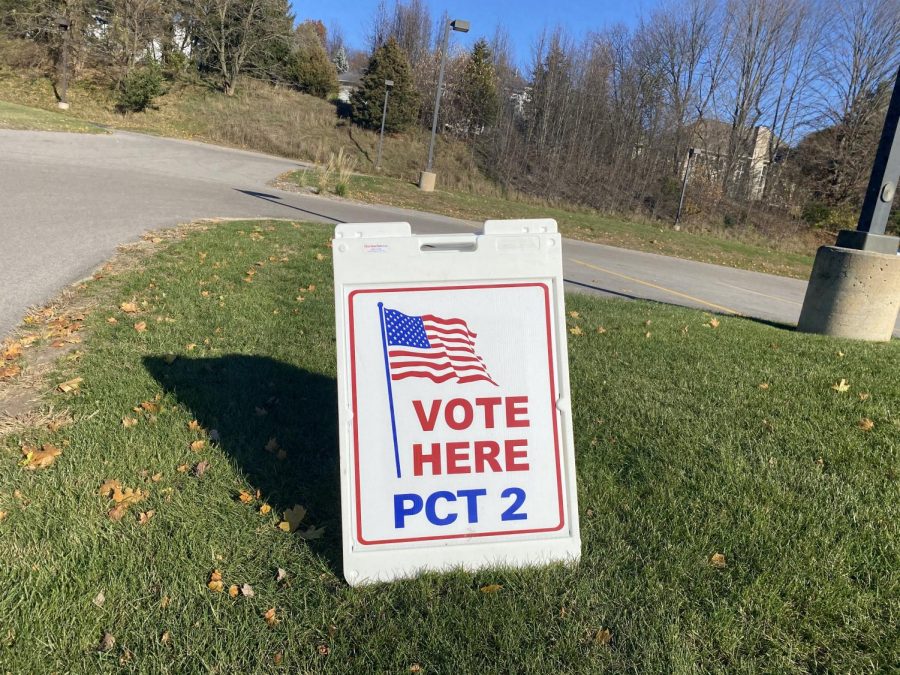 In the below-fifty-degrees-Fahrenheit chill and at only 7:15 am, the people have already congregated. The lines meander out the doors of each polling location, lines that at some point today will include senior Rebecca Dooley, side-by-side with her mother, as a first-time voter, contributing her voice to one of the most influential occasions in American history.

And while it looks drastically different than ever before, blending in with the year’s landscape, the weight that this election carries doesn’t change Rebecca’s choice to vote.

Throughout high school, she’s been committed to political awareness and activism; her involvement in Model UN and PACE Club have expanded her consciousness of the current world condition. But, although her life perception was limited at the time, it’s the past two elections that were Rebecca’s first experiences observing the antics of politics.

Only three presidencies have occurred in her lifetime, but even memories from the earliest years of her life play into the personal significance of those presidencies.

“I remember in kindergarten when Obama was running and eventually was elected,” Rebecca said. “That was a big deal, in our community especially. That polarizing issue of race—I remember that being a big conversation. And that left a big impact on me, thinking, ‘Oh, that’s really weird that he is the first black man to be the president after all these years.’”

Eight years later, the next election also solidified itself in Rebecca’s memory. In eighth grade this time, she recalls recognizing the salient nature of that election and the impression it left upon her, but even then, she admits she didn’t fully grasp how that election set the stage for today’s events and political climate.

Now, with the power to place her vote in this election, Rebecca is acutely aware of all that her possession of a vote means. As a minority in more ways than one—a POC, a woman, and a member of the LGBTQ+ community—her vote wasn’t always a given.

“I appreciate and recognize the long, bloody history of that fight for me being able to [vote],” Rebecca said, “doubly [as] a person of color and a woman, and in some areas, I would be, not legally, blocked from voting for being gay, which was less so a legal battle than it was a social battle. But all of these things had to come together at specific times and specific places that allow me to have that right to vote today.”

So, as she marks her ballot, Rebecca won’t take that responsibility lightly or for granted, and she doesn’t believe anyone else should either.

Voter turnout in 2016 was only around 60% of eligible American citizens, with several million potential voters abstaining. Rebecca attributes this to a less than ideal cycle of apathy among Americans; people choose not to vote for whatever reason, a result occurs that is “not viewed favorably by the majority of the country,” so more people turn out to vote, reconciling the situation, but then people become passive again and choose not to vote again.

She personally holds the opinion that if more people had exercised their rights in 2016, the results of the election may have come up differently. But, despite her confusion concerning the mechanics of the cycle, she’s grateful that it’s propelled more people towards the voting booths this go-around.

The idiosyncrasies of all of her experiences have coalesced into the full picture of her views, a picture that is uniquely hers. She takes great pride in her ownership of her political opinions, especially as she developed them without the influence of even her mother.

During Rebecca’s childhood, her mother chose to keep politics out of the home, inciting Rebecca to be genuinely more educated in her ways. Now, she can stand up for what she believes in and stake her vote with confidence.

“[The lack of politics] forced me to go out and form my own opinions,” Rebecca said, “where you see a lot of kids at our schools don’t have opinions that [they] would necessarily call their own; they’re their parents. And you can tell because they’ll say, ‘I believe this,’ but they’re completely unequipped to tell you why.”

But while this may be the case for some students who have been influenced by their parents’ political views, junior Adam Hop is grateful for the guidance his parents have provided him in the political arena.

While he’s adopted his personal opinions from his parents, he doesn’t believe that they’re a mere mimicry of his parents’ and rather considers them to have evolved into opinions he can genuinely claim as his own.

Adam assesses that his parents have told him “the truth about everything” and taught him “to only follow the truth.” Additionally, he looks positively on the opportunity to witness voting firsthand on the occasions that his parents have brought him along to the polls with them while he remains under the required voting age.

Adam wholeheartedly wishes he could cast a vote this election, aligning with the public opinion that this election is perhaps the most monumental presidential election of all time.

“[Voting this election] is very important,” Adam said. “It is the most important election of our lifetime, and it doesn’t make it any better that we fight and bicker about every little thing politically if we disagree. Let’s respect other people’s opinions, and go along with our way of life.”

Whatever it means for people to vote, and whichever direction they vote in, Adam is in support of their constitutional right, but he recommends the use of absentee ballots rather than mail-in ballots, believing this will better ensure every vote to be counted.

Adam will be of eligible voting age by 2021, and he doesn’t plan on hesitating for a moment when it comes to partaking in the next available election. Adam considers voting in America to be a great privilege and one that is ensconced in pride.

“I know that my voice will be heard,” Adam said, “and then I know that I will have done something very special. Everyone who votes in the U.S. should take pride in what they are doing for their country. And yes, 100%, [I am proud of contributing my voice because] I know that my vote could be the determination between a Democrat-controlled or Republican-controlled Senate, for example.”

The gravity of a single vote is a sentiment that senior Amelia Pointer has also emphasized. Especially considering Michigan’s status as a swing state, where the outcome could easily go either direction, she implores fellow eligible voters to make the important choice and cast their vote.

The upcoming election’s contentious qualities spurred forward Amelia’s pre-existing eagerness to vote, and she voted absentee prior to Election Day itself. While this did mean foregoing the iconic sticker, a fact Amelia was a bit disappointed at, she felt that going to a polling place on Election Day might not be a possibility for her schedule and that it was a COVID-19 risk she wasn’t willing to take.

It’s this very nature of the world currently—the pandemic, the fights for social justice, the massive political controversy—that marks the significance of the vote. But as much as the state of the world is a cause for concern, Amelia acknowledges that it has also opened doors for discussion and life experience.

“It’s nice when you find people that are like-minded,” Amelia said, “but, at the same time, because we are exposed to people that have drastically different views than us, I guess it’s nice to know where people are [and] at least try to understand where they’re coming from and kind of prepare for the future, not always being on the same page as other people, and learning how to deal with that.”

Amelia hasn’t been afraid to be vocal about her opinion in recent times, and it’s certainly allowed her to delve further into a discussion with people whose views are occasionally difficult for her to understand. But these discussions, and the climate of life right now, have contributed to her understanding of the privilege that comes alongside choosing not to speak up or choosing not to vote.

“If you have the option to vote and you don’t, that means that your life is okay enough that you’re in that position where [you’re] not going to be affected either way,” Amelia said. “Whoever wins [you’re] going to be fine. And that’s a major privilege.”

From Amelia’s perspective, and the perspective of a vast portion of the population, there is nothing ignorable about the way the world looks right now, and the predicted high voter turnout this year does more than suggest that many citizens see voting as the solution.

The desire that many share is a desire for change. And perhaps the only thing guaranteed in this election is that it will change our nation forever.

“It literally takes wake up calls for people to start paying attention,” Amelia said. “These things are happening, and people know about it, but because these big things have been occurring, you can’t ignore it anymore. Hopefully, it starts to spark some change, you know? People are trying; people are getting out there. I just hope that it’s not all for nothing. I really hope that some change comes from it.”