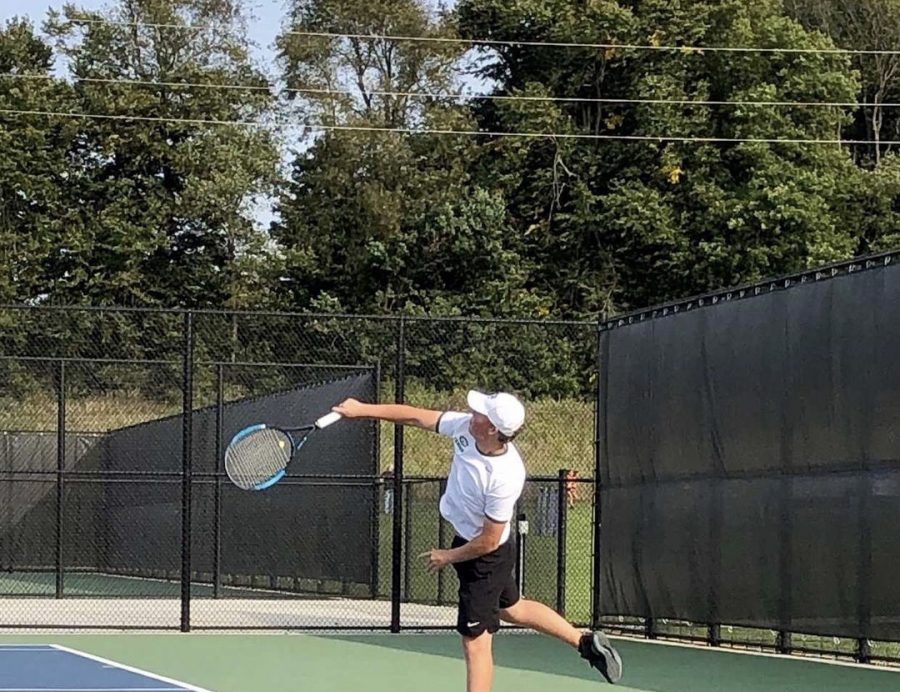 Sophomore Luke Brown has had the pleasure of being able to take his own passion and pass it on to others while still being dedicated to his own growth.

“I taught tennis to ages five through adults,” Luke said. “I have always been interested [in teaching people], and since tennis is such a big part of my life, I always feel a great sense of pride when I get to pass on what I know to other people.”

Some feelings are hard to explain, but when Luke is able to see the improvement of the people he teaches and how happy it makes them, that is a feeling that can only be described as pure joy.

Not only is it a great accomplishment of Luke’s, that he is able to influence the lives’ of his students, but he has also made a great impact on his peers through his unmatched passion for tennis.

With some persuasion, Luke was able to convince a few of his friends to do tennis with him this year. He believes that one of the sport’s best qualities is that anyone can do it. Although it will require dedication and effort—as most things do—it’s not something you have to have done your whole life in order to be good at it. With the right balance of time, commitment, and a willing attitude, tennis can be fun even for beginners.

“At times it can be difficult and even a little funny since my friends have never done it before,” Luke said. “But I really believe that they have a fun time with it, and so does the whole team. I don’t think you have to be really experienced to start tennis, and since my friends were looking for something to do, I suggested it, and now we all have a good time.”

On many occasions some of Luke’s best memories with his friends and teammates are as simple as listening to music, having those carefree moments, on the bus ride home after winning his match.

These are the times Luke values with his friends because life can be overwhelming, and sometimes hard to manage, especially when you’re involved in extra activities such as tennis. However, Luke believes this shouldn’t stop anyone from being able to let go, and have a good time with your teammates when you know you’ve earned it.

He believes it’s these types of memories that are going to be the ones worth remembering.

Tennis has brought Luke so many things: bonding moments, leadership skills, adaptability, and, above all else, it’s a place where he can be who he wants to be without having to worry about judgment.

“I have a good time with the team—on the busses, and really whenever we are together—it’s always a chance to have some fun, and let go a little bit,” Luke said. “When you’ve won your matches, it’s a good feeling knowing that you did your team good.”

Although Luke doesn’t view himself as an extremely competitive person, he always wants to play his best so he can show his peers how much the sport means to him.

With all of Luke’s success this season, It’s a goal of his to be on varsity next year. After playing for five years, him and his teammates believe he has the passion, drive, and skill to make the team.

“I worked up the season to play with varsity at the end of the year,” Luke said. “So hopefully next year I will make the team. [When I am having doubts], I always tell myself to take things slow, and just keep in mind that I am working towards something.”

Dedication and time management is something all high schoolers struggle with, but Luke has handled his time gracefully as he attempts to prioritize school, tennis, friends, and of course family.

However, some of his time management is made easier because of how supportive his family is along with the fact that his friends participate in the sport with him.

“My parents have always been really into the idea of me playing a sport,” Luke said. “Their support has been super important and helpful in the success of me being able to play tennis.”

Luke’s support system, from his friends, family, and teammates, alongside his own love for the sport, is what keeps him engaged even when things seem down. He believes it’s important to stay focused and always have your goals in the back of your mind.

“You [have to] do what you have to do,” Luke said. “We don’t always want to put in all the effort it takes to play at our best, but you have to do it anyways if you want to get better.”