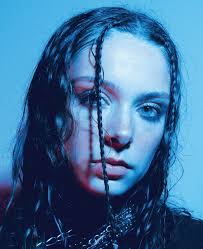 Comparable to seemingly all of my top artists—most notably Maggie Rogers and Phoebe Bridgers—Holly Humberstone’s sound is an eclectic blend of foggy undertones and brooding lyrics and abstract beats.

Seemingly genre-less, Humberstone’s intimate conversational lyricism defines her EP, Falling Asleep At The Wheel, a six-track endeavor that encompasses everything I cherish and value and adore about music.

With lyrics so impactful I’d get them tattooed on me, with guitar so dark and brooding that it darkens the blue skies in the best way possible, with vocals so delicately powerful that it sucker-punches me in the gut and steals every breath, Falling Asleep at the Wheel is one of the most impactful EPs I’ve listened to in a really long time.

Each track seems to defy all standards of the Indie genre; “Falling Asleep At The Wheel” follows in Maggie Rogers’ footsteps on the more Indie-pop side of the spectrum. With fluttery vocals, poetically powerful lyrics, and an airy pop sound, the EP’s title track is a silver, shimmering song—one that first introduced me to Humberstone’s discography.

But the song that immersed me, however, was “Deep End.”

With mossy green melancholic melodies, “Deep End” completely overtook me the first time I listened to it, and it left a burgundy bruise on my heart that I don’t think will ever heal. It doesn’t take much for a lyric from a song to hit me particularly hard or for a bass lick to scratch a perpetual itch in my brain, so it wasn’t a shock that I was instantly struck by the first ten seconds of the song.

My all-time favorite night-time artist, Phoebe Bridgers, is masterful at the art of gloomy guitars and murky melodies—and Humberstone is right in line with that craft. What entranced me at first, and still does at the probably 100th listen by now, was the guitar. Like stepping into Humberstone’s personal night, her personal sitting-down-in-the-shower moment, “Deep End” is the epitome of the sun setting at 4 in the afternoon. And I love it.

“Vanilla” picks up the pace after the gloriously depressing “Deep End,” and it, yet again, defies all standards of any genre. Probably the most upbeat song of the EP, “Vanilla” begins with buoyant techno-drum beats, acting as the slow buildup to the chorus I’ve screamed a few times too many in my car. “Vanilla” is made for driving fast and screaming loud, and the contrast between “Deep End” and this song is a testament to Humberstone’s versatility as an artist.

It wouldn’t be an end to an EP without a ballad, especially if it began with one, and “Livewire” circles back to the dark tones of “Deep End” so perfectly. Swapping piano for guitar, “Livewire” opens with mournful chords and Humberstone’s ethereal voice remarking, “I’m getting older / you’re getting older / never in touch; we gave up on that, recently.”

Yet another song full of tattoo-able lyrics, “Livewire” depicts messy ebbs and flows with another person, and the definition of the word literally means “an energetic and unpredictable person.” Life, in its essence, is a livewire, and Humberstone really encapsulates that feeling and those themes in this song, and throughout the entire EP.

Falling Asleep At The Wheel is a masterpiece, one that I predict will have some permanence on my body in the form of tattoos in the foreseeable future. Breakout artist Holly Humberstone poured her heart and soul into her first endeavor, and she has made her mark on me and many others who also have an unhealthy obsession with Phoebe Bridgers and Maggie Rogers.