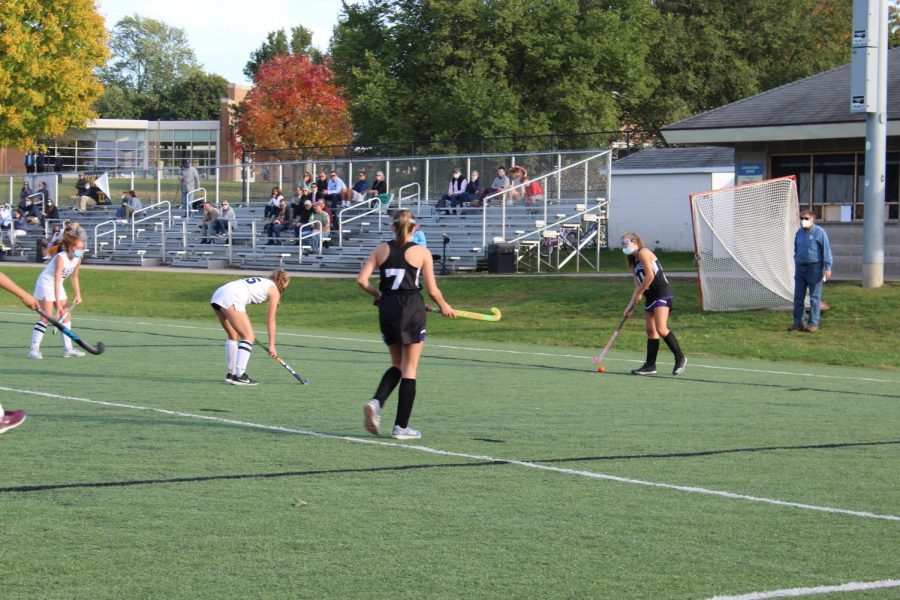 After a 3-8-2 season in 2019, the girls looked to bounce back in the 2020 season. The team was particularly young, with one returning senior: FHE Amber DeJonge. Another “rebuilding season” did not phase the team as they came in with a championship mentality before the season.

Not only did they have to deal with their highly competitive schedule, but the girls were also hit with their first taste of adversity as the coronavirus became a big factor in their season. It canceled a few of their games and forced them to wear masks throughout the season. The team also implemented a new offensive scheme in the circle. They had a limited amount of time to learn and perform this new offense, and as a result, the girls struggled on the offensive side at times during the season. As the season progressed, the girls got more comfortable with the new scheme and it translated on the field with the girls scoring more goals.

“This season, our team learned how to play a completely different system,” head coach Andrea Shaner said. “From our first game, to our last, it was incredible to see the difference in play. As a team we were moving down the field a lot better and getting the ball where it needed to be.”

The team started off the season with a tough 8-0 loss against Dexter. In their first home game, they struggled offensively with their new system which put pressure on the defense the whole game. FHN sophomore Brooke Toigo had a great performance in this game showing exceptional effort and hustle. The girls went on to win their next game 8-0 vs Rockford; an all around great performance by the team with their offense exploding for 8 goals.

A few weeks after the Rockford win, the girls took on Novi at home. It was senior day, which made this game bigger for solo senior Amber DeJonge. She brought heart and motivation to the game and it showed. Forest Hills looked like a totally different team winning the loose balls, playing fast and aggressive, and making saves. Freshman goalie Alayna Gshwind had a few pivotal saves which kept the girls alive. Another key player was FHC junior Sophie Hartl. She made a handful of key defensive plays and won most of the loose ball battles. The game ended in a 2-2 tie after many chances at the end to seal the deal for Forest Hills who came up just short. A very unconventional ending to Amber’s last home game.

After the tie, the girls traveled to East Grand Rapids to take on the Pioneers. A bitter rivalry would show to be a defensive battle. The loose ball battle was so vital in a game where the last possession would matter. Down 1-0 most of the game, the girls fought hard on both sides of the ball. One of those players was WMAA freshmen Maddie Shaner. Her aggressiveness and determination kept them in the game. Unfortunately for the girls, they fell to the Pioneers 1-0.

Moving on towards the end of the season, the girls faced Ann Arbor Pioneer in their playoff game. They lost to the Pioneers in the last game of the regular season 7-2; the team was focused on revenge and a win for the playoff rematch. A solid start saw the girls confident and motivated going into the second quarter. Although they had a positive start, they were on their heels for most of the 2nd quarter and found themselves down  6-0 at halftime. The team had nothing to lose in the 2nd half and played with the most effort they have played with all season. While the team lost 7-2, they saw this as a huge boost heading into their next season. FHC junior Julia Brown gave it her all, scoring a goal and was a pest on the defensive side of the field.

“As the season progressed, we tightened up our defense and learned how to transition the ball through the neutral zone more efficiently,” FHC sophomore Shannon Murphy said.

Although the girls struggled defensively in parts of the season, they relied heavily on the defense in the last few games of their season. In some instances, it won or tied games.

“One thing we can work on going into next season is just working on the basics and stick skills,” FHC junior Sophie Hartl said. “We also have to work on our strategies against different styled teams.”

Despite some season struggles and a 2-6-2 record, the team plans for the future. With a player departing, Forest Hills looks to have one of their best teams ever. Key players such as Brooke Toigo, Shannon Murphy, and Maddie Shaner all return and look to have a greater impact in the future of Forest Hills field hockey.