Hubie Halloween was a Different Type of Horror Movie 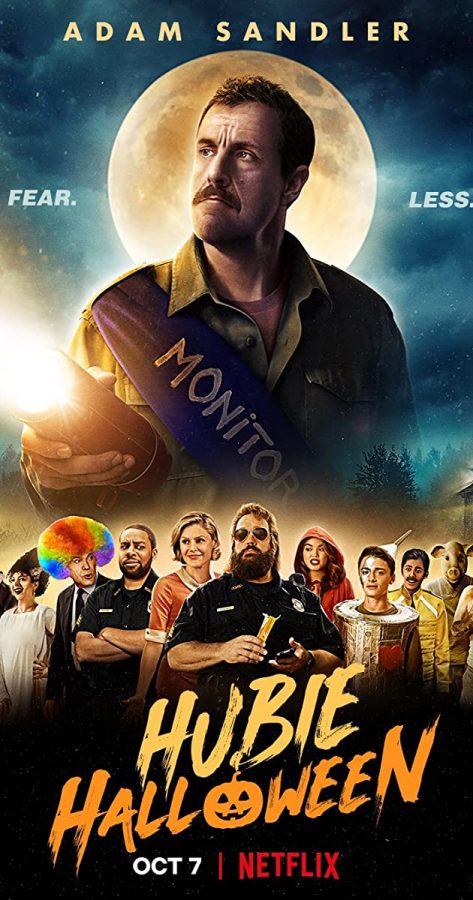 This is a movie poster of Hubie Halloween

Halloween isn’t an ordinary day for people in Salem, Massachusetts, and the movie Hubie Halloween portrayed this in the worst way possible.

With Adam Sandler as the main character, along with other great actors like Noah Schnapp, Peyton List, and Karan Brar, the cast list for this movie was the first thing that piqued my interest. I expected this movie to be possibly one of the greatest. But while it has a great cast list, the movie was excessively strange.

Unfortunately, my expectations were disproved in the first 10 minutes.

The movie starts with Hubie (Adam Sandler) as a town outcast. Hubie’s motive is to protect the town and ensure safety, although there are many factors that prevent him from achieving his goal. As I watched, I could feel my face twisting into a phase of confusion and disgust. Throughout the movie, the events in Salem were adding to the suspense of “Who’s kidnapping these people?” I struggled to watch even the first 30 minutes of it, as it made me recoil with a chill down my spine. The acting seemed overly dramatic and made the movie feel excruciatingly long.

The opening scene starts at a mental illness hospital where it is discovered that a patient has broken out. From the beginning dialogue, I could tell this movie was not as I anticipated. The whole town perceives Hubie as a less intelligent citizen because of his mental disability, but countless times it is shown how smart he really is. I dislike the cliche idea of mentally disabled people being seen as lesser than someone without a disability, but the outcome of Hubie becoming a great mayor proved that everyone can be seen as equals.

In one scene with Hubie, I couldn’t stop the repulse crawling out of my skin as the shot showed him catching eggs in his special flask and puking them out later. Each scene was different from the next and didn’t tie together what had happened. Instead of this being a great suspense tactic, it left me confused and annoyed.

Towards the closure of the movie, it jumped from the event of Hubie being ridiculed in the town to becoming a respected mayor in a blink of an eye. Along with that, a new relationship sprung out in the last 3 minutes of the movie. It was too rushed, and I even had to rewind at least 5 minutes to make sure I didn’t miss a key detail.

This movie is a whirlwind of emotions, and I don’t think I could stand to watch it again. The storyline of being your true self even when others shame you is a total Hallmark movie plot that I felt was too kid-like to be considered a great family movie.