Veterans Day is celebrated in a variety of ways 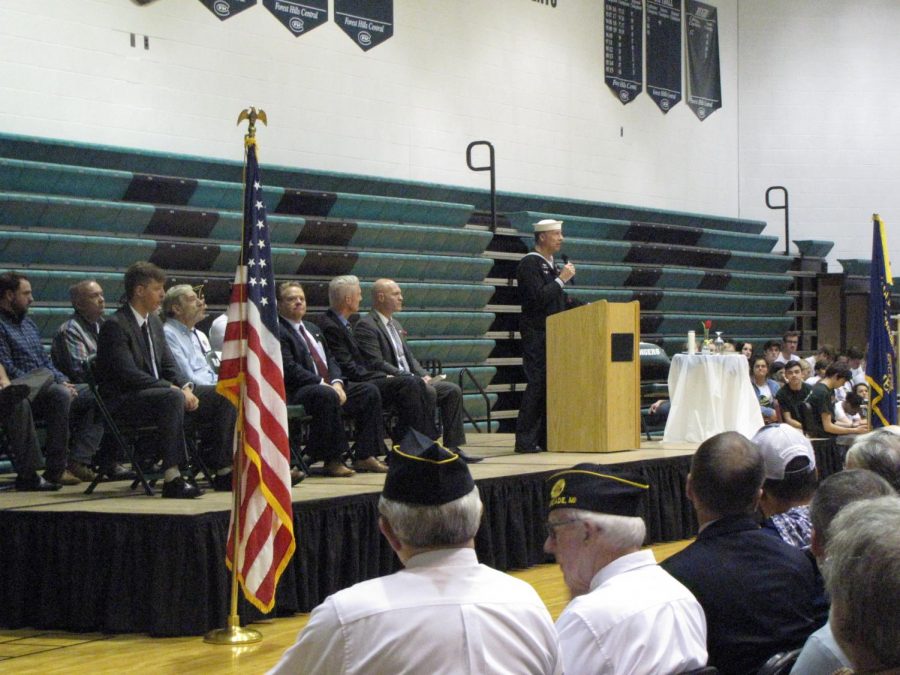 A picture of the Veterans Day assembly from last year.

Vietnam Veteran and Forest Hills graduate Bob Buys once had Christmas at the Admiral’s house in Bermuda.

Buys was an enlisted man, and he didn’t have enough leaves to go home for Christmas, so he stayed where he was, went to church, and got invited to a wonderful feast with jealous superiors looking on.

Before Buys could make it to this wonderful feast, he had to join the military. Buys joined the Navy during the Vietnam War in 1970 and fought until 1974. In his four years, he traveled the world by plane; his squadron—or team—searched for Russian submarines. His job was to help take care of all things electric on the plane. Because of the job his squadron had, he was never in combat–he played more of “a support role.”

In his four years of military experience, Buys learned to appreciate the freedoms he has as an American.

“Enjoy the freedoms that we have today,” Buys said, “but realize that that freedom came at a cost. People died. People gave up, well, I gave up, four years of my life [that] would have been my college years, to serve my country. There was a war going on, so I felt it was my duty to serve. A small sacrifice [on] my part, but, you know, I didn’t come back missing a limb, or with post traumatic stress disorder, or anything like that, so I feel very fortunate. And these guys that served in Iraq and Afghanistan, who did three, four, five and six tours, [it] mentally and physically took a terrible toll on those people, and I have a lot of gratitude for what they did.”

Friedli was in the military just after Buys, from 1976 to 1995. He was a part of the United States Army in ordinance—the part of the army that deals with munitions. Over the twenty years he had many jobs, usually dealing with “procurement and acquisitions,” but he mainly stayed in America and Germany.

Due to when Buys turned 18, he didn’t have many choices when it came to the military, he would have to enlist himself, wait to be drafted, or run from the inevitable war. For Friedli, however, the draft had been done for four years. Friedli’s father was a World War II Veteran, but that wasn’t his main magnet towards the army, he felt he needed to do something for the good of the country.

In his time in the army, Friedli gained many things: a wife, a son, an unending knowledge of munitions, and advice for the next generation of soldiers.

“Always do your best in whatever assignment or mission you’re given,” Friedli said. “And if there is something that you don’t feel is right or correct then you need to speak up so your voice is heard. Always do your best, do it with honor, and distinction, and courage.”

With all these two, and the rest of the country’s Veterans, have done for maintaining the freedoms of America, it is only right that they have a holiday for themselves.

Veterans Day is celebrated on the 11th day of the 11th month at the 11th hour. It was originally called Armistice Day and was first celebrated in 1919 to commemorate the end of World War I. In 1954, a law changed it to honor all Veterans and it brought the holiday known today.

Similarly, Friedli usually celebrates it with going to the Veterans Day parade, going out to restaurants, and taking out flags from Veterans graves until the spring.

Not everyone celebrates Veterans day in the same way, however.

Daughter of Veteran Erik Pointer, senior Amelia Pointer, and her family don’t do much different than any other day for Veterans Day, but that doesn’t mean they don’t show their gratitude to him.

“We make sure all year long that he knows how thankful we are for his service, what he does for us, and the sacrifice he made for us and our family,” Amelia said.

With all of the gratitude given to Erik throughout the years, some inspiration was returned.

“[His stories of his time in the Navy] inspired me to be really diligent,” Amelia said. “If I put my mind to something, I can do it. Because the way he described it sounded so incredibly hard, I would be like, ‘ok, well if he can do that, something as difficult as that, then maybe I can do this.’ And keeping that mentality makes things a little easier; [it] puts things into perspective a little bit.”

With everything the Veterans have done for America—inspiring, fighting for freedoms, giving advice—Veterans Day is important so it can be shown to them what they mean to the people.

And Veterans Day doesn’t go unnoticed by the Veterans.

“[Veterans Day] makes me proud that I served,” Buys said. “I feel a great debt of gratitude for all of those guys and women who end up giving their lives and fighting for our freedom.”

Although he fought for the country too, Buys doesn’t hesitate to thank his fellow Veterans or the soldiers who never made it home.

Friedli has a similar outlook as Buys about Veterans Day.

“[Veterans Day] makes me proud that I served,” Freidli said, “and it’s a way of acknowledging that millions of people have served their country, whether they served directly in conflict or during conflicts, and it makes me proud to have done something that’s greater than myself, [something] that helps preserve the freedoms that we enjoy here in the United States of America.”