The Platform shoved me out of my comfort zone 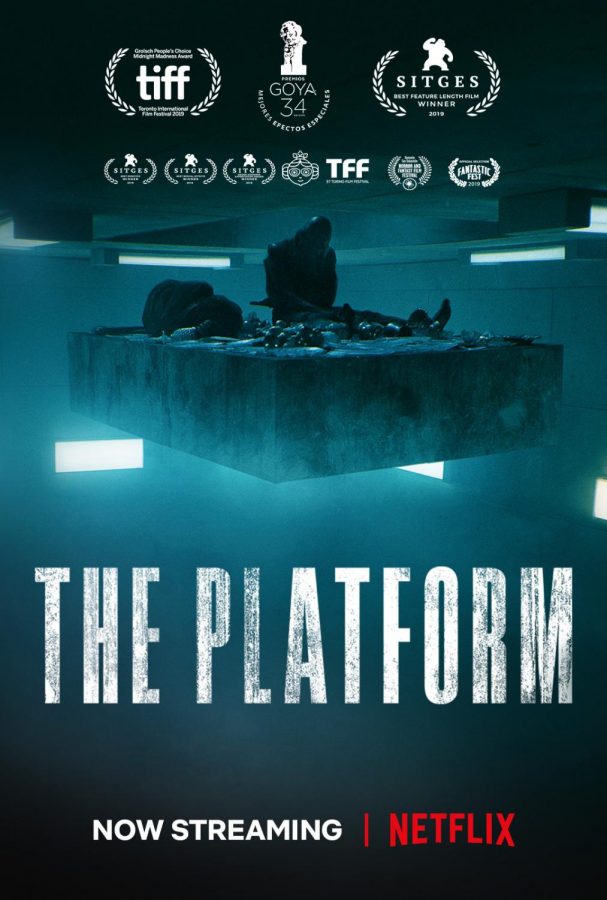 I don’t know why I chose to watch the movie The Platform. It’s a science-fiction movie that is extremely dark and deeply disturbing; it shows isolation, starvation, and scarcity of food.

This movie is something I wouldn’t have chosen on a typical day, but I was looking for something new. The movie contains murder, blood, gore, cannibalism, and significantly more.

The movie follows a group of prisoners who are in jail for crimes they have committed. The prisoners are assigned different floors to live on for the next month; the building is where they keep everyone.

The movie follows character Goreng who is portrayed by actor Ivá Massagué. Goreng agrees to participate in a science experiment for six months to receive a diploma. He didn’t exactly comprehend how extreme the next six months of his life would be.

Once Goreng wakes up on level 41 with his roommate Trimagasi (Zorion Eguileor), his roommate explains the system of the different floors, levels, and the significance of what they mean. Trimagasi is Goreng’s friend until they get gassed and moved to another level. After that, Goreng wakes up to Trimagasi standing over him explaining how they are stuck on level 171 and that means that he’d have to take drastic steps to survive.

Through Goreng’s journey he lives with three different people, and they all are very different. For the floors, every 30 days the workers gas the inmates and move them to different floors, repeating that cycle every month.

The only way they’re able to receive food is through the platform; a solid stone slab fits perfectly between floors and levitates down each level to deliver it. The platform only comes twice per day, but the catch is, though, the platform only holds so much food. It moves down level by level giving the inmates only a few seconds to eat as much as they can, leaving the level below them the scraps that they didn’t eat. The lower the floor number the better.

Goreng quickly learns that they aren’t able to take any food off of the platform or else the people in charge of the building will make their floor freezing cold or scorching hot.

After the first 30 days, Goreng finds himself  on floor 171 completely tied up with Trimagasi standing over him talking about what will happen next. Throughout this scene I wanted to cover my eyes hoping to not see anything that would haunt me for the next few days, but at the same time, I was wanting to watch the action-filled scene. I resisted covering my eyes to go out of my comfort zone, though. I somewhat regret watching; however, I enjoyed being able to see how amazing the actors made the scene with their incredible acting.

The ending of the movie is somewhat controversial with what it stands for. Some like to view it as a metaphor for capitalism, and how if everyone worked together, we could rise above and help those who aren’t able to have as much as the top levels can. I personally agree with that viewpoint, which is shown by the floor assignments. The lower floors live like kings with copious amounts of food, while the higher numbers struggle to live through the 30 days.

This movie is very fast-paced, and if you stop paying attention for just one minute, you can miss an extremely important scene. That can alter the plot line of the movie for good or bad. Although it moves fast, I still enjoyed the movie.

After watching this movie, I was up for countless nights, but regardless it was excellent; the movie included incredible acting. Massagué made it so realistic; it was as if I was there with him feeling all of his emotions, listening to all of his conversations, and even talking to all the same people.