To sophomore Lucy McLean, the best part about skiing is her team and the friends she made on it 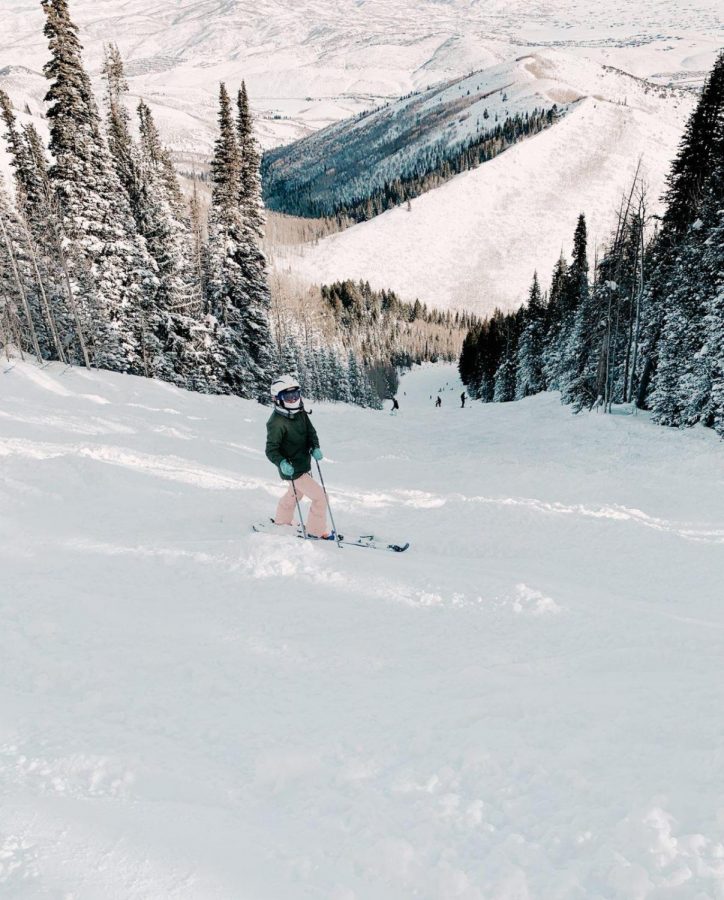 Sophomore Lucy McLean found herself precariously dangling from a halted chair lift. She and her family were on a ski trip in Colorado, but it didn’t quite go as planned.

Lucy treasures her ski trips despite the occasional risks of it. This was just one time that Lucy, her parents, and her younger brother Grant have ventured on a skip trip. During the winter, Lucy goes on many of them with her family—typically to Colorado or Utah. However daunting skiing risks can get, Lucy pushes on. She has been skiing since she was five years old and has “always loved it.”

Throughout all of her years, Lucy has stuck with skiing so far. She has tried out many other sports, including softball—which she quit last year—and cross country. However, neither of these stuck with her, and she felt she wasn’t that good at cross country. On the other hand, it doesn’t seem to bother her that she’s not among the best of skiers either.

“I’ve done a lot of sports over the years,” Lucy said, “but none of them have stuck with me as much as [skiing]. I think [I will continue skiing] because I’m not great at it—which doesn’t help—but I love the team that I do it with. And I’ve always liked the people that I do it with, even if it wasn’t this team.”

Lucy’s team is why she sticks with skiing; that’s why, not surprisingly, she cherishes her team and skiing more than other winter sports.

“I haven’t tried snowboarding,” Lucy said. “I want to try snowboarding, but also I think it would be annoying to me because taking [the snowboard] on and off and all that once you get on the chair lifts [would be frustrating]. And I feel like I would be horrible at tricks, and I think that’s why you snowboard. I definitely [would] like skiing—if I tried snowboarding—more.”

Lucy finds skiing more enjoyable than a lot of other activities. Though, to her, it is not about racing the fastest or being the best at skiing, but instead about having fun with friends—and her parents agree.

“My parents have always said that their favorite memories were when they went with all their friends to ski trips—even if it was just local,” Lucy said, “and I feel like that’d be very fun because most of my friends, as of right now, ski.”

Because she enjoys being on a team to have fun rather than compete, Lucy doesn’t plan to continue competitively at the college level, but she does look forward to continuing to ski for fun with her friends.

“I don’t think I’m good enough [to make a college ski team],” Lucy said. “I think if I went to a school that had a ski club that was just for fun, I might [join it]. But I don’t think I would ever even be able to get on a ski team in college.”

Lucy’s love for skiing also comes from the experiences of skiing itself that other activities just can’t match. The feeling of going down the slope with the beautiful landscape whirling past her is something Lucy can experience nowhere else.

“[When skiing], you have so much stuff on you, except for right here,” said Lucy, pointing to her mouth, “so right by your mouth, you just feel wind coming on you, but it’s a cool feeling, especially when you go up north or out west [because] it’s so cold. And it’s so pretty. No other sport has that where you’re [somewhere pleasing.] When you’re playing soccer, you’re on a soccer field, but if you’re skiing, you’re on a mountain, up really high. And it’s so pretty.”

The breathtaking view is not the only thing drawing Lucy to skiing. She has found a friendly, supportive group in FHC’s ski team. In fact, they’re her favorite part about skiing.

“[The others on the ski team are] all super nice,” Lucy said. “I’ve been on a lot of teams with all nice people. But this on one, they’re all easy to talk to, and the coaches are really nice too.”

Lucy finds that skiing with the team provides an opportunity to pass time with a nice, fun group. After practice, they typically eat dinner together at a restaurant, something Lucy looks forward to doing more this year now that she can drive. Above all, she likes the relaxed and social atmosphere skiing provides.

“I feel like it’s not as much of a competitive sport as most of these [other sports],” Lucy said. “It can be if you take it that way, but I kind of think of it as you spend almost as much time skiing as you do going up the chair lift, talking to people. So I feel like it’s more of a social sport, and it’s just fun hanging out with friends, and I’ve met a lot of people through it. I didn’t even know anybody going in, except one of my friends. Then I went in, and I met them all. And I love them.”