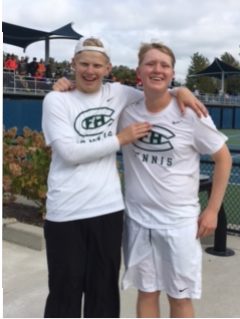 The two doubles team of Aidan Rynbrandt and Jack Ziegler did all they could in the Rangers’ state championship push Saturday at Hope College. The pair flew through the two doubles bracket en route to an emotional championship victory. Their first two rounds, against Grosse Pointe North and Wyandotte Roosevelt, were won with ease. In the semi-final, they faced off against an athletic duo from East Lansing and won a hard fought three set battle.

“To start the match they came out fast and took the first set,” said Aidan, who won states at two doubles for the second straight year. “We collected ourselves and were able to play much better in the second set. To start the third set, we got an early lead and never let go.”

After the tough semi final, Aidan and Jack met up with Midland Dow in the final. Jack knew that winning at three doubles last year would prepare him for another finals match this year.

“It definitely helped because I didn’t have any of the nerves once I got to the finals,” Jack said. “I knew that I had already been there and that even though it’s the state finals, it’s just another match.”

Aidan thought highly of the crowd and the atmosphere during the final.

“It was unreal,” Aidan said. “I’ve never played in an environment like that before. The crowd was going nuts after every point.”

Both Aidan and Jack know going back-to-back is something not a lot of people are able to do. They believe the championships will only bring more momentum going into next year.

Aidan is using the two-peat as motivation for next year as he will go for another championship.

“It feels incredible,” Aidan said. “It also makes me want a third one even more.”

There was only one other flight to advance to the finals, and that was the three doubles pair of Peyton Herbert and Mike Battiste. They fell short along with the rest of the FHC team, as Midland Dow was dominant all weekend. Dow, who is known as a tennis powerhouse, was able to bring home the state championship. For the Rangers, second place is still a success. Over the past four years, they have placed either first or second. According to Aidan and Jack, the string of success says a lot about the program and coaching.

“It shows that the program is extremely consistent and we aren’t carried by one or two performances,” Aidan said. “Everyone contributes to the great winning culture.”

Jack had similar thoughts on the overall success of the program.

“It speaks a lot about our program that we have been either first or second over the past four years. Our coach, Dan Bolhouse, has the attitude that we are going to compete with the best of the best. He schedules the toughest competition and he knows that it will help us win.”

As for sending the seniors out with the runner-up trophy, the pair has mixed emotions.

“It was a little bit bittersweet,” Aidan said. “We wanted to send them off with a team title, but the runner-up finish was still pretty good. I know that our whole team was playing every match for those five seniors.”

Jack had a similar outlook and was glad to send the seniors off on a positive note.

“It feels great to send the seniors off with second place at states,” Jack said. “We obviously wish that we could’ve gotten first. For the kids who have been on the team for three or more years, they can say they won two state championships and one runner-up. That’s pretty cool.”