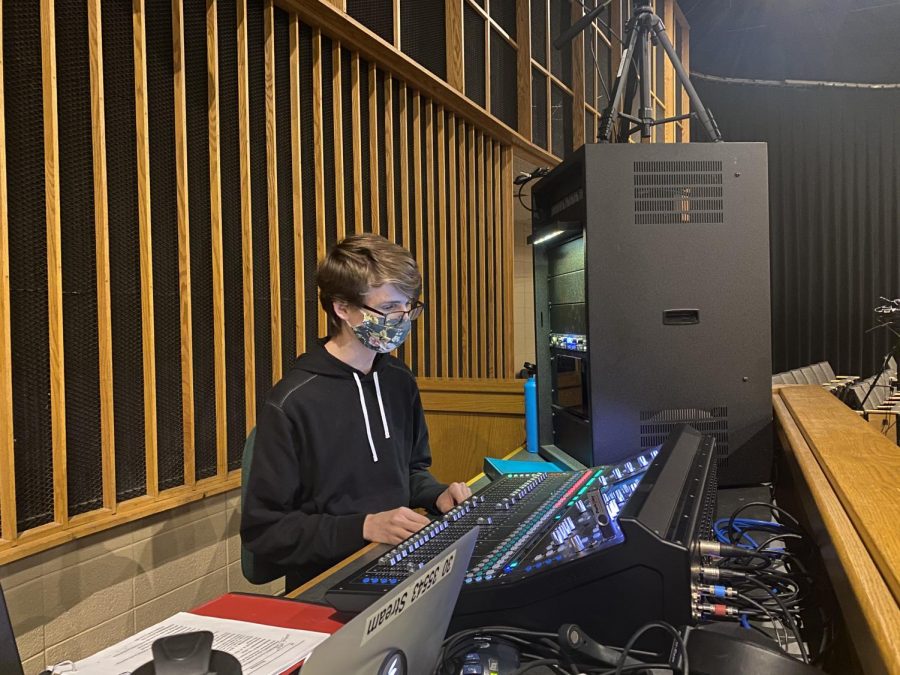 Junior Thomas Smith has a peculiar fascination with learning. The idea of absorbing new information has always seemed appealing to him. Though school fulfills this ambition, Thomas loves to find other ways to learn as well.

Thomas’ favorite way to learn is actually quite common among many students: through the art of reading.

Even though history is a subject that students learn about in school, Thomas continues to find himself reading about it daily. His love for reading has given him the opportunity to see the world from a different perspective.

“I love to learn, and reading is a good medium,” Thomas said. “It also takes you away from the here and the now and puts you somewhere else, in someone else’s mind. I enjoy that feeling of getting away for a bit.”

The secrets hidden between the lines of each book picked off of a shelf create the ideal break for many people; however, the break that Thomas finds in reading is one that can be found in theatre as well.

Joining theatre his freshman year, Thomas has created a life for himself in the school’s auditorium. As an auditorium technical aid at the school, Thomas spends countless hours surrounded by lightboards, soundboards, and microphones.

“I’m the head of tech, so I do mics, sound, lights, and all of that stuff,” Thomas said. “I don’t have much authority in the theatre, but I definitely have the final say when it comes down to anything related to mics, sound, and tech.”

However, Thomas had to put in a great deal of effort to become the head of tech.

Thomas has not only taken time out of his life outside of school to be involved in theatre, but he has given up one hour in his school schedule in order to prioritize his position in the auditorium. During Thomas’ fourth hour, he sits in the back of theatre director and English teacher Robbin DeMeester’s classroom.

“Even during theatre’s off-season, I help DeMeester with stuff anyway,” Thomas said. “DeMeester will be teaching her English lessons to the freshmen, and I’ll be in the back working on various schoolwork [assignments], math, and programs. Occasionally, if there is theatre stuff, I’ll be gathering projections or sound files for her.”

Thomas’ expertise in the world of technology made him the ideal candidate for the position he currently holds. His dedication to the theatre program only shows how much he deserves that position.

However, Thomas had a slight advantage in bonding with DeMeester.

Thomas is one of few students to attend the same school that their parent teaches at. Thomas’ dad, AP Computer Science teacher Joseph Smith, has given him connections in the school that other students do not necessarily have access to.

“DeMeester knew my dad,” Thomas said. “He wanted me to get involved in something in high school, so theatre just seemed like a good choice.”

However, it shifted from being a good choice to providing Thomas with a group of people he can rely on. The people involved in the theatre program have given him a reason to push through the anxiety he may face during show weeks.

“During show weeks, I am incredibly nervous,” Thomas said. “A lot rides on [the] sound being good and people being able to be heard. So, I’m nervous throughout school [and] during rehearsals, but I’m also really excited. I enjoy working with these people. I enjoy seeing all of these people. I enjoy the actors, the crew, [and] all of the adults that help. It’s a big mix between being nervous and really, really excited.”

These people that Thomas looks forward to spending time with have helped to mold him into the person he is today.

Thomas has changed quite a bit since his freshman year because of theatre. The change happened slowly in his eyes, but to others, he is nowhere near the person he was a couple of years ago.

“I feel like I am more outgoing, personally,” Thomas said. “You are pretty much forced to interact with, talk to, and work with people in the theatre. You can’t just sit in the back and do absolutely nothing; that’s not acceptable.”

His constant interactions with the cast, crew, and directing team have provided Thomas with the perfect excuse to get to know everyone involved in a production. It has helped him take on some leadership qualities in his role and made him “more willing to take a chance.”

Theatre has not only helped him become a more outgoing person, but it has taught him a myriad of lessons he can use outside of the auditorium as well.

“Teamwork is very, very important,” Thomas said. “ Just listen. Listen to people, especially those that know better than you. It’s not necessarily telling people what to do but rather being able to listen and formulate ideas as to what’s going on and what can be done to improve. Everybody’s contributions matter no matter how little they seem.”