Dear Candace Owens, this is not about you 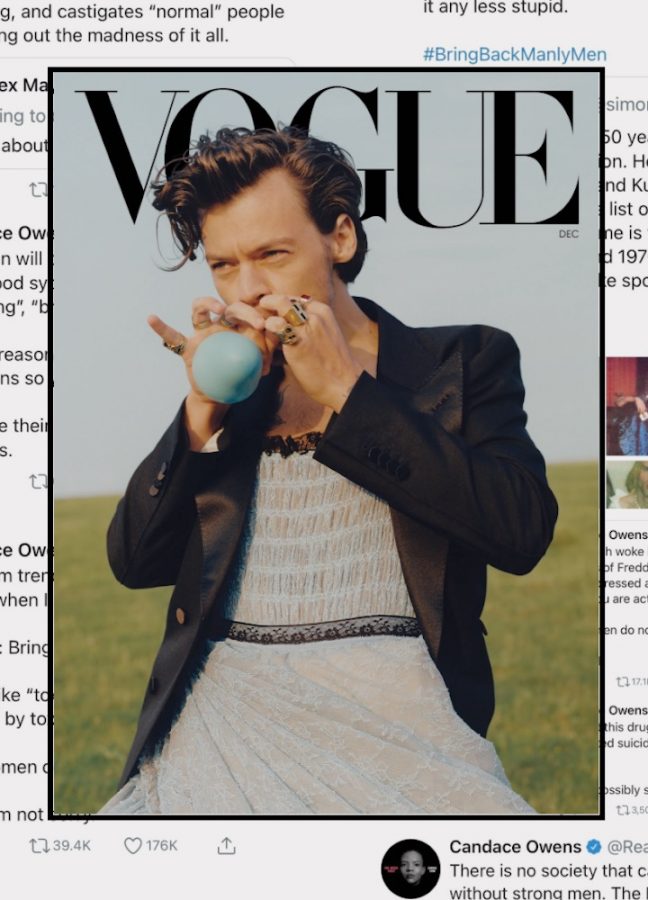 The first solo male cover in the 108-year history of Vogue magazine.

Just last Friday, with the announcement of the December issue, Harry Styles was devoted the above title, taking his place front and center in this groundbreaking release. Styles—who has been authentically himself since his independent career began—danced about Stonehenge adorned in lace dresses and tweed suits, giving the world what we have come to expect from him: utter confidence.

However, it would not be a public appearance for Styles if it were not for the immediate denigration levied by more conservative thinkers. Not even twenty-four hours after Styles posted about the shoot, conservative author and political activist Candace Owens took to Twitter to advise that “the steady feminization of our men” was, as she put it, “an outright attack.”

Sealing her controversial tweet with the phrase “bring back manly men,” Owens spent the rest of the weekend responding to fans of Styles’ who were justifiably outraged at these insensitive comments. Twitter patrons quickly disproved her inaccurate statements on Eastern and Western culture and debunked her standpoints on toxic masculinity.

In a tweet from Tuesday, Owens called out the “woke idiots” who sent her pictures of Kurt Cobain and Freddy Mercury by saying, “Stable men do not wear ball gowns.” On Wednesday, she ludicrously fired back again, this time on the steps Hollywood takes to enable and glorify mental illness, all the while still calling for a renewal of “masculinity” in our society.

The lives of artists like Cobain, Mercury, David Bowie, and Prince were riddled with unwelcome circumstances. However, none of the trials thrown their direction were inflicted by the way they dressed. When looking at photos of these musicians adorned in this attire, it is blatantly apparent how comfortable they feel in their own skin; they are just as happy in dresses as they are in other clothing. This sort of confidence does not hold a label and is undoubtedly not gendered, and Owens ridiculing those who search for it is spiteful and almost begrudging.

Furthermore, “Hollywood sycophants” supposedly enabling their idols through characterizations such as “stunning” and “brave”—all words Owens used in her attack— is not permissive; it is supportive. Musicians like those Owens listed were brought into the world of fame quickly, falling into addictions to their time’s popular vices. For individuals both in and out of the public gaze, it is painfully intimidating yet imperative to share struggles, something these performers did through their craft. During an argument about gender, specifically about dated “masculine” and “feminine” gender roles, there is no place for negative commentary on drug addiction or suicide. Owens imposing these matters was similar to many past actions taken by her party and, while expected, was unacceptable.

Another hole in Owens’ logic came to blows when she posted an Instagram video on Wednesday rehashing everything she has said thus far. Many men have come forward to defend Styles, sending Owens pictures of them in dresses to prove that “masculinity” and “femininity” are just antiquated concepts. Throughout her onslaught of personal aggressions against these men, she nevertheless extended a half-hearted olive branch by stating, “Nobody has sat here and said if you’re a man in a dress, something bad should happen to you.”

Though this testimony would usually be considered amiable, it was sandwiched between even more crass criticisms. At one point in her video, she came out calling men in dresses “crackheads,” insinuating that “if you live on the streets and you see a man wearing a dress, you assume they have mental issues.” Seconds after this, she delved into perversion, claiming that she would never let her children interact with a man trimmed in this garb.

Candace Owens, it does not matter if you do not intend to harm a person physically; emotional and material pain are two sides of the same coin. Trying to bring back “manly men” is just you searching for new things that make you uncomfortable and attempting to snuff them out. You say that Hollywood enables poor influences yet you head over to your verified Instagram and 2.9 million-person platform to spew your phobic and primordial ideals. When speaking about Styles, you cannot claim to “like his music,” or say that he “seems like a nice enough kid,” and then turn around and call his actions perverted and wrong. It is ingenuine, only partially loyal, and specious.

And most importantly, it is none of your business how another person dresses.