Josie Butler’s consolation is found in music and songwriting 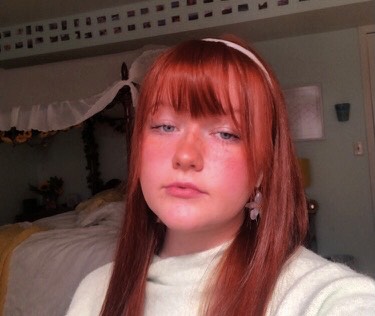 Inspired by her own mother’s voice constantly weaving in and out of the walls of their home, freshman Josie Butler’s love for singing and songwriting began at the ripe age of seven.

“I sing a lot and write a lot of songs,” Josie said. “I started playing piano when I was in second grade, and my mom always sang when I was younger, and she played guitar too, so I guess that’s kind of what got me started, and my aunts and my mom’s side of the family would sing all the time, too.”

For Josie, singing is a major part of her life as she is involved with the choir program through the school. She also has a YouTube channel that she puts her written songs on, but has not posted anything lately. Josie is getting more and more interested in producing her songs as time goes on.

Josie has another talent that connects her to singing: playing the ukulele.

“I’ve done a few covers,” Josie said. “The first song I played on the ukulele was ‘Riptide’ by Vance Joy.”

She occasionally sings while playing the ukulele, but tends to sing alone rather than playing an instrument. Throughout her journey of singing and songwriting, Josie has discovered a specific genre she likes.

“I like more Indie, but Indie-pop is more my type,” Josie said. “I like the lyrics of [Indie music], but that’s why it varies so much for me within genres because, for me, it’s all in the lyrics more than the melody.”

Josie tends to focus more on the song lyrics than the melody itself, meaning that she has more of a focal point on the meaning behind each song. Josie also includes this within her own songs by being able to vocalize how she feels about a certain situation in life or hardships she may be experiencing.

Throughout it all, Josie has the constant support from her family, sending lyrics to her dad, for example, who assists with the lyricism and often gives her ideas. These lyrics in the songs Josie writes are special to her because they link with her in a personal way: she has a soft spot for writing songs about how she feels.

“It is definitely an outlet for me to get things out,” Josie said “I get anxious a lot. So [for me], it’s just a really fun way to put it into art.”

Not only has songwriting and singing been a stress-reliever for Josie, but it has overall helped her grow as a person—even in the face of adversity. Although in the current circumstances, there are often struggles that Josie faces.

“I’ve had some writer’s block [recently],” Josie said, “because there’s not much going on right now.”

However, she does not let this get in the way of her future goals, and she still pushes herself to be better. Josie makes an effort to sing for about two hours every day and watches videos of vocalists to help her polish up on her vocals. She is now starting to perceive how she wants to sound as a creator, which she finds captivating, and finds peace in the gift she has of singing and songwriting.

As Josie glances into the future, envisioning where this music journey may take her, she does not fret about what path she will become victorious on; singer or songwriter, Josie is content and blossoming every day.