I Took A Walk… 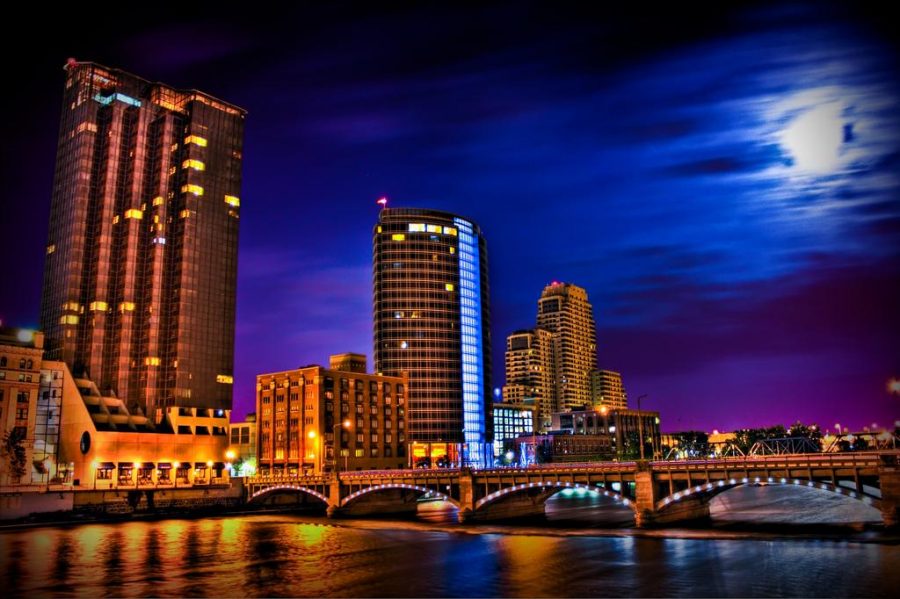 There’s a certain mood that arouses the air in the heart of downtown Grand Rapids’ nightlife.  Perhaps it’s the blocks of light produced from buildings or the polished luster of the black pavement hitting the ground.  Maybe it’s the misty, still air of Michigan’s chilly autumn nights.  Perhaps it’s the electric energy from people joyfully gathered to celebrate a lively event.  This downtown can be such a mysterious place.  When the sun comes to the conclusion of its day and darkness hovers, the light of the city remains.

My walk began on the west side of the pedestrian bridge crossing the Grand River. I pulled my phone out of my warm pockets to check the time – 8:42 p.m.  I pondered what I could do with the rest of my evening.  I looked upward.   I was in nearly perfect position to view the downtown cityscape.  The lights from the buildings which overlook the river danced on the water, creating a visual illusion of a  performance stage.  As I continued my walk on the pavement, I remember thinking it was such a pretty image.  Small lights outlined surrounding bridges in a pattern that looked like Santa’s sleigh.  Sounds of conversation whispered through the air, but the tone from the river flowing beneath me overrode all other sounds.  I then crossed the bridge.

Could it be the sound of horse hooves?

I looked in front of me and the saw the shadow of a tall, masculine police horse.  He stood proud and honorable as he greeted citizens of the city. I went to pet him after receiving an approving nod from the mounted officer.  His coat was getting heavy and dense in preparation  for the soon-to-come winter months.  His  glossy eyes also reflected the city lights.  I thanked the officer and continued onward.

I felt a wave of warm air as I rushed through the tall, royal-like glass door.  The sweet smell of roses and chocolate filled the air.  I was inside the Amway Grand Plaza Hotel.  It had an eccentric feeling, one that felt like walking into a different era.  I looked over my shoulder toward the sounds of laughter.  There, in an extravagant ballroom, men dressed in their finest evening suits and women wore sequined finery.

I heard the sounds of wine glasses clinking together in a toast of celebration.  I imagined the room filled with persons of wealth and success.

My journey continued on to Monroe Avenue.  Couples flooded the sidewalks holding hands, hurrying to a performance at the Devos Performance Hall.  It was nearly 9:00 p.m.  I walked to the nearest crosswalk.  The sound of accordion music fluttered in the air, but I was unsure which direction the rhythmic sound was coming from.  I walked farther south and noticed a small gathering of people obviously delighted with the man playing the odd, unfamiliar instrument.  Many bent down and offered dollar bills to the musician.

I walked through a crosswalk and continued on down Monroe Avenue.

There was a small band playing for a substantial crowd that had gathered at Rosa Park Circle.  People were snapping pictures with their phones all the while smiling and feeling fanciful in the midst of the street performers.

I walked farther down the street and noticed a group of college-aged boys bouncing up and down.  I had a hard time making out the movements until I was a couple yards away from them.

I heard a catchy, rhythmic beat travel through the air.  It was the sound of rap music, and as I moved closer, four boys were freestyling to the song.  Crowds from every direction gathered to watch..  I must say I was impressed, too. The energy was incredible, and the way they engaged with their audience was fascinating.

It was fun to be a part of a group of strangers all gathered in support of street entertainers eager for approval.

I decided to turn around, but something caught my attention.  I noticed a man dressed in thin clothing and shoes not appropriate for the weather.  He had a small dog with him on a leash.  He had a piece of food in his hand, but instead of eating it himself, he gave it to the dog.  I was struck by what I assumed to be his selfless act.

I looked at my phone when I reached the parking garage – 9:45 p.m.  It was time to leave for home. As I drove off, the towering lights of downtown vanished from my rearview mirror. I learned something that night: it does not have to be daytime for there to be light.  It  can be found all around us in mysterious ways created by people, scenery, and activity.  When the lights turn off at night, the world becomes lively, and that may just be the coolest thing ever.