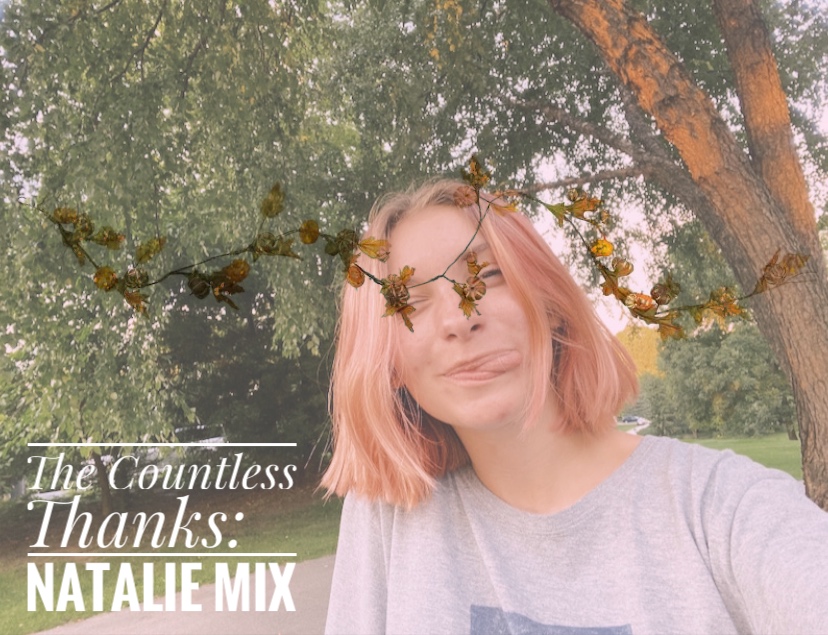 TCT’s The Countless Thanks: Natalie Mix

Jessie – for letting me stay longer than I should’ve

I’ve already thanked you for months of quarantine that would have unmanageably lonely and mundane without you—for the all-nighters, hours of Animal Crossing, new Zoom names every night—ahem, Mrs. Cletus CleCletus—chai tea, and every priceless moment I can’t currently recall.

But now I have to thank you for everything else. For boba tea trips, for slushies after Amazing Race, for joining TCT, for every word that you write that I would keep reading till the end of time, for chanting “AP Lang!” as we walk there from Geology, for sending me TikToks that hit the mark every single time, for The Women Wall, for watching Knives Out too many times, for that one exclusive German club game, for tarot cards and astrology and trips to Barnes and Noble. And, most importantly, for always letting me stay. When we sat and talked in the car for way too long—past my curfew—with our late night slushies; when we sat in your kitchen after boba tea, and I didn’t want to leave; when I left your house with blue hair dye all over my hand and a world that was slowly crumbling. You always let me stay, longer than I should, but as long as I want, although I’d nearly always stay longer if I could. Thank you doesn’t quite sum it up, Jessie Warren.

Maddie Ostrowski and Brynn Schanski – for talking politics in ASL

I was understandably confused when the Zoom call cut Benji off in the middle of his sentence, but I was sufficiently happy when I realized I had been transferred into your breakout room. It was just another item on the list of ways you guys hadn’t even let me consider being alone. Every single day this year, you guys were a disproportionate part of the reason I looked forward to ASL all morning. And even when school was online, and I was feeling more than a bit lost, you guys made fourth hour better.

I can’t fathom a better way to have watched the election results roll in than with you guys over Zoom. And I can’t fathom a better lunchtime activity than discussing controversial politics with you guys while the whole ASL class listens in. So, when I think about going back to school, in-person, online, it doesn’t matter, and my anxiety ramps up a bit, I know you’ll both be waiting in fourth hour to make everything just a bit better.

Allie and Veronica – for allowing me to see myself in you

Do you remember when I aggressively declared that I wanted to be friends with all the freshmen in TCT? And mind-blowingly enough, I didn’t scare you guys away? I think about that regularly because it’s the seed that led to the flowering friendships I have with you lovelies now. I may be barely older than you both, but watching you guys blossom into now-sophomores, each carrying your own factions of this news site—it makes me ridiculously happy and proud.

Allie, with your bubbling rosy aura—I’ll never mind driving you around, especially now that your bright smile can’t greet me in class. I crave more afternoons spent thrifting and confusedly placing fast food orders, wrangling your dog into its cage, and talking about everything that weighs heavily on our minds while my questionable driving barely gets us to our destination.

Veronica, every day this year I knew I could depend on you being there in TCT, ready to share your wild ideas, ready to quietly tell me what might be bothering you, and always, always ready to listen to anybody who needed you there. You glow with your eccentrically on-point outfits, your willingness to jump on board with any possibly inadvisable idea, and your knack for coming up with these ideas—like your brilliant TCT outing plans.

I can’t wait for it, yet I already see you guys leading a new generation of TCT someday.

Dr. Keller – for the tough love

You told me on one of the first days of school that you could tell I was a writer; I took the compliment very highly. But sometimes, when people can tell I’m a writer, they don’t push me. They congratulate, and they praise me, but they don’t present me with much constructive criticism. I’d become complacent—that’s a Membean word! But you didn’t settle for that. You’ve challenged me to shape my writing around an idea, to stop repeating myself and lower the word count, to actually compound upon my vocabulary so I don’t need to reference the thesaurus tab of my computer so often. And beyond even that, you’ve inspired me: with your Ruth Bader Ginsburg mask, with political discussions in class and assignments that force us to think, with your—how many?—degrees. And most of all, you’ve accepted what I’m able to give but nothing less. Somehow, you’ve known when something is the best that I can manage, and you’ve taken it graciously, but you’ve also pushed for more. I can’t help but be exorbitantly grateful for your tough love that has made me want to be better.

Lynlee and Abby – for being my idols

This is late. As are so many of the stories I’ve turned in this year. But as things have slowly started to fall apart, you have both been there, understanding, refusing to let me see TCT as the only thing that matters. Sometimes it feels that way, as Abby said, because it’s such an important part of all our orbits. But you guys have shone the light on me amongst all the articles I didn’t get interviews in time for and all the short stories or poems that weren’t meant to be that at all. And I nearly breakdown thinking that you’ll both be gone next year—that you guys had your senior years ripped away and returned to you as a fading echo, that I had my last year with you guys there to comfort and guide suffer the same fate. It hurts every time that a new class of seniors leaves this room, leaving their mark as a plaque or a brick on the wall, but it will hurt the most when you guys leave. Because you’ve been here the longest. It doesn’t feel like TCT without you.

Yet, despite all that’s been lost and all that will never be the same, neither of you have given up. I could not do what you guys do; I wonder if I’ll ever get the chance. But it won’t matter; you did it first, and you did it best.

Lynlee, for every time that you’ve dyed my hair and the times that you tutored me in math and the way that your jokes leave me breathless and jaw-dropped. Abby, for being the one I thought to call when I couldn’t keep going because when you couldn’t keep going, you somehow did, but you didn’t hide it. And for being the calming presence that feels like a hug when hugs are now illegal.

I won’t cry writing this—although I nearly did—but rest assured that I’ll cry when you leave. And no matter where you both go, no matter what successes you find—because you will—know I’ll never stop going to you guys when I’m feeling more than a bit lost; I can’t thank you enough for helping me find my way.

And finally, to the people who showed me summer, happiness that didn’t have to be perfect, the pure adrenaline of being sixteen, and all the things I wanted life to be:

Jonah – for watching Once Upon a Time with me

You stepped into our rather exclusive circle in the most fitting way—an accidental trip to Cedar Springs that I will not be letting go of anytime soon—not only inciting the newest phase of our teenage years but becoming the fourth in our group. I don’t think we’ve made things necessarily easy for you, but you’ve adapted well, and you’ve shown Kennedy what she deserves in a way that could only be described as “Prince Charming,” setting standards Kat and I will be hard-pressed to find people to match. (Sorry, was that sentence too long for you?) Aside from possibly Kat—although she’s not the fighting type—I’ve never met somebody who mirrors my willingness to commit a crime for Kennedy. And most importantly, you’ve made her happy, so thank you. But it really all pales in comparison to the fact that you’re willing to blast the Once Upon a Time soundtrack in the car with me.

For letting me pick you up to get smoothies, only to watch me breakdown in the car 20 minutes later. For bringing me a succulent and a smoothie the next day that nearly brought me to tears when I came home from work. For texting me every day to ask how I was and what I’d accomplished. For being proud of everything I’d done, even if it was next to nothing. For driving 45 minutes round trip a week later just to get that smoothie. For anything and everything in between, for five years of friendship that must have been my whole life because I can’t remember anything without you. It’s too much to put into words—all just little stories like this one, little stories that I couldn’t possibly love you more for. Thank you for coming along for the ride, for distracting me when I’m sad, for every time that I would have been hopelessly lonely without you. I love you immensely, more than this paragraph can possibly convey, but I hope it can communicate even an echo of how much my heart is overflowing for you—and oh, look, I’m nearly crying over this in my room at 2:54 am.

Kennedy – for knowing that sometimes texts are too much

I don’t have to tell you anything; you already know. You already know when I don’t text you that it’s too much to talk about, when my energy doesn’t match its usual caliber that I’m falling again, when I call you if it’s urgent or not. And you already know how much I love you, but I’ll still try to say it anyway. Because you deserve to hear it. It’s the platonic nature of our love that has made it last so long; it’s steady—not volatile although I may be. You balance me out, calming the intensity of every mood swing. You question my impulse purchases when you know I’ll regret them, but you nonetheless get in the car with me at 1 am on November 1 so that I can buy a Santa hat at Walgreens. I believe in soulmates because of you—soulmates that don’t need to be romantic. Because only a soulmate can be who you are for me. So, thank you for nearly ten years of late nights and impulsive grocery store trips and board games and video games and coffee on the way to church and theological discussions afterward. For baked potatoes, hate-watching Twilight, camping and canoeing, trips to the library, and every moment that belongs to us. Thank you.