Peach Pit speaks on relationships through a unique album 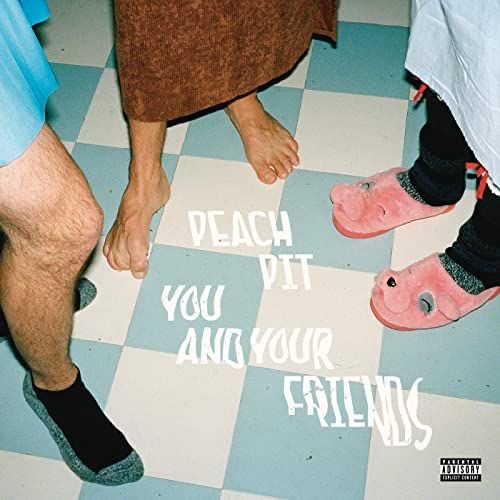 From throwback 80s music to unique indie-rock, the band Peach Pit continues to pave the way for their own style of alternative music perfect for any emotion-filled, nostalgic, vibe-worthy music session.

Consisting of four members—Neil Smith, Mikey Pascuzzi, Peter Wilton, and Christopher Vanderkooy—this stylish band with multitudes of almost cringe-worthy yet adored 1980s fashion creates music like no other. Despite rarely taking themselves seriously, this alternative band provides the perfect vibe for any occasion.

Mixing between indie-rock with a hard-core guitar and vintage-inspired alternative beats that juxtapose soft yet witty lyrics, Peach Pit’s new album You and Your Friends consists of twelve tracks discussing relationships.

The album’s beginning song, “Feelin’ Low,” pushes the idea of relationships on the listener and discusses the effects they have when in one. Despite the song embodying the perfect late-night car ride song that anyone could sing to, this track concentrates on feeling lonely amid a crowd. The singer craves to connect with his significant other but continues to deprive himself of a connection, moving from person to person.

“Feelin’ Low” focuses listeners like me on the depths of our emotional states as we lose ourselves to life. Ignoring my own well-being, I strive to gain relationships with others in hopes of filling a void, yet I always come to find out that the only person who can be a perfect match for me is myself. Despite surrounding myself with crowds of strangers or friends, loneliness follows my heart as I deprive myself of the real connection between my mind and body. This song captures just that.

Intertwining a multitude of mental health topics, alongside satire filled music and throwback sounds, Peach Pit extends their topic of relationships into the song “Black Licorice.”

Discussing the narrator’s impending insecurities of being a burden to those around them, listeners discover the symbolism of the black licorice itself. Characterizing the candy that no one ever craves to pick, the singer feels as though his friends would rather be alone than with him, and, in return, he’s left alone to his thoughts.

“I’m just black licorice, and all the people that I know would rather leave me in the bowl.”

Often, insecurities disrupt my relationships and undoubtedly force me to feel as if I’m a burden to others. Unable to voice my thoughts, the action of cocooning myself away from others disconnects me from relationships I crave to hold.

Peach Pit’s honest confrontation with relationships and insecurities regarding feeling like a burden touches listeners who often use isolation instead of facing reality. Messages like these push us to face our fears and talk to our significant others.

Regardless of the deep messages within both “Feelin’ Low” and “Black Licorice,” these catchy beats have me embarrassingly singing along. Gifting me an aesthetic vibe and unique rhythm, this band’s taste in music runs within each note of every memorable song.

Continuing on without missing a beat, “Figure 8” gifts the perfect soundtrack for rainy days bundled inside. Keeping close to their unique sound and heartfelt messages, this song covers relationship insecurities.

Following the feeling of someone being “out of their league,” this song encompasses two lovers. Like many others including myself, doubting self-worth and importance delays us from enjoying life. Tending to put others on pedestals, I find myself deserting my significance to those seemingly better. “Figure 8” reaches for listeners to defeat insecurities and self-doubt, mimicking in the footsteps of the other songs.

On the other hand, this track enlightens how relationships can work to better the two people involved as the singer’s girlfriend encourages him to do what he loves. Despite some connections becoming toxic, relationships aid humans in growing and learning from their past. Having gone through both good and bad relationships—platonic or romantic—they have taught me what to desire in future bonds and the importance of putting my mental health first.

Remaining on this positive note, the album’s track “Brian’s Movie” almost instantly became my favorite song on the album. Offering Weezer’s “Island in the Sun” vibes, this Peach Pit track has me wishing it was summer.

While consisting of a slightly more upbeat rhythm, “Brian’s Movie” dedicates its message to a sadder yet relatable occurrence. From the singer’s point of view, he observes his best friend distance himself as he goes off with his new lover. Watching them walk away, lyrics jade his loneliness as he waiting for his best friend to return.

“Waiting out on you coming back around or just faking out, seems it’s my upside now.”

Taking up prominent space in my life, relationships can often get in the way of each other. Forced to choose between a lover and a friend creates difficult and heartbreaking decisions; however, multitudes of people make these decisions. Experiencing the end of a friendship can be more devastating than a breakup as I watch someone who was once like family leave my life.

Following closely behind on my list of favorite songs is the album’s final track “You and Your Friends”.

Backing the reality of relationships, “You and Your Friends” skims the depth of lovers’ connections and instead discusses the narrator’s infatuation with a hypocritical girl. Incidentally feeling this same infatuation with someone, this some-what confident song, once again, is unsettlingly relatable.

Relationships seem to be on the minds of close to everyone; they affect us all. Creating a relatable album for any age group was the goal for this twelve-song album, and it is a goal they seem to have reached.

Having experienced many of the topics Peach Pit considers within You and Your Friends, they undoubtedly hit the bar for a perfect and easily singable album.