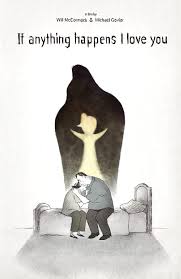 Colorless. Silent. Brief. In 2020, that’s all that is needed to make an impactful movie.

The Netflix short film If Anything Happens I Love You undeniably confirms this theory with its absence of noise, black and white scenery, and concise twelve-minute duration time.

The average film has longevity—it’s stretched out and lengthy because, in most cases, a durable amount of time is required to portray awareness or a specific message.

In order to leave an impact on the audience, a film requires countless traits such as anticipation, climax, and execution in both acting and cinematography. Most movies are hours long just to enact these factors and get the overriding message across.

If Anything Happens I Love You has pulled off each and every one of these crucial components to build a successful movie—but in just twelve short minutes.

As tragic as it may be, there have been a total of 66 incidents of gunfire confirmed on school grounds around the country this year (Gunfire on School Grounds in the United States, 2013). If Anything Happens I Love You was created to show the grievance that loved ones have to trudge through while dealing with a lost life and a mourning heart.

It is centered around a mother and a father who have lost their little girl in a school shooting. Neither of them know how to deal with their pain, resulting in cracks in their own relationship. They both feel so stranded and broken—so much so that they forget that they have each other’s shoulders to cry on.

The film reflects back on the child’s joyful life and sincerely shows how she lived to her fullest extent while not even knowing that she’d barely even make it to her teenage years. It emphasizes her love for soccer, her family, her friends, and even her school. It shows how happy and carefree her childhood was until she was a victim of a sickening disaster.

As mentioned, this whole story is portrayed in black and white, but it also features simplistic sketches; the entire movie is seemingly sketched out with a pencil-looking animation. The parents have ghost-like figures alongside their real selves who lead the viewers through the journey of their daughter’s life, a hidden message of who they’ve become. At the beginning, it shows the parents’ figures fighting constantly, but the figures dissipate whenever their daughter is present; their daughter unknowingly resolved so many of their personal problems simply with her unwavering love.

One of the most crippling parts of the whole film, at least for me, was when their daughter was walking into school for the last time. While her actual parents were happily waving goodbye, eyes watering with happiness, the alternate side shown through the parents’ imaginary figures showed them begging her to not enter. Although they represented ghosts, the power and emotion that prevailed was enough to make anyone cry. They are so blatantly trying to warn and halt her, but of course, she cannot see or feel their pleads.

Despite the utter silence throughout the film, a section towards the middle, specifically when they began a rewind of the little girl’s life, features a meaningful song that is used as a background play: the song “1950” by King Princess. It truly contributes so much to the story; it creates a sense of bliss that corresponds to the bittersweet feelings when watching the last joyous moments of the daughter’s short-lived life. Now, whenever I hear this strong song, I am evidently reminded of the movie that left me the most heartbroken. That itself shows how powerful not just the song but the entire film is, and it shows how it leaves every single viewer with a heartache.

The title If Anything Happens I Love You is crafted from a text message. The last text message sent from the little girl’s phone to her parents’. This choice of a title is so unbelievably raw, because it is proving how this has sadly become more and more of a norm in America. Nobody should ever have to go through the pain of losing someone in a school shooting; it is so insanely heart-wrenching knowing that a school where a shooting occurred—one that was trusted enough to keep the children safe while learning—resulted in young deaths.

If Anything Happens I Love You left me distraught with my emotions. My heart goes out to all of the school shooting victims around the world, and this movie put that into perspective with justice to the topic. It spread the necessary awareness of how tragedies like this undoubtedly destroy a family’s life entirely.

Twelve minutes of sorrow. Twelve minutes of sympathy. Twelve minutes of pure reality. Not one word is spoken within this short movie, not one ounce of color either, but a story like this doesn’t need any of those elements. Its rawness squeezed my heart to a point of explosion. No child should ever have to press send on a text message reading these six frightful words, and If Anything Happens I Love You is unquestionably a touching piece of work that will forever remain vital for our world.