Can You Shoot The Moon? 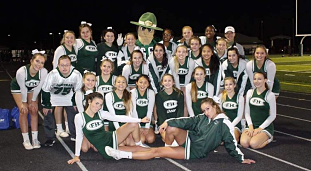 Throughout the years, their numbers have grown immensely. Fans can hear them from the top of the stands and the chants get ingrained into the minds of students and fans alike. You can hear the humming of chants throughout the hallways daily. The cheerleaders have made a lasting impact on the students, and it will not be leaving anytime soon.

Just three years ago, there were only 13 Varsity cheerleaders. Now, there are 30.

“The numbers are growing primarily because of the interest,” Coach Stacy Steensma said. “We spend a lot of time with our youth program [where] the Varsity girls are the coaches. Our feeder program is so strong, as well as a [there being a] higher recognition for cheerleading.”

The feeder program is also known as the youth program. It is where the Varsity girls coach the younger girls. According to senior captain Izzy Berry, they have a 3rd and 4th grade team, a 5th and 6th grade team, as well as a 7th and 8th grade team.

Many of these girls come to visit Varsity sideline cheer at the football games. Younger girls often become intrigued by the cheerleaders and wish to be a part of the program.

Originally, the program was ready and able to have two teams, a JV and a Varsity. However, when the JV coach had to back out of the position, Steensma had the thought to combine the teams to create one giant team.

“I decided that the JV girls deserved an opportunity to be on Varsity, too.  I wanted to coach all of them, instead of trying to hire a new JV coach,” Steensma said.

Steensma weighed all of her options and realized that because there were such wonderful veterans of the program still on the team, that she would be able to take on this monumental task. Steensma was able to see the talent that was right in front of her and make it into something amazing. Looking at the team, there is no divide and there is no way to distinguish the JV and Varsity status, which was only established on paper until late August.

“I have some really good, quality leaders,” Steensma said. “[There are] four seniors this year. I have two captains, Izzy Berry and Martha Tinker, and the other two senior leaders are Jocelyn Prinz and Gabby Homant.”

Izzy has been on the team for her entire high school career. She has seen the program rise from the gutters and is now able to leave when it is as recognized better as it has ever been.

“My freshman year we, had a 13 person team and the reputation of cheer in our school was really different than what it is now,” Izzy said.

Now it is everywhere. The number of girls a part of the FHC cheer program has increased significantly. According to Izzy, taking on a team of 30 was a large task, but she was ready for it. She was thrilled to be able to answer the questions of underclassmen and give them the most direction as possible and to make her coach’s job as easy as possible.

Izzy also said that she had no idea what her life would be without cheer.

Many of the cheerleaders have been cheering for years, including freshman Meredith Carpenter. Carpenter has been cheering for since fourth grade and hopes to continue throughout the rest of high school. But when she came upon cheerleading, it was almost by accident.

“All of my friends did [cheerleading], so I joined, too,” Carpenter said. 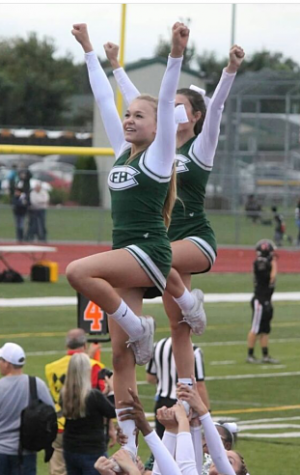 Because of joining cheer with her friends in fourth grade, she has been able to gain friendships all through cheer all through her life. According to Meredith, she does not know how she could survive without them.

Cheer is not only an after school activity for these girls. It is a lifestyle. They spend countless hours in the gym learning how to fly, to flip, and how to tumble. They are able to do things that normal people can only try to accomplish with months or even years of practice. These girls deserve the recognition of everyone, as well as the respect. They work just as hard as any sport throughout the district. They lift weights, they run, and they train.

They are not just a group of girls that stand around on the sidelines and clap; they are a group of elite athletes that work hard everyday to attain their goals.

“Unless you have been in it or around it or involved in it, you don’t really know how challenging the sport is,” Steensma said. “They train just as hard, if not harder [than the other sports]. They know that they are athletes.”