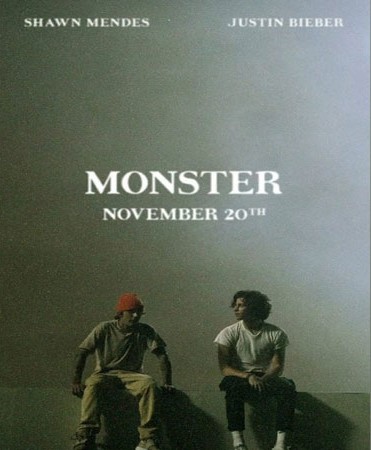 Silence does not pair well with me. With no sound, I am extremely uncomfortable and uneasy. That is why I am constantly listening to music.

For hours upon hours, my ears are blessed with the music of talented artists. Music gives me a sense of joy and safety—it is something that I can not live without.

I’m always looking for something new to listen to, and “Monster,” Shawn Mendes’ latest song, was exactly what I needed. Accompanied by Justin Bieber, the two of them sing about the struggles of making mistakes.

At nineteen years old, Bieber was arrested for drag racing under the influence of alcohol. Not long after that, he got charged with assault for hitting a limousine driver in Toronto, Canada. He has admitted to his mistakes and has since apologized. Still, six years later, Bieber struggles with people accepting that he has changed and his mistakes are in the past.

In “Monster,” Bieber sings, “I’ll take responsibility for everything I’ve done, holding it against me like you’re the holy one.” Of course, what Bieber did in the past was wrong, but he is trying very hard to regain his trust in the people and the media; this song did a fantastic job portraying his regrets.

Mendes has been extremely successful with his music career. When I was nine years old, I saw him in concert in Chicago, Illinois. The concert was for Taylor Swift’s 1989 album; but, for nine-year-old me, Mendes was the star of the show.

Since then, Mendes has sold out in concerts worldwide for his tours and has recently come out with a documentary on Netflix about his singing career. The downside of being a popular artist like him is that mistakes are widely frowned upon.

Bieber and Mendes sing in the chorus, “But what if I, what if I trip? What if I, what if I fall? Then am I the monster?” The two are afraid that if they make one mistake, they will be looked at as the “monster.” Mistakes are made by everyone, even their supporters, yet despite that, everyone looks at them as “perfect.” These slip-ups do not define a person, and therefore should not haunt them for the rest of their lives.

Along with the lyrics of “Monster,” the flow is fantastic. The majority of the music is a combination of soft and hard beats that create a pleasing tune. The off-beats were gentler, while the on-beats were much sharper and established.

The song has a relaxing, contemporary feel to it. But with that relaxation, the sound also correlated perfectly with the lyrics and meaning of the song.

As an avid listener to music in general, I am very picky about whether or not a song is worth being played off of the Bluetooth speaker I always steal from my mom or if I need to press the skip button. I will gladly play “Monster” all the way through without hitting “skip.”

From its relaxing sound to its essential message, “Monster” is a song I will always suggest to a friend and will be putting in plenty of my Spotify playlists.