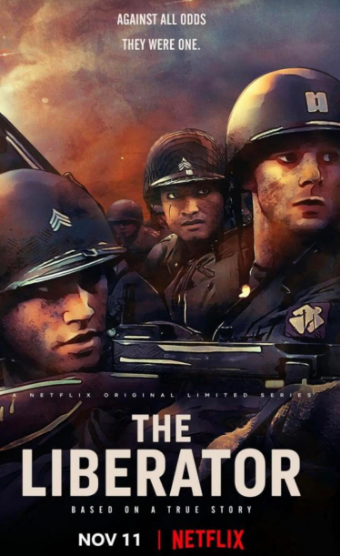 A Titan among streaming services, Netflix is firing a constant barrage of exclusive series and movies onto their site for viewers to enjoy. Last month, on November 11th, Netflix released The Liberator: a new animated mini-series based on the true events of the 157th Infantry Regiment in WWII.

When selecting The Liberator from the menu, the very first thing I realized was that this was no ordinary kind of animation—it took me the first few minutes of the episode to figure out what was going on. The art style of the animation was quite similar to that of a comic book, but what was so odd about it was the way the characters moved.

After pausing and doing some research on the development of the show, I learned that the production crew had used a technique called rotoscoping. The process involves using digital motion capture that is then drawn over by the animators. The result is an animation that is unlike any other I’ve seen.

After wrapping my head around what I was seeing, I became quite entranced by the actual storyline of the series. Set in the early to mid-1940s, a group of soldiers, unlike most others, are on their way to victory and glory by fighting the Nazis on the west coast of Italy.

The second episode delves deeper into the workings of the misfit group of soldiers and how they came to be under the command of Officer Felix Sparks. Made up of Native and Mexican Americans, the 157th was not the most popular platoon with the higher-ranked white officers.

Breaking through the barriers put in place by racism, the 157th went on to become one of the most successful regiments on base. This was especially nice to see because the narrative of WWII is so often considered as the Germans and Japanese are bad and America, Great Britain, and France are the good guys. However, The Liberator goes on to show that there are bad guys everywhere, including the U.S. Army.

After the first two episodes out of four total, things started to get a little boring and cliché. I was waiting for the next action sequence to witness, once again, how much the animation computers had to flex their digital muscles to put the images together.

As the war progressed, the protagonist saw many promotions come and go. Although now in a position where he could direct his men from the safety of a command post, Captain Sparks still chose to fight with his men and, above all else, make sure they get home in one piece.

I was a fan of The Liberator. It shined a light on a different side of WWII people aren’t used to seeing. The animation was absolutely dazzling, and the fact that it was based on true events makes it all that more special—knowing that these people actually existed and went through these events made it feel more real as a viewer.