Bo Jackson: the greatest multi-sport athlete of all time? 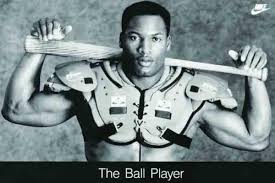 When you think of multi-sport athletes, your mind automatically jumps to Bo Jackson and Deion Sanders. Bo Jackson, “the jack of all trades,” is the best multi-sport athlete of all time, and let me tell you why. He played football and baseball, which are in my opinion some of the most physically and mentally challenging sports. He didn’t only play them, he beat them too. Bo is the only professional athlete in history to be named an All-Star in both baseball and football.

Bo’s mom died of cancer when he was in college, and her last question to him was, “are you going to continue to play sports?” and he said, “My first hit will be for you.”

Guess what young rookie Bo did on his first MLB hit: he hit a home run. On his first at-bat in the professional ranks, Bo Jackson tanked one over the fence and into the crowd as he was rushed with emotions of love toward his mom.

The crazy thing with Bo was his athletic ability. He ran track, played baseball, and played football. Bo was ready for track practice when he was met by scouts on his way out. They wanted him to run a 40-yard dash to see how fast he truly was, and he ran it and finished with a time of 4.3 seconds. His coaches knew he didn’t run his hardest, so they made him do it again with all he had.

“Well, you better open that door across the room, because I’m not stopping quick,” Bo had said. The scouts then opened the door, and he lined up to run it again. This time he pushed all the way through and ran out of the door and didn’t come back. At the end of the day, his coach told him the time, and everyone was speechless. Bo ran an unofficial 4.13 40 yard dash, which would be the fastest time ever recorded.

During Bo’s football career, he faced a terrible hip injury against the Cincinnati Bengals that led him to quit football and go into rehab. After rehab, he went into baseball, a sport with minimal contact and less risk for reinjury, and had great success there.

In Bo’s football career, he racked up 2782 rushing yards on 515 carries with 16 TD’s. Riding along with the LA Raiders his entire career, he played only four years and put up these massive numbers. Can’t forget about the two receiving touchdowns either, along with his almost 400 receiving yards.

Bo and Deion were both amazing at what they did, but I would say Bo Jackson accomplished more in a quicker span, but some could argue that Deion did more. Overall, Bo Jackson and Deion Sanders made a huge impact on the topic of multi-sport athletes and will continue to be talked about their great successes in both sports.

Go check out Justin Osterhouse’s story on Deion, and you decide who is the best multi-sport athlete.