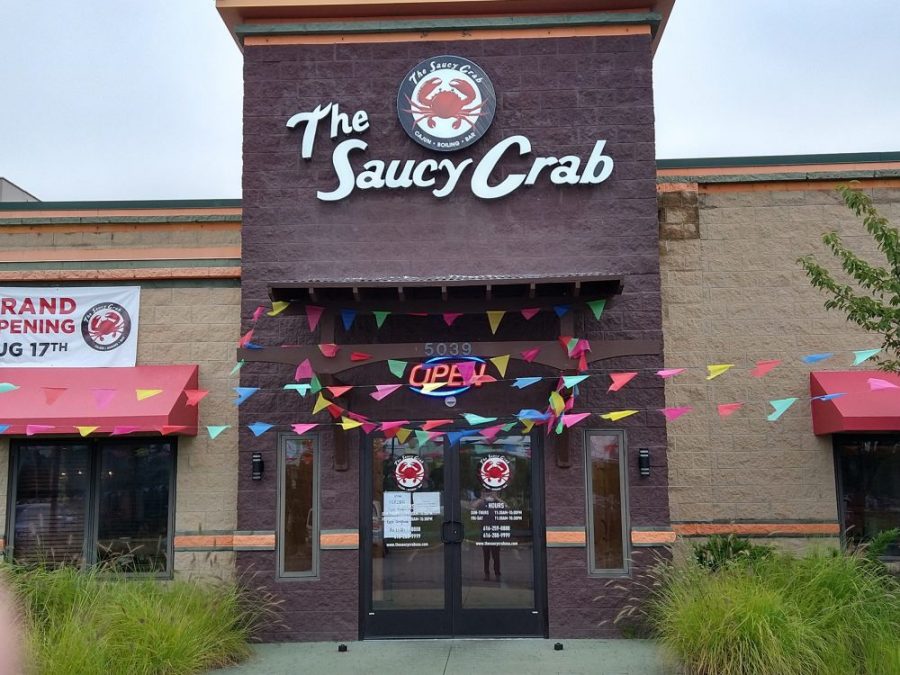 Being a person who is not traditionally fond of seafood, The Saucy Crab was able to shockingly provide my entire family with a tasty and enjoyable meal.

Located on 28th street by the highway exit, this unassuming restaurant stands right next to iHop and across the street from Arby’s. And despite the belief that seafood is expensive, the menu boasts reasonable prices. Three separate meals for my family came to around $48.00, which seemed very reasonable.

Our food initially was packaged in two black styrofoam takeout containers and one massive plastic bag. Within the plastic bag it held another plastic bag full of shrimp covered in an orangey-red sauce, a small piece of corn, and a potato floating in the bag along with the shrimp.

As soon as the bag of shrimp was open, the room filled with the smell of the sauce that covered the plump shrimp. Immediately, we all realized that eating the shrimp wasn’t going to be pretty, which occurred when I saw that the restaurant provided us with a bib, plastic gloves, and a wet wipe.

As I took the first bite of the tilapia and fried shrimp, it was almost as if I could hear the crunch of the shell from across the room. Biting into the tender shrimp was incredible; it wasn’t too firm, nor too soft. It was just right.

My mom offered me a taste of her tilapia, and for someone who doesn’t enjoy fish, I must say it was superb.

As for the onion rings that were provided as our sides, I labeled them as typical onion rings. They were nothing special and rather generic, just like the ones you could buy at a typical grocery store. There were a variety of sizes from small to gigantic that were included in the bunch. They were mediocre at best; however, they provided quite a few per order.

We noticed that the order came with a cup of salmon-colored sauce. Being the adventurous person that I am, I decided that I should try it, and it was insanely delicious. It was a somewhat familiar taste, almost similar to Thousand Island dressing. It complemented the shrimp very well.

Halfway through our meals, we all realized that the portions they provided us with were larger than we thought. I left about half my meal for later; my mom was in the same boat with having one piece of fish left. Unlike other restaurants that serve small portions, The Saucy Crab was able to provide us with more than enough food.

As for my brother who is extremely fond of seafood, he thought it was a two-plate meal, referring to the shells taking up one plate and the rest of his meal in another. He was the only one who was able to finish his entire meal due to his intense love for shrimp and his huge appetite.

Towards the end of the meal, my mom dove into the potato that was included in the bag of shrimp. I tried a bit, and the potato was surprisingly good. It was cooked perfectly with just the right amount of sauce covering it.

We all were pleasantly surprised with our meals because of the portions, price, and taste.

I might not be a huge fan of seafood, but I really enjoyed everything we ordered from The Saucy Crab. It was the perfect way to expand my palate and open my eyes to newer and different types of food.