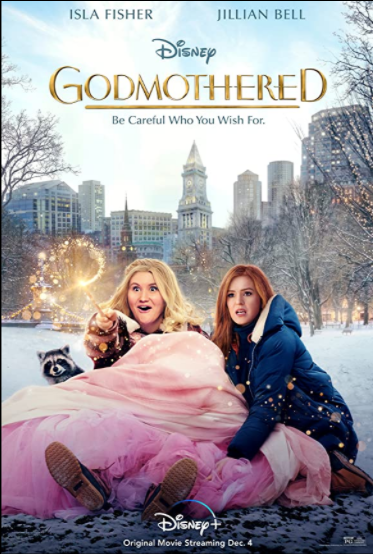 When I was younger, I wore a princess dress everywhere. It did not matter what season it was; I would wear a dress and heels anywhere that I went. Naturally, I saw an advertisement for Disney+’s Godmothered and told myself I would watch it no matter what for the sake of my affinity for princesses as a child.

Set during the holiday season, Godmothered follows the story of Eleanor (Jillian Bell), an inexperienced godmother-in-training who is hoping to save her home: the Motherland. Eleanor finds out that the training school for godmothers will soon shut down and that she will become a tooth fairy instead. This irritates Eleanor so much so that she finds the last letter ever sent to a fairy godmother in hopes that completing the final assignment will save the Motherland.

Unfortunately for Eleanor, the letter was written by Mackenzie (Isla Fisher), a ten-year-old girl from Boston, Massachusetts. And this letter was written thirty years ago, making Mackenzie a forty-year-old single mother working for a demanding boss at a television station. The worst part is that Mackenzie no longer believes in happily ever after.

In addition to this dilemma, Eleanor’s teacher Moira (Jane Curtin) has discovered Eleanor’s escape and is furious. After all, Moira never permitted Eleanor’s assignment.

Despite these challenging circumstances, Eleanor is determined to follow the rules of being a fairy godmother and give Mackenzie the happily ever after that she deserves, all while letting a raccoon named Gary do the housework.

From the moment Eleanor went from a goody-two-shoes to a rule-breaking machine, I was enthralled. My intrigue grew exponentially when Eleanor displayed a love for singing—she is not very good at it—which was something from a Christmas princess movie that I could finally relate to.

Eleanor’s entrance into the real world from the Motherland is a flawless representation of maladroit people, myself included. The trip through the portal reminded me of Enchanted—one of my favorite movies—when Giselle climbs out of the sewer. Instead of a sewer, Eleanor comedically slides across a frozen pond into a snowbank.

Throughout the movie, Eleanor—and the many things she creates—becomes a magnet for disaster. From city-wide blackouts to allergic reactions caused by shellfish, Eleanor goes through a lot when she is away from home. The attraction to problems that Eleanor faces makes this a must-watch movie.

Part of this comes from the comedy. Godmothered is described as a comedy, and I must say I agree. Anyone who knows me will know it is hard to get me to laugh out loud—my laughs usually are just me silently shaking—but this movie actually made me chuckle, possibly even screech, several times.

Godmothered may seem like a typical family comedy, but at its heart lies a wonderful message. In the real world, we may not be able to live happily ever after, but why not just live happily? This is the true meaning of the movie. Not that raccoons are good at sweeping—as shown in the movie—or that fake news is prevalent. Its focus is on living happily and helping others to live happily, too.

In the end, Godmothered made me laugh like no other, and for a family holiday comedy, I honestly recommend it.