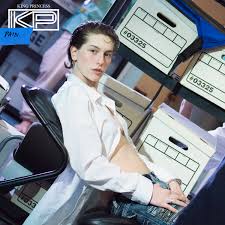 I would say I listen to all genres of music. Whether it be pop, country, rap, or indie-style music, I have listened to it all.

While I was scrolling through my Spotify “Discover Weekly” playlist, I came across an artist I had never heard of before—King Princess (Mikaela Mullaney Straus). Her album cover of her lying in astonishing makeup was what immediately jumped out to me, and I was eager to listen to her newest album.

Her last album, Cheap Queen, was released back in 2019, and ever since then, I have been hooked on her music. Just a few months ago, I found out she was releasing a new song; to say I was excited would have been an understatement.

Her latest song, “PAIN,” caught my attention very quickly. It starts off with a quick beat that morphs into what sounds like maracas and drums. While the instruments do seem to be a strange mix, King Princess makes it sound perfect. This already catchy beat only seems to get more melodious as the song continues.

I was instantly hooked on the beat that the song begins with, and it only got better when King Princess’s voice is welcomed into the song. Her voice starts off strong and only seems to get stronger during the whole three minutes. After one line of the song, Straus incorporates the name of the song into the beat. In a quick succession, the instruments die down, and I hear her voice and some backup singers sing “pain.”

The lyrics being somewhat repetitive become very catchy and easy to be hooked onto.

Normally, I am not a fan of repetitive songs, but I have to make an exception for “PAIN.” While the lyrics are sung over and over again, the beat and melody of the song continuously change, and I’m surprised with a new beat in many places throughout the song.

Throughout the song, King Princess sings about how she is constantly overthinking her relationships. Whether it be contemplating if they hate her or want to break up with her, she sings about how she continuously turns her love into pain. These lyrics really resonate with me and the notorious over-thinkers.

Nearing the end of the song, King Princess finishes full-circle with the beginning tune closing out the song. I found that this makes the song more interesting, it and almost gives me a full musical experience; it’s her final thoughts rather than leaving me with incomplete notions.

After listening to the entirety of “PAIN,” it is evident King Princess is emphasizing a few lessons from not only her newest song but also from songs in the past. In all of her songs, she sings lyrics that are simple yet so deep that they layer knowledge on top of knowledge, showing what she truly means.

While I have not been a fan of King Princess for too long, after hearing this song, I know that I will be able to trust her to always provide amazing hits.