Randy Moss: the greatest wide receiver to ever play in the NFL? 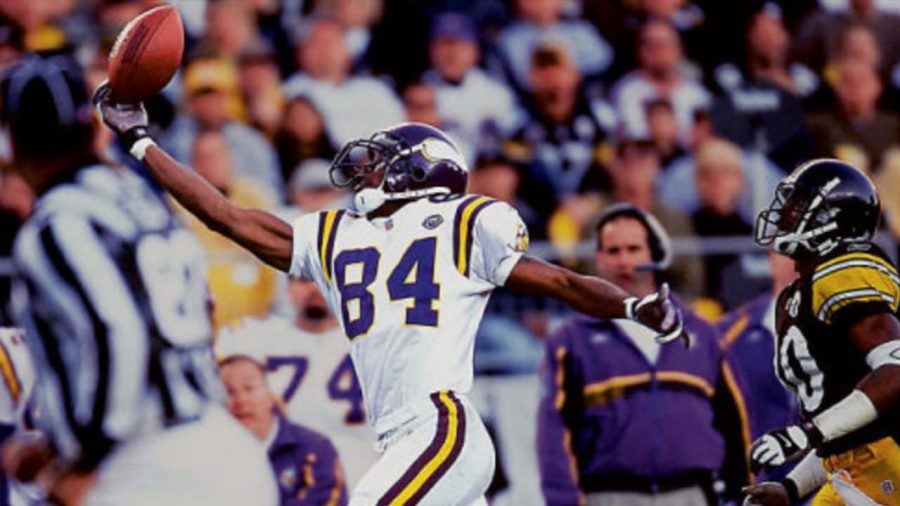 Randy Moss, one of the greatest receivers to ever play, was born in Charleston, West Virginia. He grew up with his brother Eric, and his sister Lutisia. Eric Moss played college football at Ohio State University. He was an offensive tackle for the Minnesota Vikings in 1997, and then played guard for the Scottish Claymores in the NFL Europe League in 1999. Sadly, Eric passed at the age of 44, no information on how that happened. His brother Randy was an extraordinary athlete; he played football, basketball and track in his high school career. On the football field, Moss led the DuPont Panthers to back-to-back state championships in 1992 and 1993. He was a star at wide receiver, but also played free safety, returned kickoffs and punts, and was the team’s kicker and punter—he could do it all.

In Randy’s first and only year in college at Marshall University, he managed to put up 96 catches for 1820 yards and 26 touchdowns. That was his only year in college, as many would call him a “one and done”. He and many others believed that he was good enough to go to the NFL after one year of college and he sure was. Many scouts kept an eye on Moss throughout the season, even though he did not go to one of the “big name schools”.

Randy got drafted 21st overall in 1998 by the Minnesota Vikings, and made that place his home. Not everyone knew who he was, but after the first couple of games, he made sure they knew his name. Moss’ first NFL game would also be his first multi-touchdown game as he recorded 4 receptions for 95 yards and two touchdowns. His first NFL reception came on the third play of the game on an 11-yard pass from Brad Johnson. His first touchdown was a 48-yard acrobatic grab over defensive back Floyd Young late in the first quarter, in which Moss juggled the ball 3 times before securing it for the score. He added a 31-yard touchdown reception on the Vikings first possession of the second quarter to give the Vikings a 21–0 lead.

In 2005, Moss was traded to the Oakland Raiders, who only made it as far as the divisional round in the playoffs in 2006. Losing to the Denver Broncos made Moss mad, he was looking for a new team and he had 2 options: The New England Patriots and the Green Bay Packers. Brett Favre, a legendary quarterback for the Packers, knew that having Moss on that team would be almost like a cheat code; however, he went to New England. His first game in a Patriots uniform came against the New York Jets in Week 1. He quickly quieted critics who claimed that his skills had been slowing down, by hauling in nine receptions for 181 yards, including a 51-yard touchdown pass in which he ran past three Jets defenders.

Moss ended his career with the Patriots, although he was in the Super Bowl 2 times, he came up short and retired without a ring. Although his stats made up for it, Moss had 982 receptions for 15,292 yards—that is 15 yards per catch—along with 156 receiving touchdowns.