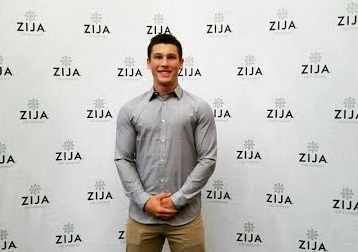 School. Family. Friends. Job. That’s what the normal teenager has to go through and balance in a single day. Many people get overwhelmed with the amount of commitments they have, but imagine that times two. Junior Cullen Dodge has to balance that.

Imagine juggling the previous list and then adding: Fire department. Staying in shape. Travel. And managing a business.

“I don’t see myself as a normal teenager, whatsoever, not at all,” Cullen said.

Cullen definitely does not have to work hard to prove that he is not the normal teenager. Outside of school, one primary activity is working at the Cascade Fire Department. Cullen works there as a volunteer and does everything the firemen do besides going into burning buildings and treating patients. Junior Havyn Boike, who works with him, thinks very highly of him.

“[Cullen] is the most down to earth person I know,” Havyn said. “He gives up his time to go to fires and car accidents to save lives and give back to the community.”

The two of them make themselves available whenever there is a bad accident or the fire department needs an extra hand. They work long nights for no pay, just simply to help others. This comes at a price of course.

“[The fire department] has its good stuff and its bad stuff,” Cullen said. “But, there’s a lot that I’ve taken out of it and gained emotionally, physically too.”

The two of them have experienced death and horrible accidents first-hand, but they agree that helping others is a very worthwhile cause.

Cullen also helps people through his business. He is an independent distributor of the nutrient supplement Zija. In such a large company, it is easy to blend in with other employees, but his mentor Jesse Bower says Cullen stands out completely.

“He started off the youngest business owner in the entire company…” Bower said. “He’s set the example for young people. Around the world, young people have seen Cullen and they’ve tried [Zija]. He has influenced thousands of young people and he doesn’t even realize it.”

Although it may seem like Zija is just a nutrient supplement, it is so much more than that. Cullen says that the supplement helps people achieve mental clarity and it really can impact more than just physical health.

Zija has given Cullen many opportunities to travel. Recently, he went to Salt Lake City with Bower and is planning to go to Orlando next summer with junior Madi Winter. When he travels, he goes to conferences and builds his network for Zija. This makes him miss school, but the lessons he gains from going to conferences cannot be taught in a classroom.

Another source of income for Cullen is personal training. He trains people, but for him, it is not just about getting them into good shape.

“While I’m training these people physically, they hear where I am now compared to where I was before,” Cullen said. “They learn knowledge that I’ve gained over time and I can use what I’ve learned to help other people learn and grow.”

Cullen stays so busy because one simple reason: happiness. Last year he hit rock bottom, but now, he has made many changes in his life to help not only himself, but others.

“I try to stay as happy as possible,” Cullen said. “I don’t spend time doing things that aren’t going to matter.”

One thing that matters a lot to him is learning about living the most fulfilling life. In order to do this, he reads books about personal development.

“He highlights and reads five pages a day,” Madi said. “I hate reading. I hate it. I started reading this personal development book [because Cullen recommended it], and it’s helped me a lot.”

Currently, Cullen is reading 17 books about bettering himself. These books help him gain knowledge and wisdom to not only make his life higher quality, but those around him.

Daily, he tries to make a difference in others’ lives. Whether it is through the fire department or his business, he tries to impact others in the biggest way possible. His goals to help others even shines through in his plans for the future. After high school, Cullen plans to go to the Navy Seals.

“I’ve always wanted to be in the military,” Cullen said. “I was looking for the biggest opportunity to make the biggest impact in the military… [the war is] really hard to hear about and not be able to make a difference right now.”

He wants to keep the citizens of the United States safe and is willing to do whatever it takes to protect those around him. After the military, he wants to build his business, but it is not just about the money for him.

“[I want to be] rich. No, happy. I have a lot of different goals but I want to be happy, and I am happy,” Cullen said. “One of the hardest things I’ve learned throughout this past year is that happiness is in the journey and not the destination; there is no destination for happiness.”

Cullen’s goal is to impact as many people in a positive way he can. Many of his aspirations in his life are centered around others, not himself. He aims to help and guide as many people as he can.

“Live intentionally…” Cullen said. “Intentionally add value to others. I don’t go a day without paying some kind of compliment or adding value to somebody else.”