Through creating their own clothes, students are able to express themselves through unique pieces 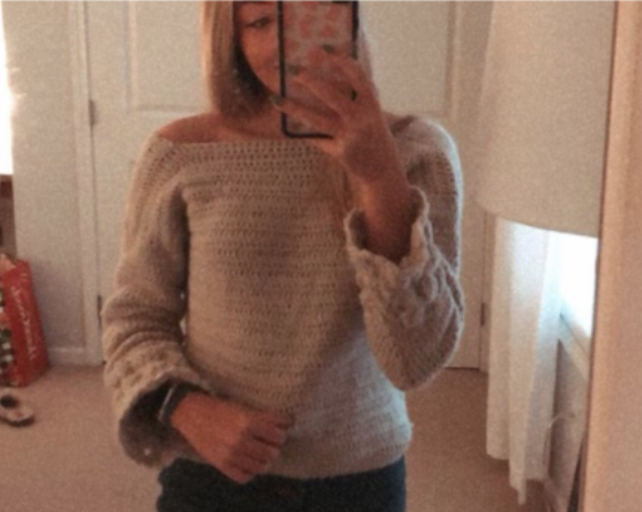 Junior Emily Smith believes the clothes she wears are a crucial part of showing her individuality and expressing herself.

With social media, store catalogs, internet ads, and shop windows being overfilled with an alluring variety of clothing options, she’s able to amass a closet that’s representative of herself.  But despite all the options out there, she has realized that it is sometimes impossible to find the exact item of clothing that she is envisioning or that the price of that item is just too outrageous.

To solve this problem, Emily learned to crochet her own tops that were exactly what she was looking for at a much lower price, a skill she learned from her family.

“When I was younger, my grandma taught me how to knit,” Emily said. “But I didn’t like it, so then my mom wanted to learn how to crochet, and I did, too. So then I figured it out, but she couldn’t, so ever since then, I’ve just done it by myself.”

“I just did it,” Emily said. “I never followed any tutorial or pattern. [I] just freehanded it, and it worked out. I sometimes do [use a pattern] for measurements, but other than that, I don’t use anything.”

Surprisingly, Emily’s creations only take one to two hours each. She finds time to work on them after homework, while watching TV, and even on Zoom calls during the day.

“I’ll just do it for fun,” Emily said. “[I mostly work on them] in the summer because that’s when I can make tank tops.”

Although Emily finds herself in periods of time where she can’t stand the idea of picking up the crochet needles, she always ends up back at her projects, working tirelessly on more crochet items that she has envisioned in her head.

Her love for creating her own clothing keeps her going with it, and she is sure her love of crochet will continue over the years with new ideas always emerging in her head including visiting nursing homes.

“I’ve always wanted to go to a nursing home and crochet with them,” Emily said. “I feel like it would be really cool.”

Emily is not the only student who found herself creating her own clothes due to hesitation to buy items from a store that she would be able to create herself. Junior Ella Satterthwaite found herself buying the materials to create a dress at a garage sale after she decided to minimize the number of fast fashion companies she supported.

“I was kind of bored,” Ella said. “I went to a garage sale down the street and got this fabric that was really cool, and I thought, ‘Wow, this would make a really neat dress.’ This lady was getting rid of all her sewing supplies because she used to make all the clothes for her kids, so she had all these patterns. I picked one out for a dress. I got all the materials for less than two dollars.”

Although this was Ella’s first time working with a pattern to create a piece of clothing, she was able to contact her grandma—a previously avid seamstress—to help her with questions about the pattern.

“I called my grandma for help because she knew what she was doing,” Ella said. “I definitely ended up learning some new techniques and tricks from her on how to make it that I wouldn’t have known if I had done it myself.”

Although Ella already has a range of skills under her belt, she is always looking for new activities to try. She’s looking forward to trying crochet and attempting to create even more sewing projects.

“[I’ll definitely make more clothing as] I’ve been trying to buy fewer clothes,” Ella said. “You know, download fast fashion and sustainability and all that. So I think I definitely will be doing more sewing, especially if I get thrifted clothes and want to upcycle them.”

Ella and Emily both create clothing items that they can feel proud of, continuing to do so as they’ve realized the benefits. And for them, sewing and crocheting equate to creating clothes.

Junior Kate Sherman, however, has taken sewing a step in a different direction.

“[I sew] just pieces of fabric right now,” Kate said. “[I sew] ones that come with designs printed on them.”

She started about a year ago after she mentioned to her grandma that she was interested in trying embroidery. Her grandma bought her a kit to get started on her journey.

Ever since that moment, Kate has been embroidering anything she can find, making this craft a very cheap endeavor for her.

“All of my supplies are either gifts or things I’ve found around my grandma’s house,” Kate said.

Kate uses this creative hobby to fill in periods of time where she is bored or has nothing to do.

“There is no telling how long I can spend on [my embroidery],” Kate said. “I do a little bit to fill time and with intermittent breaks.”

Kate has had some practice sewing other items: sewing barbie clothes for her barbies when she was younger and mending holes in a large variety of items, but she is hoping to expand her embroidery to clothing as well as trying her hand at knitting again.

“I definitely want to embroider on my clothes,” Kate said. “I need to be a little more confident in my abilities before I attempt to do so, but I will certainly try it.”

All three of these students have taken skills they’ve learned through family members, on their own time, or they had learned when they were much younger and turned them into a way to express themselves whether through clothing or embroidery. And for Emily, it is something she is proud of.

“I like [crocheting] because I feel proud of [the items I make],” Emily said. “I like to show people I have a little talent, [and it’s something to do] other than being on my phone all the time.”