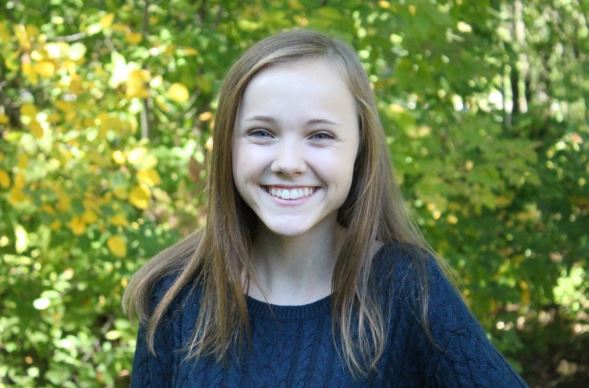 Sometimes, it’s the simple moments in life that can mean the most. For sophomore Ashlyn Fitch, she can vividly remember one of those times. While doing a script read for her first of many major theatre productions, Ashlyn was brought to tears by music.

“I had never done [a show] with a live orchestra,” Ashlyn said. “I listened to the overture, which is the first thing the orchestra plays before the show starts. I listened to that like a hundred times…the first time I heard it live with an orchestra, it brought tears to my eyes because it was so much better than I ever could have imagined.”

Ever since this exact moment, Ashlyn has only fallen more in love with theatre.

In third grade, Ashlyn became very involved in theatre. After growing up seeing her uncle on Broadway, she was convinced by a friend that she should audition for a play. Ashlyn did several shows with a program called Children’s Creations and immediately developed a passion for theatre. After doing some classes with Civic Theatre, she began to audition for them. Ashlyn had to audition multiple times before she was cast for a show.

While Ashlyn may have been rejected a few times, she landed a role with Civic in production of The Hundred Dresses. This production was put on by Civic’s Traveling Troupe, which is a group of performers that travel to different schools in the area and provide free shows to elementary students. Ashlyn believed it was a very wonderful first experience with Civic.

“It was really cool,” Ashlyn said. “Most of the kids had never seen theatre before, and it was the first time. It was really cool to be a part of that. [The Hundred Dresses] also helped build up my confidence. When I was auditioning for other shows, it made it easier to do that.”

After doing shows with the Traveling Troupe, Ashlyn performed with Civic in last year’s production of A Christmas Story. That was her first role in a large production, and it is still a very special memory for her.

“It was like nothing I had ever done in terms of the rehearsal schedule and number of shows,” Ashlyn said. “I still really miss it. I wouldn’t change any of it; I wouldn’t wanna go back and not do that, or not spend all that time working on it because it was so worth it to me.”

When A Christmas Story was finished, Ashlyn immediately auditioned for the FHC’s musical. As a freshman, she performed as Jetsam in The Little Mermaid. Ashlyn was very excited to perform in her first high school production.

“I was so excited to come to the high school, not only because it’s high school, but I had watched all the shows growing up,” she said.

Sean Ivory, vocal musical director, worked with Ashlyn to help perfect her solos that she performed. Ivory believes that she works very diligently to make her roles the best they can be.

“She’s great,” Ivory said. “She picks things up fast, and she is one of the hardest workers I’ve seen.”

While Ashlyn may have had many roles on stage, she has also worked backstage to ensure other productions run smoothly. Ashlyn spent a majority of her summer at Civic Theatre. She performed in a show, Freckleface Strawberry and then worked in the crew for another show. Last fall, she also worked in the hair and makeup department for FHC’s Anne of Green Gables. By working both on the stage and off, Ashlyn was able to understand every item that makes a production run.

“It helped me gain a new perspective and appreciation because the stuff [the crew] does is not easy,” Ashlyn said. “It was really cool for me to see that side too.”

Beauty and the Beast will run at Civic Theatre from Nov. 18 to Dec. 18. Shows will be held six times a week. Since this show is a substantial production and requires a major time commitment, Ashlyn will have a exceedingly busy schedule with many rehearsals. Ashlyn is grateful for all the support she has from her family while she does what she loves.

“My family is very supportive,” Ashlyn said. “I could have chosen something less time consuming, but I didn’t, and they are so supportive of that. Having that support from my sister and my parents has been really helpful.”

“Sometimes when she’s gone a lot, it’s hard,” Keely said. “We’re not really home at the same time. I don’t get to see her very much during her shows.”

With her busy schedule of constant practice, voice lessons, and piano lessons, Ashlyn is extremely dedicated to the theatre program and she know that she wants to pursue theatre in the future.

“This is what I want to do after I graduate high school and I want to go to college for that,” Ashlyn said.

While Ashlyn does not know what college or major she would like, she has been taking master classes to gain experience for the future. Since she is a sophomore, she still has lots of time to figure it out. But, Ashlyn knows she would like to try to pursue a career in theatre.

“It’s something I really love,” Ashlyn said. “I could spend every day doing it.”

As her big sister, Keely has seen Ashlyn grow as a person since she started theatre.

“She seems a lot more confident and outgoing,” Keely said. “She’s not as shy as she was before she started [theatre],” Keely said.

Ashlyn believes that theatre has made her into the person that she is today.

“[Theatre] causes you to mature more quickly,” Ashlyn said. “You have to use people skills and work with other people.”

As Ashlyn continues to change as a person through theatre, she will continue involving herself in many different productions. No matter how busy she may be, Ashlyn loves every single second that she gets to spend on the stage.

“There’s so much that goes into it, but I feel like it’s all so worth it,” Ashlyn said. “You don’t even realize [how much work theatre is]. For me, I could not imagine doing anything else.”