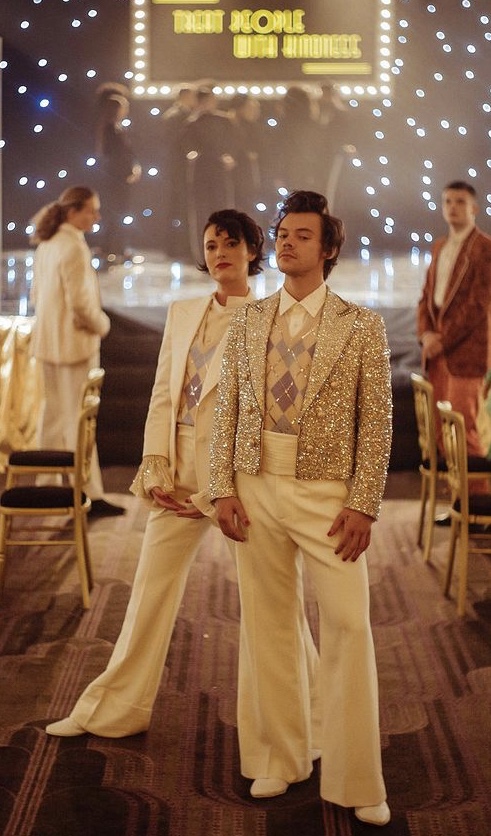 2020 was irrefutably one of the most scattered and shocking years in a long time; from protests, to pandemics, to political elections, headlining events seemed to come a dime a dozen. But, with a year full of so many eye-catching, historical events, it’s relatively surprising to acknowledge the amount of controversy that was raised by a pop star in a dress.

Harry Styles, one of the top names in the music industry, has recently been in the spotlight after appearing on the cover of Vogue in a dress. While playing with clothes and gender identity is not a new development for male celebrities—see David Bowie, Young Thug, Billy Porter, or Prince—Styles’ appearance on the world’s most respected fashion magazine managed to spark a larger conversation: a conversation which Styles kept alive in his newest music video.

Styles dropped the video for “Treat People With Kindness” with next to no warning on New Year’s Day, and despite the lack of preparation, the music video was still met with open arms and immense amounts of praise.

The music video plays on the album’s motif of color, and unlike the vivid contrast in “Adore You” or the in-your-face effervescence of “Watermelon Sugar,” “Treat People With Kindness” is entirely black and white. Heralding back to the 1930s, the music video entails Styles performing in a jazz club accompanied by a “live” band, vintage standing microphone, and an audience replete with martinis.

Building off of the song’s messages of acceptance, open-mindedness, and love, the plot line of the music video follows Styles and his dancing counterpart, played by Phoebe Waller-Bridge. Styles and Waller-Bridge’s relationship in the music video is comfortably platonic, and their dancing holds just as much storytelling as the lyrics themselves. Although, in true Harry Styles fashion, what steals the show is, well, the fashion.

Both Styles and Waller-Bridge are dressed in similarly-structured suits with matching flare-out pants, white shoes, and sweater vests, though Styles’ miraculously-sequined jacket differs from Waller-Bridge’s which is just white.

Fittingly enough, both the dancing and the wardrobe of Styles and Waller-Bridge cast a spotlight on gender roles and paints a beautiful image of androgyny. Waller-Bridge defies traditional femininity with a short haircut, shoulder pads, and minimal make-up while Styles can be seen breaking out of the mold of masculinity by wearing nail polish, an over-exaggerated bow, and large amounts of glitter.

The choreography plays a part in the storytelling by failing to let either Styles or Waller-Bridge lead, thus insinuating that neither represents the male nor female of the dance coupling. Styles can be seen guiding Waller-Bridge as the two perform a tunnel cartwheel, but Waller-Bridge evens out the dynamic by lifting Styles as well as ending with him in her arms.

The viewer’s first impression of Waller-Bridge’s character is that of someone who resides in a Gatsby-esque balance between refinement and power; Styles, on the other hand, plays a more flitting role, dancing and twirling around the stage in a bird-like manner. From the dancing to the wardrobe to even the two stars’ expressions, the music video furthers the idea that gender is losing its concrete position in society and does so without a dress in sight.

The music video for “Treat People With Kindness” is cinematically beautiful, sensational, and dynamic, and it manages to convey the sometimes controversial message of love in an artistic and poetic manner. This new addition under Styles’ belt of performance solidifies his position as a progressive, creative, and inspired artist whose best days are far from behind him.