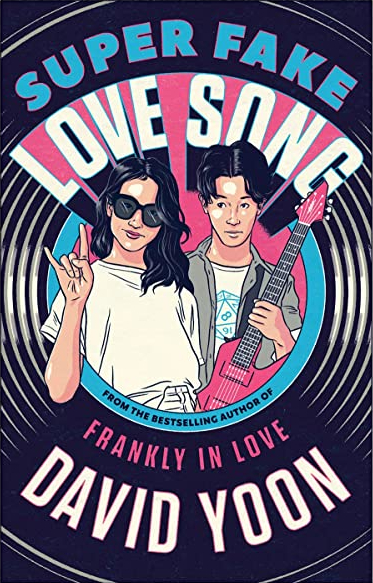 David Yoon’s Super Fake Love Song enters the life of junior Sunny Dae, who spends his days making props for his live-action roleplaying Youtube channel alongside his friends Milo and Jamal. The three of them make up the entire male minority population of their highschool.

One day, a beautiful girl named Cirrus Soh, whose parents are family friends of the Daes, moves in down the street from Sunny. On impulse, Sunny puts on a goth facade and tells his newfound crush, Cirrus, that he is part of a band. Truly, the one in a rock band is Sunny’s older brother, Gray.

Something that Super Fake Love Song did a far better job on than most romance books was the simple task of making the protagonists likable and realistic. Cirrus is naive yet has a bit of spice to her and has other things to do other than melt over Sunny. Sunny is also entertaining as he is sarcastic, nerdy, and a self-proclaimed cynic.

On top of that, the book was highly relatable and once again, realistic. It takes place in current times, and I think that Yoon captured 2020 perfectly. Sunny makes fun of his parents for having a type of car that is similar to a Tesla, and he is always mentioning facts that may or may not be accurate—the type of things that define 2020.

I personally could easily identify with Sunny’s troubles; I too have some interests that are generally perceived as “nerdy.” Sunny wants to keep his favorite activities hidden. I feel like a lot of teenagers are also going through the confusion of whether to proudly display this or hide it away forever.

The word choice and sentences structures were truly the elements that kept me going through the more romantic parts of the book. The language the characters use is crude and sloppy—quite accurate to how a teenager would actually speak. The sentence structures are not only informal but often incorrect. Instead of being irritating, though, it helped me hear the voices of the characters. Since people don’t usually speak with proper grammar and punctuation, it was perfectly valid for Yoon to write in this style.

While the book is categorized as a romantic comedy, I would hesitate to place it so surely. Yes, there is definitely a relationship between Cirrus and Sunny, but that isn’t what the book is about to me. Sunny’s family is seemingly-perfect, but his overworked parents and depressed brother—in reality—are rather broken. This leads me to believe that Super Fake Love Song could be named a family drama.

This was what ultimately stopped me from putting down the book for good. The variety and complexity of the multiple storylines, which is missing in other romance novels—such as Twilight—made the novel intriguing and suspenseful. I would not read a 300-page book solely about some utopian fictional relationship.

Super Fake Love Song was humorous, realistic, entertaining, and had all sorts of unexpected twists and turns. It was classic yet unique, and it was relatable yet so far away.