An unbearable watch, Pieces of a Woman was a heartbreaking depiction of love and loss 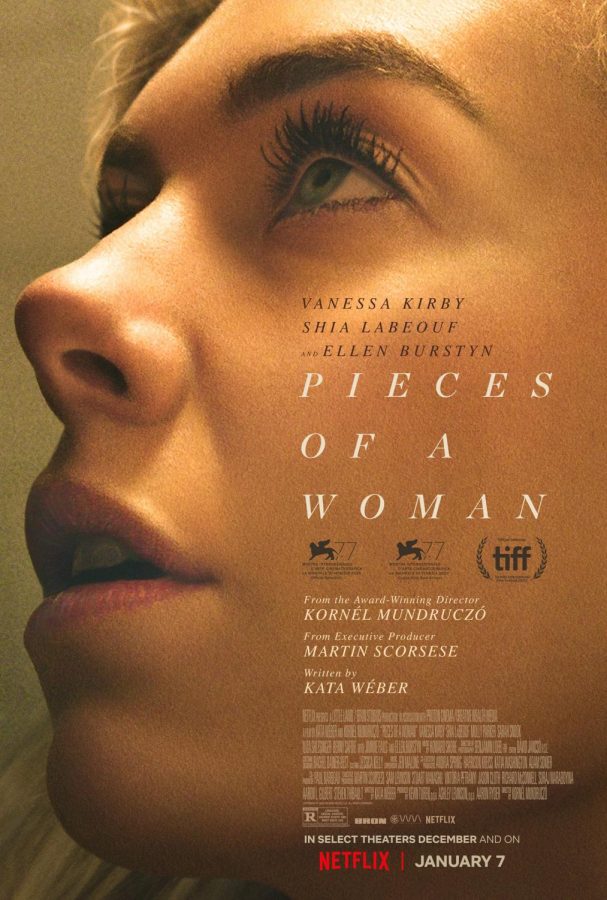 A gut-wrenching depiction of love and loss, of grief and gratitude, of life and death, Pieces of a Woman is an intense yet slow-moving Netflix film that, for two hours, explores a grieving woman’s harrowing eight-month uphill climb.

While the title screen did not appear until thirty minutes into the film, director Kornél Mundruczó wasted no time introducing the first leg of the endless uphill battle for expectant mother, Martha Weiss (Vanessa Kirby). Sharing a home and hopeful excitement for their first child, one of the initial scenes showed Martha and her husband, Sean (Shia LaBeouf), preparing for the at-home birth. The midwife they had been working with the entire pregnancy was unexpectedly unavailable, so they resorted to stand-in, Eva (Molly Parker)—who appeared to be just as qualified.

From the moment Martha’s water broke to the eventual delivery of the baby, the 30-minute introduction to the film was shot in nearly one take. It was continual, and it was linear, and it was a grim glance at Martha’s agonizing delivery. Stand-in midwife Eva acted as a gentle, kind-hearted mentor throughout the delivery, pushing through Martha’s screams and cries right alongside her, easing both her and Sean’s worries, but there was something she was hiding.

The delivery, already a harrowing look at an extremely difficult at-home birth, quickly took an even more dramatic turn for the worse, at which I will not spoil, but ambulances were called, and it seemed Eva was at fault.

And then the words “Pieces of a Woman” flashed across the screen, signifying the break in the continual shot and the wedge between the young Sean and Martha.

When I saw those words, I felt like I already watched an entire movie. Every minute leading up to that point was almost unbearable to watch; Martha’s draining birth absolutely drained me, and I simply could not imagine how almost an hour and a half of the film was remaining.

After the title flashed across the screen, everything unravelled—Martha was completely changed after tragedy struck. Martha and Sean, as both individuals and a couple, were crumbling, and they each were just watching each other fade away.

Already such contrasting characters, developed heavily by LaBeouf and Kirby’s stellar performances, the tragedy that struck them so early on was too difficult to recover from; their silence was unnerving, their tension was heavy, and their grief was grey.

There were several points where that tension came to fruition with blowout arguments, anger at each other and the world, anger at the grief they were carrying rather than a baby. These moments were heartbreaking and transcending; every actors’ performances were so real, as real as the never-ending sobs in the first thirty minutes of the movie.

However, there were many dull points, moments where time seemed to slow a little too heavily; although, perhaps that was the point of Pieces of a Woman. It was, ultimately, Martha’s continual uphill climb at such a young age, and every person in her life seemed to get in the way of that journey.

Her journey, as cliché as it sounds, made the two-hour film—riddled with rather abusive tendencies from Sean, manipulative behavior from Martha’s mother, and intense courthouse scenes with Eva as the defendant—worth it. Every scene that came after that opening title was just as tense as the opening birth scene, although the time progression was not as continual, not as fast-paced.

If it weren’t for Martha, or rather Kirby’s extraordinary depiction of her loss, of her struggle to find herself again after that loss, her struggle to stay warm despite the blanket of grief, I do not think I would have enjoyed this movie in the slightest.

It was admittedly slow-paced and a bit awkward, yet it was so touching and moving; Pieces of a Woman was not my favorite movie, but it was somehow one of my favorite films I’ve watched in a while.

And that contrast was I think exactly what the director was attempting to convey, especially with Martha and Sean’s fading characters; progress is not linear, and grief does not wait for those not willing to accept loss.

Pieces of a Woman was truly a touching film, one that I would not watch again, but one I am grateful to have seen.