The Croods: A New Age finally answered all my questions 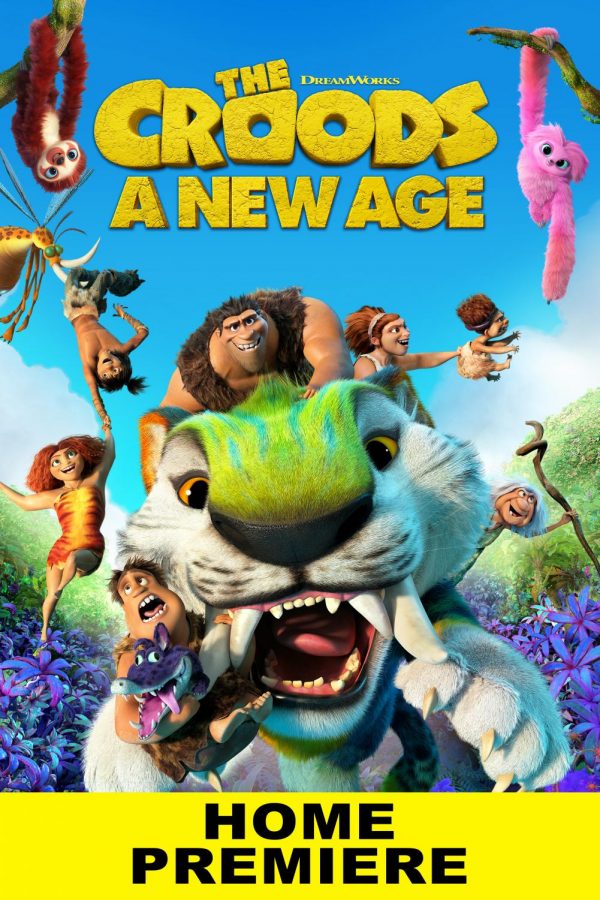 This is the movie poster for the Croods sequel.

I was ecstatic when I heard Mark Smith was allowed to make a remake of The Croods. My family and I were counting down the days until we could watch The Croods: A New Age, and I must say, it did not disappoint.

They finally followed up on the love story between Eep (voiced by Emma Stone) and Guy (voiced by Ryan Reynolds), two of the main characters of the original movie. The side of Guy that I was longing for was finally revealed along with the truth behind what made him the intelligent guy that I love.

In the beginning, this movie specifies that his parents pushed him to find “tomorrow,” finally providing some explanation, as their last wish for Guy before they left him. The quick explanation gave me some relief.

The previous movie focused heavily on the dysfunctional family that everyone knows as the Croods and the personal growth between all of them; the emphasis was on the father-daughter connection between Eep and Grug (Nicolas Cage), her father. It was highly anticipated that this next movie focused more on Guy and went into more depth about his past and former life because of the family emphasis in the first movie.

Throughout the movie, Guy is seen traveling with the Croods and pursuing Eep while her father stands in the way of their love. This strains the stereotypical father-daughter relationship; Grug doesn’t want his daughter to leave the family for a guy who happens to be named Guy. This conflict definitely inhibits their relationship.

I loved how this movie tied up all the loose ends from the first movie, moving on with the relationship and Guy’s motivations.

The family is consistently looking for a stable home which they stumble upon purely coincidentally. This allows Guy to reunite with his former family friends: the Bettermans. It ends up putting a strain on Eep and Guy’s relationship as Guy slowly conforms to their lifestyle. That only led to yet another wedge between him and Eep.

In addition to the drama Guy and Eep are wallowing in, Grug and Phil Betterman (Peter Dinklage) get into a little trouble of their own. Simultaneously, Eep and the Betterman’s daughter, Dawn (Kelly Marie Tran), slowly become friends while pushing the limits of the rules Dawn’s parents put in place to protect her from the outside world.

I relished seeing the two girls grow close even though their families were not getting along, and it was hilarious seeing the writers comparing a little bit of modern society with what it would’ve been like in the stone age.

The issues they face while accepting each other as separate families are inspiring. Seeing them push aside their differences to work together for the greater good was refreshing, but it also gave me an irrational fear of monkeys due to the main villain being connected to a multitude of evil monkeys. I think this could cause trauma in younger children who viewed the movie; it left an impact on both me and my parents after watching the monkey king.

I do hope a third movie will fully wrap up the entire story, allowing the background characters to develop more, explaining what happens to the family, and showing their dynamic in the future.

One thing that could’ve pushed the movie further they could’ve gone into more depth about Eep’s siblings Sandy (Randy Thom) or Thunk (Clark Duke) which could add a tremendous amount of depth for the movie. I would love to see more character development of Thunk and watch Sandy and Grug grow closer while Eep slowly pulls away.

My entire family and I enjoyed watching The Croods: A New Age together. They were able to explain all the unanswered questions I had lingering after watching the first movie. I really hope that they’re planning on producing another movie following the storyline.