The FHC Sports Report Podcast is a representation of pure passion 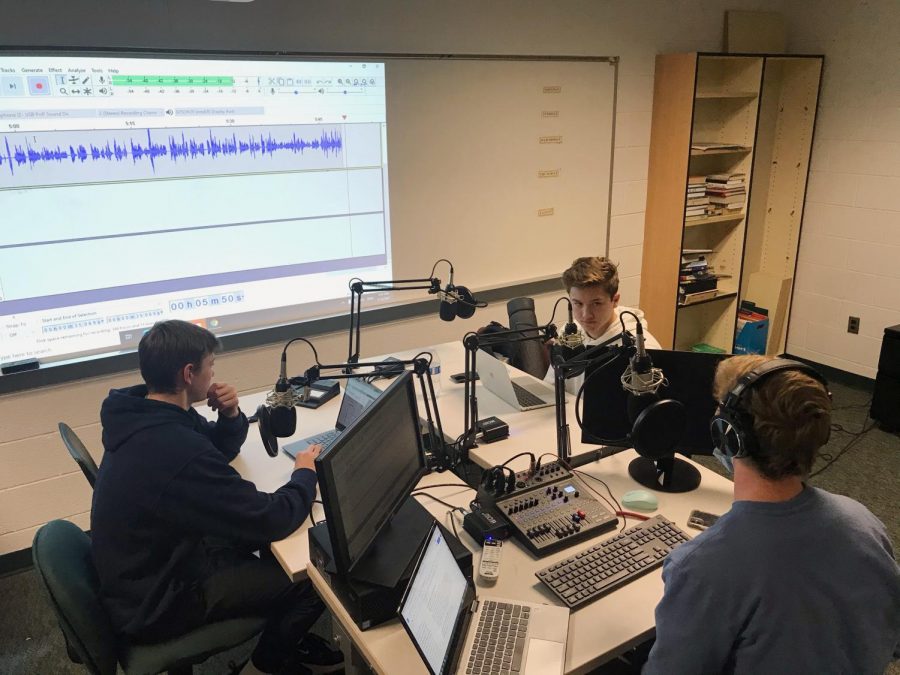 Matthew, Joe, and Pierson in the recording studio.

With just the Voice Memos app and a combined passion for sports reporting, then sophomores Matthew Mahoney and Jacob Ervin sat themselves wherever there was space, particularly the cafeteria, and just conversed.

“Sophomore year, we literally would record in Voice Memos on my phone, and someone would upload it on to SoundCloud,” senior Matthew Mahoney said. “You’d be hearing the janitors working in the back, because sixth hour is when they were cleaning up, so it was kind of a mess. We didn’t really know what we were doing.”

But, two years later and two years wiser, Matthew and Jacob have since transformed the FHC Sports Report Podcasts into a full-fledged production, covering much more than what they initially did—and eliminating the background noise of the janitors working during sixth hour.

This year, in light of COVID-19 canceling sports, The Sports Report as a whole was at a crossroads in terms of what to cover. Transitioning to covering more professional sports, both on the site and in their podcast, Matthew and Jacob have taken advantage of the new recording studio—thanks to Jon Fisher’s grant—and the unusual circumstances of this school year.

The development of the podcast, Jacob feels, has taken the Sports Report to new heights, especially considering such a unique year.

“I feel like, especially this year since there are no school sports at the moment to write about, the podcast really brings the Sports Report to a whole new level,” senior Jacob Ervin said, who is Editor in Chief alongside Matthew. “Especially at the collegiate and professional level, the sports reporters are always interviewing the players and asking the coaches questions, so this is kind of taking a new approach this year to what sports reporting really is.”

From women in sports to the NFL, members of the Sports Report head to the studio every day of the school week to cover these topics, putting out multiple episodes every week. Lead and hosted by Matthew and Jacob, they give everyone on Sports Report the chance to converse with each other just as they did their sophomore year.

Junior Joe Murdock has particularly found a liking to this outlet of sports reporting.

“Every time so far at least, we’ve gone in [to record] and not wanted to take very long, maybe like a ten-minute thing,” Joe said, who’s in his second year as a Sports Reporter, “but we’re so passionate about it that we keep talking and talking. We have a lot of fun talking about it, and I think we’re talking about the right stuff. There are times where we’ve stayed after school to work on it, just continuing to talk about sports and things that we like.”

A time commitment for all involved, especially Matthew and Jacob, actually recording the podcast is not a new feat for them. But, with the new studio came new technology and software to tackle, which Matthew admitted was an interesting concept to learn in a writing class.

In Joe’s eyes, he thinks they’re both handling the new processes with ease, working especially hard at involving everyone and diversifying their content.

“I just think that, between [Matthew and Jacob], they’ve done a pretty good job at learning the routes,” Joe said. “I mean, no offense to [Jacob] here, but especially [Matthew]—he’s pretty good with this podcast thing.”

Matthew and Jacob host the podcast on their days at school, spending a lot of time editing the show after school in order to put it on Spotify.

“Most days, I’m there until 2:45,” Matthew said. “We finish [recording] at like 2:20, 2:30, and then I have to [edit]. It’s definitely a time commitment. We come into [the studio] with some research and stuff, but I feel like it’s best to not have anything scripted. It’s good to have these conversations [with] people interrupting and stuff, and it seems a lot more natural.”

And while Matthew is still undecided on what he’ll study in college and Jacob seeing sports reporting as more of an interest rather than a career, every aspect for both Joe and junior Pierson VanGorp—the community, the passion, the interrupted conversations—of this podcast has sparked their interests in studying sports journalism in college.

“This is something I definitely want to go into,” Pierson said. “I either want to be an announcer or a sports journalist that has my own podcast. I think that would be something that I would do pretty well at, so this is kind of setting forth my journey into this business.”

Joe has been heavily influenced by the upperclassmen of Sports Report, particularly Matthew, and hopes to be that same influence for Pierson—who is in his first year on staff.

Getting as many people involved in the podcast as possible, the group simply has fun covering the wide range of topics that they do, advertising each episode on their Instagrams.

Reaching a loyal audience, the FHC Sports Report Podcasts is representative of the group’s camaraderie and pure passion for what they do. From the cafeteria to the recording studio, the podcast has slowly developed into what it is today, and to Matthew, that is what sets the Sports Report apart from other publications.

“Ever since I took over after spring break sophomore year, [Sports Report advisor Ken] George and I always talked about expanding,” Matthew said. “Obviously, the actual writing aspect is cool, but we’ve always talked about expanding to video, podcasts, and media because that’s what would really set us apart. [The podcast] is what sets us apart, and [it’s] what makes us one of the coolest publications in the state.”