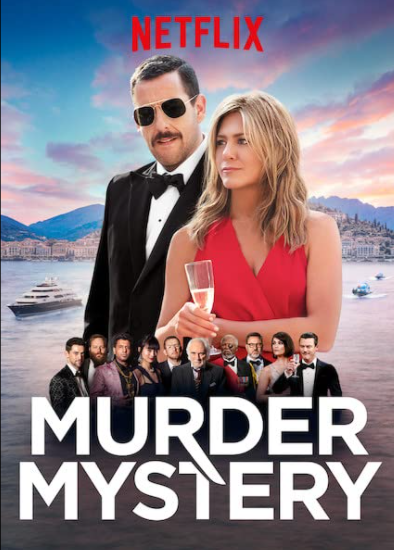 The poster for Adam Sandler and Jennifer Aniston's 2019 movie Murder Mystery on Netflix.

Bedtime Stories was my childhood. Adam Sandler has created an irrefutable reputation as a phenomenal comedian in my mind.

Friends is a must-watch television show that I have been searching for another way to watch since it left Netflix. Jennifer Aniston’s legendary character Rachel Greene, a pop culture icon, caused millions of women to flood the salons asking for “Rachel hair.”

When scrolling through Netflix looking for a movie to watch with my family, I was shocked to see Aniston and Sandler in the same movie. Of course, I was intrigued.

Murder Mystery follows the story of a New York cop, Nick Spitz (Adam Sandler), and his wife Audrey (Jennifer Aniston) going on a long-overdue honeymoon to Europe. Nick and Audrey are approaching their fifteenth wedding anniversary and Nick has yet to bring Audrey on their honeymoon. In a very sudden turn of events, Nick buys last-minute tickets to Europe the night before their anniversary in hopes to reignite the spark of their marriage.

On the flight, while Nick is asleep, Audrey sneaks into the first-class bar area of the plane. It is there that Audrey runs into Charles Cavendish (Luke Evans), the dashing nephew of billionaire Malcolm Quince (Terence Stamp). Charles is quick to invite Audrey to stay in the bar with him, rather than go back to her cramped seat. Nick finds Audrey and Charles chatting and is understandably suspicious.

Charles invites both Audrey and Nick to his family vacation on a yacht. Audrey happily accepts on behalf of both of them. Charles’s vacation is to celebrate the marriage of Malcolm. Malcolm married none other than Charles’s ex-fiancee Suzi Nakamura (Shioli Kutsana). The festivities soon sink into despair when Malcolm announces changes to his will. Soon after, Malcolm is murdered. Nick and Audrey are immediately framed for not just Malcolm’s murder but several others.

In a slew of murders, new information, and high-speed car chases, Nick and Audrey solve the murder with no help from Inspector de la Croix (Dany Boon).

The entirety of Murder Mystery seemed like a game of Clue, but everyone knew the weapon and location of the murder; they were just trying to find out the murderer. I was never any good at Clue, and my predicting skills of the movie mirrored that.

Aside from rudely displaying my lack of detective skills from a movie, Murder Mystery incorporated a small bit of foreshadowing and what I consider to be a nod to Sandler’s movie Bedtime Stories.

At the beginning of the movie, Audrey is reading a murder mystery book and trying to figure out who the fictional killer is. Nick casually tells her it’s the most obvious suspect; he says that’s how things always go in real life and in books. Audrey is forced to believe him as Nick is a detective in addition to a police officer.

The honorable mention of Bedtime Stories occurs near the end of Murder Mystery. Nick and Audrey hop into a red Ferrari. For anyone who has seen Bedtime Stories, they know that Sandler’s character has a yearning for a cherry-red Ferrari. This small detail has made me incredibly happy, seeing as I love Bedtime Stories. I am not entirely sure this was included for a reason, or if it was just a coincidence. In my mind, it does not matter.

This 2019 film is on my must-watch list for anyone and is likely to become one of my few comfort movies.