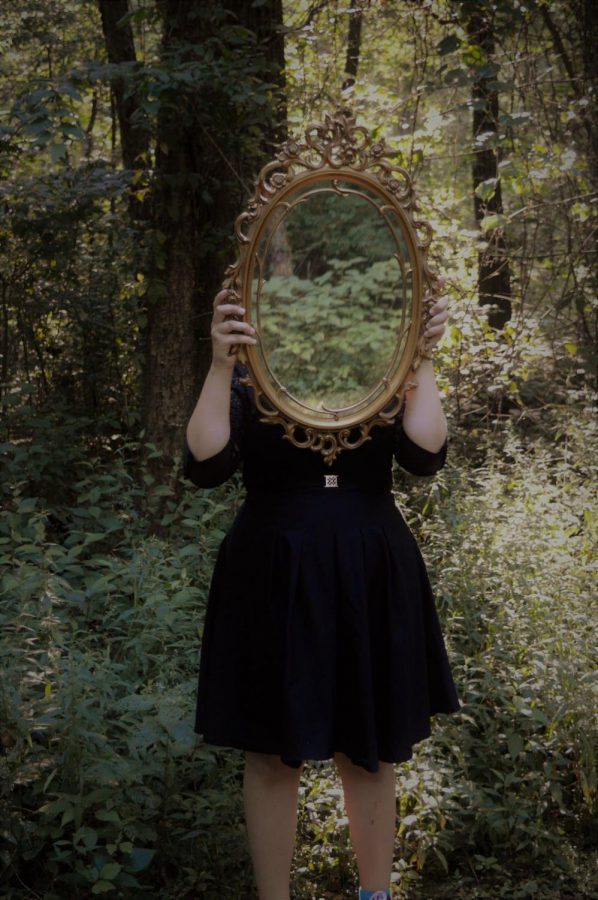 A girl standing in the woods, hiding her own reflection with the beauty of nature.

Her beauty astounded nobody but herself,

and she told herself that was fine.

Her devilish smirk and silver eyes were just

nice. Yet she wanted to be revered—to have a shrine.

So she took what she had, just a menial collection

of the eyes of others and the souls of some,

and examined it all—every inch, every bump.

Yet with all she collected, her collection was none—

every aspect she gleaned from others,

copying their every breath and flip of hair,

melted to indecipherable puzzles of wonder.

To her knees, she fell. Her pale skin warred

with the knotted pine she called her foundation,

waving their white flag in streams of red and dreams unheard, refuting to end this fixation.

Taking her nails to the wood to see it crumble,

as if starting over would change the fact that

And so she took a bat to her collection and watched it shatter,

the glass jars of mismatched characteristics, her own carnage.

under heat, under pressure, under duress, she was nothing more than a carcass.

Her coloring was stains of others, and with her lips

of ecstasy, the lies that slithered out to others, even herself,

convinced her that these stolen bits, this inauthenticity,

was what they were all doing to be themselves.