Inauguration Day in the classroom: a Q&A with Dr. Keller 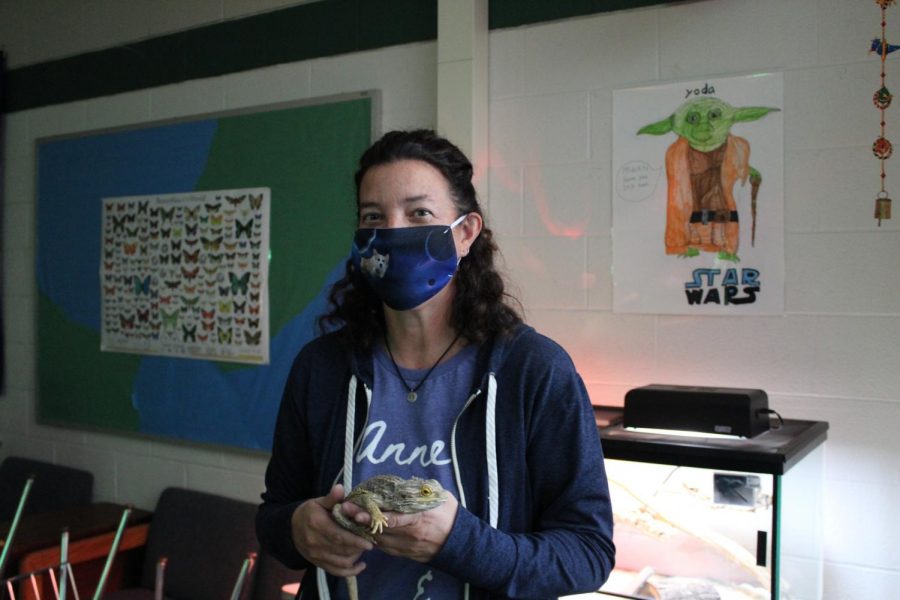 English teacher Dr. Keller, standing in her classroom, holding one of her pet lizards, Lamont

“So when my 5th hour came in, it was the tail end of Biden’s speech, so they caught the tail end of that. Then I showed just a snippet during third hour. I think [everyone] was just arriving on the scene. Then in fifth hour, I showed the poet reading her poem.”

So how do you think that the whole inauguration, but specifically the poet’s piece, ties into the education that you’re trying to provide for your students?

“I teach English and poetry, so I thought that was a very direct link, and we looked at the interview from PBS News Hour [with] the poet yesterday in all my classes, I believe. In certain classes, we’re talking about social justice, and I feel like the poet expressed some of those ideas in her poem. She actually used the word justice in different ways after listening to it again. And then in my ninth grade class, we were looking at the Odyssey, which is an epic poem. So [we’re] trying to look at how far poetry has come from ancient Greece as a cultural art form. How do you capture a moment in history through poetry?”

Why do you think it’s important for students to tune into a historic moment like this?

“I think one of our goals in education is to help students be informed citizens, and I think that no matter your discipline, you should be aware of what’s going on in the news and also at moments like these that are important moments. We don’t have that many inaugurations, and I feel like that’s an important moment to tune in. This is the first time we have a woman as a vice president, and I think that is a huge historic moment, and for girls and boys to see that I think is very important. I think it shows that we are informed and that we care about our country and the ideas that democracy represents.”

Did you have any experiences like this one in your education experience, and if so, how do you feel that was beneficial to you?

“You know, when I think back in terms of inaugurations, I feel like those were things that we watched on television. So I think I come from a little bit [of a] different experience being older. We didn’t have the internet; we wouldn’t have been able to project something like that. The ones that stand out are actually more like tragic events, like the Challenger explosion; that was something that was shown when I was in middle school, and I remember that, of course, being a very sad moment. Especially [because] there was a teacher who was on board, and that was startling. Then as a teacher, I remember [watching] September 11 [and] sharing that with classes. I always try to bring in what’s current and try to connect it to what we’re doing in some way. I just think as members of a society we all need to be sort of aware of what’s going on and have a conversation no matter which side you’re on, and I feel like the new president made that message pretty clear today. That’s one of the great things about our country—we do have differences of opinion, and we can discuss them in a peaceful way.”