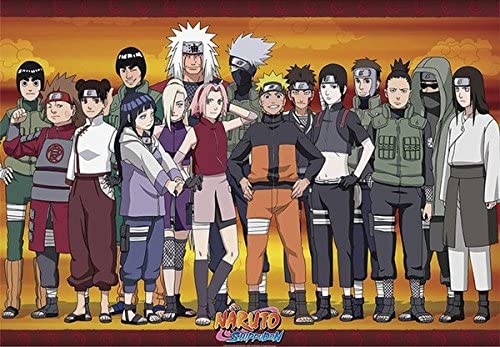 Naruto, one of the most popular animes of all time

Sophomore Mrrudhula Perumal looks up to a young girl named Emma. While most people’s heroes are a celebrity or a family member, Mrrudhula is in awe with an anime character.

“[I look up to] Emma from The Promised Neverland,” Mrrudhula said. “She’s really resilient, and after she’s gotten dragged down by everything, she still wants to go on.”

Although they are fictional characters, anime characters can be a masterpiece of inspiration and someone to look up to for many anime fans.

But not all anime characters are your traditional heroes. An anonymous FHC junior looks up to Kousei Arima from a popular anime by the name of Your Lie in April—not because of his overwhelming uniqueness but rather because he is seemingly average yet emotionally complex.

“He started off very relatable to the common student: not super motivated all the time and living a pretty average life,” the junior said. “But later on, you get to see more of his backstory with piano and the emotional connection he has with it. Focusing on something consistently isn’t really my forte, so I really admire him for his ability to go from being your average student to someone who has the motivation to not only keep up with being a student but also to practice consistently and be an exceptional pianist.”

The complexity of the characters in the show goes to prove that anime, contrary to the beliefs of many, is not just kids’ shows. The plot, scenes, and language of many anime shows are either inappropriate for young children or difficult to understand.

Even the people who enjoy anime are sometimes looked down upon for having either bad or childish tastes. Sophomore Daphne Calin believes that while anime isn’t for everyone, the stereotypes surrounding the genre do not do it justice.

“There are plenty of stereotypes of what anime is like or what people who watch anime are like that draw people away from actually getting into it,” Daphne said. “However, there are so many different genres and styles beyond repetitive kids’ shows.”

Mrrudhula agrees. There are animes out there such as Pokémon, Digimon, and Yu-Gi-Oh! that are designed for younger audiences, but there are also animes specifically for adults, so there are actually shows for all age groups.

“Obviously, cartoons are shown as ‘for kids,’ but it’s usually the storyline that counts,” Mrrudhula said. “A lot of the storylines are beyond what kids could understand. But, it depends on the show.”

While COVID-19 has pushed distance between many friends and families, Daphne has found a way to connect with her friends through this form of entertainment they all enjoy as they all enjoy these often complex plots in anime.

Although they cannot gather to watch anime together, simply expressing their verbal enthusiasm is enough for Daphne’s friend group. Just like any other television show, there is always chatter about the characters and plots with each new season released.

“Most of my friends and I have only gotten back into anime after [COVID-19] began, so the main thing we do together with it is [discussing it],” said Daphne, who has been watching anime on and off for around seven years. “[We look] to each other for recommendations, [so] there’s a lot of overlap in what we’ve watched. It’s pretty easy to have long conversations about how much we like a character or how disappointing a show was.”

More recently, these Japanese-based shows have been experiencing an explosion of popularity. From social media to t-shirts worn on the street, anime has been snagging the interest and popping up in the lives of many.

Thankfully, the community, or “weebs” (people who love Japan and aspects of its culture), are rather excited about welcoming newcomers.

“I think it’s a great thing,” the junior said. “Anime used to be considered something only weebs did. We’re getting rid of the stereotypes that go along with watching anime, and it’s turning into something that’s not only easily accessible but also acceptable and widely enjoyed.”

Mrrudhula also believes that it’s a great thing for anime to be spread across the United States and other places outside of Japan because it’s not only a fun activity to socialize about but also a great way to destress and wind down. Featuring beautiful art and animations, the Japanese shows are a perfect way to relax.

And as this genre has many sub-genres within it, there is something out there for everyone at any time for every emotion, always providing a story to get lost in.

“Anime provides a way to escape the stress of life for a little while and experience a connection with something new,” the junior said. “I find it to be great when I want [to be motivated], uplifted, or even [have] a good cry.”