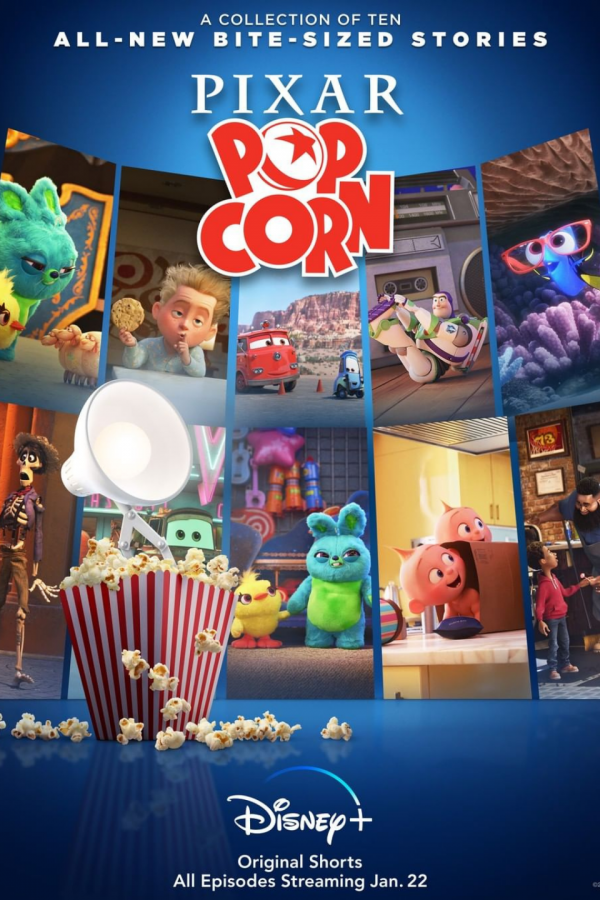 This is the Pixar Popcorn Poster showing a preview of the ten shorts.

My favorite part of Pixar Popcorn is not what you would expect from this short little collection.

The arrangement didn’t have too much packed into it; I guess there’s not an incredible amount of content you can cram into within twenty minutes. But honestly, I was expecting more from Pixar.

The little mini-movies were fun to watch, but I don’t think I’ll go back and watch them again. I don’t necessarily have a problem with them, but they just didn’t seem that wondrous. I definitely wouldn’t use the words surprising, action-packed, or memorable to describe them.

Again, I didn’t really have an issue with them; there just isn’t much substance to make the films featuring well-known characters very unforgettable.

What seemed the most strange to me was the fact that there wasn’t much dialogue exchanged in most of the shorts.

The only two characters that spoke a word were the stuffed duck and stuffed bunny from Toy Story 4. These two fluffy buddies did enough talking to make up for the rest of the silence in Pixar Popcorn. Ducky and Bunny were simply in an argument that had no end in sight, and as an audience member, it just seemed like the rambling scene was unnecessary.

There are only ten total shorts in the collection, and Bunny and Ducky made up two of the ten appearances—both times filling the silence with rants and arguments about really useless topics. Though they are known for their constant bickering as part of their character build in Toy Story 4, I don’t see the need to make a whole Pixar short dedicated to them.

Sadly, my favorite part of the film collection was the small intermissions in which the famous Pixar lamp would do its normal routine of hopping across the screen to signify that this was indeed another motion picture by Pixar. However, this time, little elements of a popcorn theme were added into the scene.

The silver lamp was bouncing on one of the letters that make up the word “Pixar” while popcorn came out of another letter in one instance, and the lamp was heating a popcorn kernel with its lightbulb, making the popcorn explode all around it another time. Either way, I looked forward to each creative way that the popcorn would be integrated into each appearance between shorts.

As I watched more of the shorts, I realized that I was looking forward to seeing the lamp come back more than I was to view the next short. Not that this is a bad thing, but I’m not sure this wasn’t the impression that Pixar was going for.

Don’t get me wrong, it was fun to see the beloved Pixar characters doing different activities related to their personalities and movie themes.

My favorite short is Dancing With the Cars. It was the most entertaining, and this one, I can admit, didn’t need any dialogue to be satisfying.

The cars in the original three movies are all famous for their different styles of doing pretty much anything, and this short encapsulated all their individual musical opinions. A jukebox is placed in Flo’s V8 Cafe, and all the cars get a chance to dance to their favorite music genre—Fillmore dances to rock music, Italian music comes on for Luigi and Guido, and the “pities” dance to pop.

I enjoyed seeing how this short made a story out of the two minutes they were granted, unlike most of the other ones that seemed empty.

Without any spoken words or substance to most of the shorts, they just weren’t very memorable. The ending left me saying “that’s it?”

Some moments were cute and clever like the ones of the cars, but others just needed some more of something that would’ve given it the little nudge to help it stick in the viewers’ minds.

I can confidently say that the Pixar lamp scene was my favorite part due to its creativity and variety. While that was most likely not the image that they were going for, at least I found some enjoyment in the bite-size pieces of Pixar.