Bela Gonzalez has formed international bonds from a nearby sport 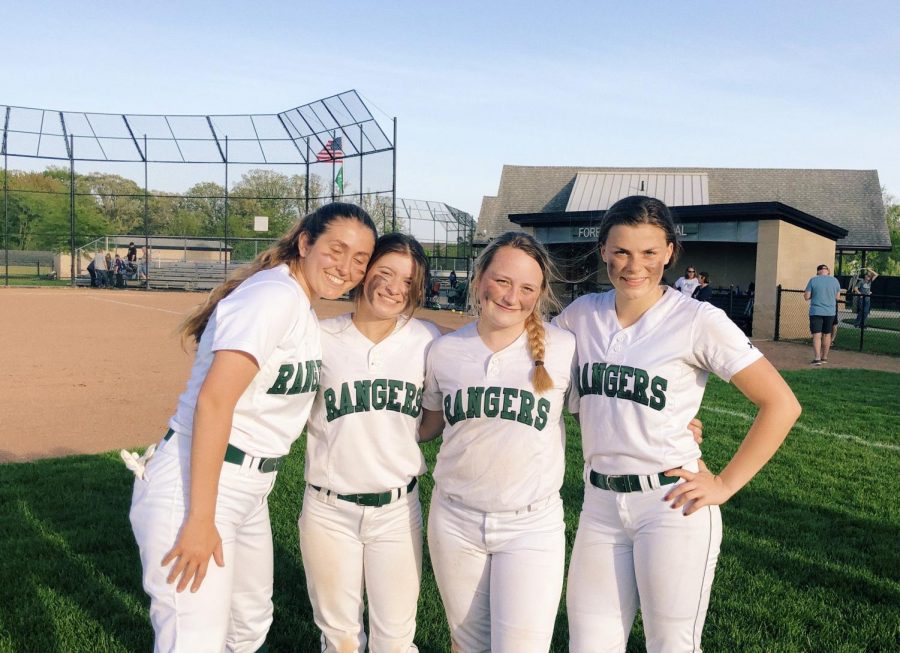 Bela Gonzalez (middle left0 with Irene and her other softball teammates.

For senior Bela Gonzalez, softball is more than a sport; it’s a way to form connections, from local buddies to faraway friends.

Bela has been playing softball since she was five years old. Her mom played softball in high school and hoped Bela could get as engaged in it as she was. So, with encouragement from her mother, Bela started playing through the YMCA on a T-ball team.

“[Softball] was just something really convenient [for me],” Bela said.  “So [I] did it through the [YMCA], and I played T-ball with a bunch of boys.”

It was from that fateful T-ball team that Bela discovered her love of softball. She went on to play for little leagues, a travel team, and the high school’s softball team. Bela played on the travel team, the Warriors, up until last year—meaning she played for five years on one team in addition to the last four years on the high school team.

Bela is exceptionally grateful for her opportunity to play on the Warriors team as she was able to expand her social group.

“[The] Warriors team is really different,” Bela said. “I met people from schools [that] I didn’t even know existed. I didn’t even know West Catholic existed—I didn’t think that [school] was an actual thing, but I met so many people from all over Michigan. It was super hard at first to talk to people [on the team] because I didn’t know anyone; it was all just new girls, and [a lot of them] would leave at the end of the year.”

Bela slowly grew out of the shyness that accompanied her to her first year on the Warriors team. As she met more girls, she wanted to stay on the team even more.

“My first year it was only me and this other girl that stayed [on the team], and we continued to stay for the next five years,” Bela said. “I’m not [very] close to them now, but it’s super nice once you meet everyone [on the team]. [You end up making] friends forever.”

The friends Bela has made from softball do not only consist of Warrior teammates; she also met an exchange student from Italy.

During Bela’s sophomore year softball tryouts, she met a girl who had just arrived from Italy. The girl, Irene, was a senior staying with a host family of a student in her same grade. Bela started talking to her and instantly made a connection.

“She tried out for softball looking for a spring sport,” Bela said. “I saw her at tryouts and [we started to] talk a little bit. [It wasn’t] about much, just stuff like ‘Oh Italy, how’s that? Why are you here? You want to come study for a bit?’ Just small things like that. Then we became really close friends.”

After Bela and Irene spent some time getting to know each other, Bela went back with her to Italy.

“I went [to Italy] the second school got out for the summer vacation,” Bela said. “My family had been planning a trip to go back to Italy because I went in seventh grade. It was so convenient because [Irene] was going back at the same time.”

The trip to Rome, where Irene lives, turned out to be a final goodbye for her and Bela. They were still determined to make the most of it.

Irene showed Bela around the city and took her to the “typical” tourist destinations, and their friendship serves as a reminder of softball and the life-long bonds Bela has had from it.

“I have a picture actually of us standing right next to the Colosseum,” Bela said. “[Irene] took a picture and she said, ‘Hold up your hands like you’re going to move the Colosseum or something.’ I did, and it looks super cheesy and dumb. Then, I made her do the exact same thing, kind of holding it up [with our hands].”