Feeling the love in the CI Resource Room 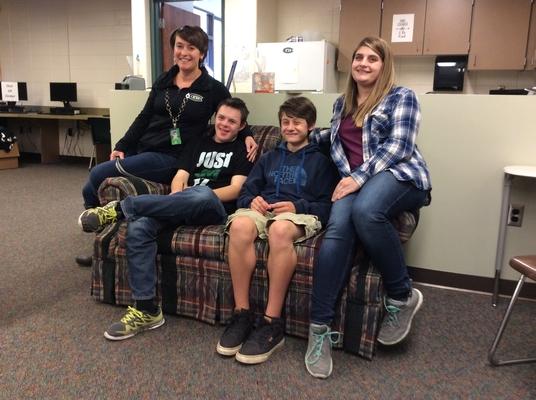 Entering the resource room for the cognitively impaired, any student is instantly accepted as a part of the bunch. The ambiance is empowering whether it be from special education teacher Kara Kimball’s soothing voice and radiant smile, paraprofessional Becky Haywood’s drive to believe in her students, junior teacher cadet Zoe VanLeeuwen’s profound capability to do well at her job, senior Johnny Burr’s immense confidence, sophomore Aaron DeCosta’s quiet but secretly total sweetheart personality, or Christian Beckering’s polite willingness to befriend anyone who stops to say hello.

“The kids [are the best part], and the fact that every day is so different,” Haywood said. “Every day is a new day, you never know what it’s going to bring,” Kimball said.

Kimball and Haywood are the teachers for the particular class which occurs during first and sixth hour. Between those two hours, the students are out in the general population learning with the rest of their peers.

At the end of the day, they reconvene to talk about and learn things that pertain more to the students’ mental levels. This way, they start and end their day with education that is specifically catered to them, to their pace, and to their capabilities.

Between first and sixth, they go to general education classes with Mrs. Haywood in order to interact with outside population.

Few people go out of their way to talk to the students in the resource room, so they are mainly with each other every day.

While Kimball and Haywood wish others would reach out more and attempt a friendship with their students, they do recognize the bond formed between those in the class.

“They’re very close…they really do stick up for each other,” Haywood said. “I like to say they’re kind of like [siblings]. Sometimes they [argue], but boy, if one of them is gone, it’s always, ‘Where are they at?’ ‘What’s wrong with them?’ They always check on each other. I think that friendship goes beyond the school.”

Each kid has his or her own level of intellect and capability to understand, but they all have a profound sense of love, humor, and friendship.

“I help my friends when they don’t understand the math,” Johnny said. “I jump in there, and they help me too.”

Aaron, Johnny, and Christian learn together and help one another out, but they believe Kimball and Haywood are the true source of their knowledge.

“I’d say [the best part] is the teachers,” Aaron said. “They’re so kind; Mrs. Kimball is a wonderful teacher. I’m privileged to have her. I was in a normal school before, then I came here. I feel privileged because the kids that don’t go to this school…don’t have proper teachers. I feel wonderful to be in that class, I’m thankful because Mrs. Kimball has really been working hard to teach us. Students come to that class because Mrs. Kimball knows how to teach students with special needs. I learn better in that class; new stuff, new things, it’s pretty cool.”

Kimball and Haywood have revolutionized these students to be the best that they can be and made them feel welcome.

The students have grown on them, and they have formed a close bond and gained the students’ trust as teachers. Not only through school, but also through emotional connection,

It took a while to become accustomed to Kimball and Haywood, but this year they also adopted a teacher cadet of their own, Zoe VanLeeuwen.

Initially wary of others and not willing to open up, they eventually accepted her into their little group and now call her ‘Miss Zoe Teacher.’

“Sometimes the kids will be in different moods, so each day you have to adapt to it…If you’re not patient, they’re going to get frustrated because you’re rushing through it, and each kid in that class learns in a completely different way, so you need to be patient in finding out how they learn,” VanLeeuwen said.

Every kid in the room aware of the fact that they struggle to learn certain things and able to admit that they need help, they are still exceptionally confident in their abilities and knowledge.

Confident in themselves and confident in each other, they are the sweetest kids who band together, and they are worthy of the friendship of every person at FHC and beyond.

“Nothing’s hard about being in that class,” Christian said. “I have a smart brain.”