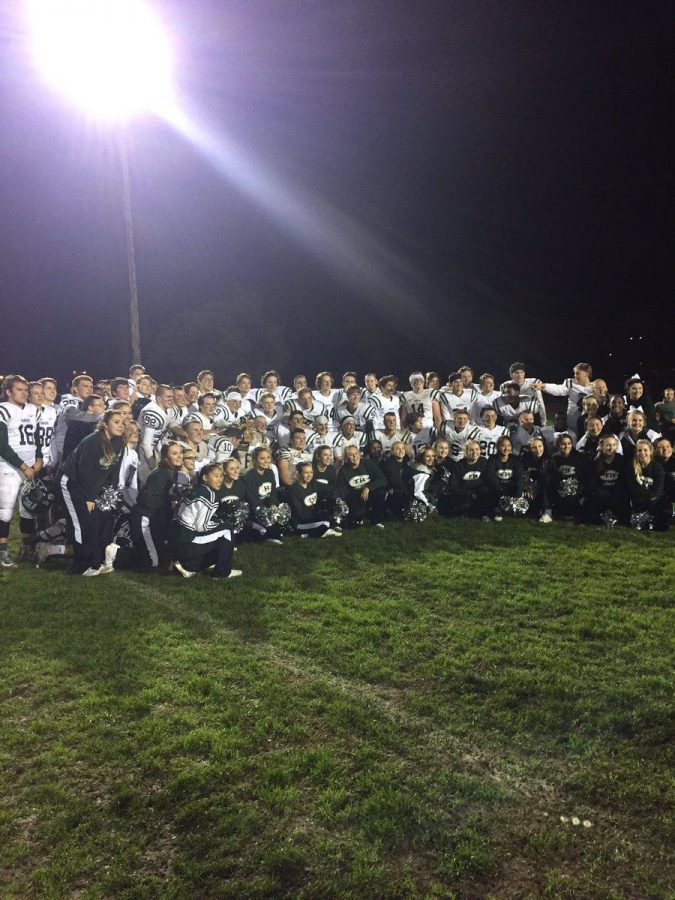 FHC football has been overlooked this whole season by those outside of FHC, but on Friday night at Portage Central the Rangers made a big statement.

It was either a loss and a silent bus ride home or a win and a chance to survive another week.

FHC advanced to the next round with a 27-13 win over Portage Central to claim its first district title in more than 20 years.  The win sets up a rematch at Lowell next Friday night.  Earlier in the season, FHC lost a heartbreaker to the Red Arrows after leading by 17 points three separate times in the contest.

Tanner and Jack both knew how important this victory was for the team and community.

“All the hard work has paid off,” Tanner said. “All the beatings that we’ve taken in the past, to the new conference this year, that didn’t mean anything to us. Just playing our game was a big deal.”

“It’s unreal,” Jack said. “ Forest Hills Central hasn’t had this in forever; just to have one team do it is amazing.”

The game started out with Portage Central receiving the kickoff; after a long drive, the Rangers’ defense held the Mustangs to a field goal for the first points of the game. FHC, on the other hand, suffered a three and out on its first possession and was forced to punt. Later on in the first, Portage Central was driving on the Rangers and gaining big chunks of yards play by play. This time it looked like it was going to be more than just a field goal for the Mustangs as they were just a few yards away from six points. However, on the first play of the second quarter, the Rangers recovered a Portage Central fumble on the three yard line that would give FHC possession deep in its own territory.

A couple plays later, Portage Central tackled the Ranger ball carrier in the end zone for a safety to expand the lead to 5-0. It was the first safety FHC surrendered all year.

Then came what Jack called the biggest play of the game for FHC on Friday night. With things looking bleak for the Rangers, senior safety Anthony Delapp provided some light with an interception to set up FHC on the Portage Central thirty yard line midway through the second quarter.

“That was actually the first play I went in on defense,” Anthony said. “I wanted to help the team out; I wanted to give them a spark, and I was able to do that.”

Anthony’s pick proved to be huge because it only took a couple plays for Tanner to find Bryce for the Rangers’ first touchdown and first lead of the game. After the extra point was tacked on by junior Daniel Riser FHC took the lead, 7-5, going into the half;  it was a lead the Rangers would not relinquish for the rest of the night.

The second half turned out to be the Tanner and Jack show — at this point it has become routine — but each time it gets better and better. Leading into this game it had been confirmed that Jack had a slight ankle sprain. However, the ankle looked just fine on his first touchdown reception early on in the third quarter that gave FHC a 14-5 lead.

After his touchdown on offense, Jack was playing defensive back when the Mustangs were back on offense. It was only a few plays until the name ‘Jack Uecker’ was announced over the P.A. again, but this time, for an interception. Jack was not done yet and managed to blow by Mustang defenders, just shortly after his pick, on his “weak ankle” to record yet another touchdown within minutes of his first one.

Just one day prior to the game, the Ranger Rundown had the opportunity to interview senior linebacker Sal Sidebotham. Sal had this to say about Jack in regard to his injury and the type of competitor he is.

“He’s probably our biggest offensive weapon besides Tanner, who throws him the ball,” Sal said. “I’ve never seen a guy like Jack who can create space for himself. I mean I haven’t seen him drop a pass all year; I don’t think he has. As of now, he’s good to go.  He’s one of those weird guys where he can get hurt or even if it’s minor or major and it just seems like he’s fine, he doesn’t care, he’s ready to play.”

Head coach Tim Rogers had very high praise for his wide receiver/defensive back following the game.

“He’s a threat every time he touches the ball,” Rogers said. “Whether it’s on special teams, or on defense, and especially on offense, he’s a guy that’s a game breaker.”

Late in the third quarter, Portage Central cut the lead to 21-13 to make it to a one-possession game. FHC had other plans, though. With time working against Portage Central late in the game, Tanner zipped the ball to Jack and he was able to break free and do the rest for a forty-eight yard touchdown that just about sealed the Rangers’ statement win over Portage Central.

“It’s fantastic,” said Rogers following the win. “I mean, there’s been a lot of hard times in the last five years; it all paid off today, so I’m really excited for our boys.”

After the win, players and coaches knew that in a week they would be facing the 11-0 Lowell Red Arrows on the road next Friday at 7 p.m.

“That’s all we have in have in our mind: payback,” Anthony said. “We should have beat them the first time. We all ended that game crying. We’ll remember that feeling, and we’ll be ready for Lowell.”